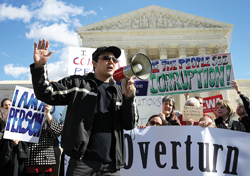 Coffee party co-founder Eric Byler speaks during a protest outside the Supreme Court in February. His group, along with Common Cause and Free Speech for People, urged the high court to overturn its 2010 ruling that made super PACs possible. Photo by Alex Wong/Getty Images.

After Newt Gingrich became the victim of attack ads paid for by Mitt Romney’s $30 million “super PAC,” Gingrich struck back with his own. His Winning Our Future political action committee hauled in at least $10 million from a loyal casino multimillionaire.

And, while observing the damage done by Republican super PACs, President Barack Obama’s re-election campaign decided to use administration and campaign aides to raise his campaign’s own funds.

These multimillion-dollar PACs were made possible by Citizens United v. Federal Election Commission, the controversial 2010 U.S. Supreme Court decision that struck down parts of the Bipartisan Campaign Reform Act of 2002, aka the McCain-Feingold Act, which placed limits on corporate campaign spending. Super PACs can accept unlimited corporate contributions and make unlimited expenditures for—or against—federal candidates like Gingrich and Obama.

But while super PACs are enlivening the 2012 campaign, the Supreme Court may not yet be done with Citizens United. In late February it stayed a surprising Montana Supreme Court ruling that stunned election experts by ignoring Citizens United altogether and upholding the state’s ban on independent corporate spending in state elections.

A petition for a writ of certiorari was filed March 27. If the court accepts the petition, the case will be argued during the court’s 2012 session—possibly in time for election day, Nov. 6.

In granting the stay, Justice Ruth Bader Ginsburg, joined by Justice Stephen G. Breyer, said that “Montana’s experience—and experience elsewhere since [Citizens United]—make it exceedingly difficult to maintain that independent expenditures by corporations ‘do not give rise to corruption or the appearance of corruption.’ ”

A petition for cert, Ginsburg continued, “will give the court an opportunity to consider whether, in light of the huge sums currently deployed to buy candidates’ allegiance, Citizens United should continue to hold sway.”

Since it was decided, Citizens United and super PACs have become major political issues. Even the president, despite having his own super PAC, publicly derided Citizens United in his 2010 State of the Union address.

Dealing with the messy intersection between campaign finance and the First Amendment, Citizens United held that the government cannot prohibit independent and indirect corporate expenditures on political speech, essentially granting for the first time First Amendment rights to corporations.

Justice Anthony M. Kennedy’s majority opinion concluded “that independent expenditures, including those made by corporations, do not give rise to corruption or the appearance of corruption.”

In a 90-page partial dissent, Justice John Paul Stevens, joined by Justices Breyer, Ginsburg and Sonia Sotomayor, warned that the holding “threatens to undermine the integrity of elected institutions across the nation.”

The Montana opinion “exposed the falsity of Citizens United’s construct,” says Richard Hasen, a law professor at the University of California at Irvine and a campaign finance expert. The court misguidedly dressed up a value judgment—that independent corporate political spending does not corrupt—into a fact, thereby obscuring the issue, Hasen says.

In contrast, the Montana court showed as a matter of evidence that independent corporate spending can corrupt. Hasen adds that “what the Supreme Court in Citizens United should have said is: ‘We don’t care if it corrupts or not; the First Amendment is worth the risk of corruption.’ ”

The case, Western Tradition Partnership v. Attorney General, decided in December, held that the limits on corporate political spending established by the Corrupt Practices Act, enacted in 1912 by a citizens’ initiative, survived Citizens United’s strict scrutiny test because the state produced evidence of actual political corruption by groups akin to those seeking to overturn the ban.

Even in dissenting, Justice James C. Nelson argued that Citizens United, which he said he was bound to follow, was misguided, stating that “the notion that corporations are disadvantaged in the political realm is unbelievable.”

Trevor Potter, co-chair of the advisory committee to the ABA’s Standing Committee on Election Law and head of the political law practice at Washington, D.C.’s Caplin & Drysdale, believes that even the Citizens United majority “must be surprised at how badly this has gone, not only in the president openly criticizing the court but also in the public furor. The decision was based on a misunderstanding of the consequences and of the law, and we’re seeing the results.”

According to Potter, the constitutional premise behind Citizens United is that the government may regulate money that is corrupting and potentially corrupting, but it may not regulate wholly independent speech because, by definition, it cannot corrupt.

“But a new creature emerged: super PACs, which are run by candidates’ former campaign managers and are funded by candidates’ relatives,” Potter says. “The candidates know who the super PAC donors are and thank them. Therefore, we don’t have the independent spending on which the Citizens United court hung its hat.”

Although super PACs must disclose earnings and expenditures, the FEC—composed of three Democrats and three Republicans—has deadlocked on disclosure rules. So super PACs effectively coordinate with campaigns and, some suggest, evade the disclosures and transparency that the Citizens United court expected would prevent corruption by special interests.

Between the deadlocked FEC, a similarly gridlocked Congress (a 2010 campaign reform law that would have required full disclosure of funding intended to influence elections was blocked in the Senate by a Republican filibuster) and a deregulatory push by the courts, the Citizens United decision has been, as Potter puts it, “a recipe for a witches’ brew.”

In rejecting the Citizens United premise, says Potter—a former chairman of the FEC—the Montana court has raised a fundamental question: “Even if the spending is wholly independent, why can’t it be corrupting? The court has to take a nuanced approach.”

State and local legislatures are seeking to do just that. Following a similar move in Los Angeles, the New York City Council passed a resolution in January calling for a constitutional amendment “to provide that corporations are not entitled to the entirety of protections or ‘rights’ of natural persons, specifically so that the expenditure of corporate money … is no longer a form of constitutionally protected speech.”

Potter notes that not one justice on the high court “has ever run for dog catcher,” and not since Justice Sandra Day O’Connor retired in 2006 has a Supreme Court justice had a resumé that included an elective office. “Instead, you have a group of academics and lower court judges with no real-world political experience, and therefore they don’t trust the legislature to regulate. If the court had people who’d gone through the political process, they would be much more inclined to understand the need for campaign finance legislation.”

But John Hardin Young, Potter’s ABA committee co-chair, says Citizens United “stands for the proposition that, unequivocally, there’s no sufficient governmental interest that justifies limits on political speech, including corporate speech. The marketplace of political ideas is part of our American democratic heritage and what Citizens United tries to protect. No amount of frustration with the decision will change the fact that the First Amendment predominates. It’s in the Bill of Rights, particularly for political speech.”

The problem is that political discourse has become “so frazzled and fractured” that the marketplace of ideas becomes dysfunctional in and of itself, Young says. “It’s not Plato’s forum anymore. Instead, it’s shrill messages with unlimited backing.” Though the government may not suppress speech altogether, it can regulate speech through disclaimers and disclosures, and Congress is at fault for failing to fill in the gap with strong disclosure rules, adds Young, who handles election dispute matters at Sandler, Reiff, Young & Lamb in Washington, D.C.

“Congress should work toward a regulatory system that focuses on disclosure and disclaimers to increase transparency of messages in the political marketplace,” he says. “There are no perfect answers. But democracy doesn’t seek perfect answers. It does seek the separation of powers.”

Whether super PACs actually skew voting patterns is unclear, he says. “Now there are a multitude of media outlets and the American people are not as naive as we might come to think. Especially with disclosures and disclaimers, people see political messages for what they are. Citizens United is therefore right in having confidence in the First Amendment.”