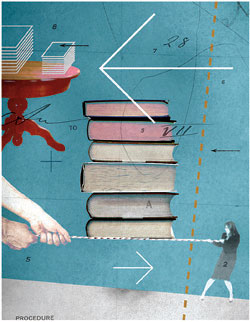 As the ABA House of Delegates prepared to adjourn late in the afternoon on Aug. 6 after a full day of deliberations, members of the Commission on Ethics 20/20 finally retired to their “war room” to pop open a couple of bottles of champagne and savor the fact that their resolutions had breezed through that afternoon with minimal debate and little opposition.

Actually, the commission’s toughest fight came hours earlier, when it played a key role in blocking the adoption of another resolution.

The House voted to postpone indefinitely a resolution (PDF) co-sponsored by the Illinois State Bar Association and the ABA Senior Lawyers Division. The outcome was declared by House Chair Linda A. Klein of Atlanta after an informal head count.

“Affirmation of these core principles and values is important now,” states the report supporting the resolution, “particularly at a time when technological advances and globalization are pressuring the profession to lessen its commitment to the public and to professional independence.”

The resolution had important bearing on the Ethics 20/20 Commission, which has been working since 2009 to consider possible revisions to the ABA Model Rules of Professional Conduct in response to the impact of globalization and technology on law practice in the United States, for two reasons.

First, the House vote to postpone indefinitely the ISBA/SLD resolution (PDF) was an early indication that the commission had the support necessary to gain approval for the resolutions it would present to the House later in the day.

Second, and perhaps more important, the failure to adopt the ISBA/SLD resolution gave the commission what amounted to a vote of confidence to complete its work, which is expected to culminate in February when the commission submits its final recommendations to the House at the 2013 ABA Midyear Meeting in Dallas.

The commission won’t decide what proposals it will bring to the House in Dallas at least until it meets in late October, but one of them could bring some aspect of the nonlawyer ownership issue back to the House.

The commission already has dropped consideration of possible changes to the Model Rules that would allow nonlawyers to have some form of limited ownership interest in U.S. law firms. The Model Rules, which are the direct basis for professional conduct rules in all the states except California, don’t permit nonlawyer ownership.

“Based on the commission’s extensive outreach, research, consultation and the response of the profession, there does not appear to be a sufficient basis for recommending a change to ABA policy on nonlawyer ownership of law firms,” said co-chairs Jamie S. Gorelick and Michael Traynor in a statement issued after the commission’s meeting in April. Gorelick is a partner at Wilmer Cutler Pickering Hale and Dorr in Washington, D.C. Traynor of Berkeley, Calif., is a past president of the American Law Institute.

Nonlawyer ownership of law firms also is prohibited in every U.S. jurisdiction except the District of Columbia, which permits it in a limited form. But nonlawyer ownership is becoming more common in some foreign jurisdictions, notably Australia, Canada and the United Kingdom. American law firms doing business overseas increasingly face questions about how to balance the permissive rules on business structures in other countries and the more restrictive regulations in U.S. jurisdictions.

As a practical matter, for instance, these issues can arise in the context of fees. An initial draft proposal (PDF) distributed by the commission for comment in December 2011 outlines two possible approaches to this issue.

First, the draft proposal would revise the black letter and comment of Model Rule 1.5 to permit two or more law firms to divide the fee from a legal matter even if one of the firms is governed by the rules of a jurisdiction that permits nonlawyers to be partners or to have an ownership interest.

Second, the draft proposal would revise the black letter and comment to Model Rule 5.4 to allow a lawyer to share legal fees with a nonlawyer in the same firm, but only if the nonlawyer performs professional work related to the legal services provided to a client and the form of fee-sharing is permitted in the jurisdiction whose rules would apply to resolving the question.

The commission has emphasized that the draft proposal was released to elicit comment and should not be interpreted as a preview of any final recommendation the commission will submit to the House. “The choice-of-law issue is a hard question,” Gorelick told the ABA Journal at the annual meeting. “I’m not sure we’ll come up with an answer.”

But for staunch opponents of any kind of nonlawyer ownership interest in law firms, even a relatively narrow issue like fees sends up warning flags, and sponsors of the ISBA/SLD resolution made it clear that part of their mission was to run the Ethics 20/20 Commission’s consideration of the issue off the tracks.

Introducing the resolution to the House, Illinois State Bar President John E. Thies questioned why the Ethics 20/20 Commission was opposing it and asked just what the commission was planning to recommend on the fee-splitting issue.

“Members of the profession across the nation are concerned that we’re considering allowing nonlawyer ownership by another name,” said Thies, a shareholder in Webber & Thies in Urbana. He called on the House to send a message that “this association is not going to water down its ethical standards.”

But in opposition to the resolution, commission member Frederic S. Ury said, “We have no hidden agenda.” The resolution is an effort, he said, to cut off further discussion of the fee-splitting issue. “It’s telling the commission, ‘Be quiet, go away, you’re not going to talk about that,’ ” said Ury, a founding member of Ury & Moskow in Fairfield, Conn. “We just ask for an opportunity to finish the work you’ve asked us to do.”

The House now has given the Ethics 20/20 Commission that opportunity, and Gorelick expressed a sense of vindication for the commission’s efforts. “The debate allowed the House to hear what long-term members think about the process we’ve followed,” she said. “The commission has been transparent, open and self-evident. There is no reason to think we have a hidden agenda.”

One of those longtime members, past ABA President H. Thomas Wells Jr., reminded the delegates during the House debate that they will ultimately have the final say. The commission may or may not make a recommendation on choice of law related to fees for the House to consider in February, said Wells, a shareholder at Maynard Cooper & Gale in Birmingham, Ala., “but if it does and if I like it, I’ll vote for it. If I don’t like it, I won’t vote for it.”