Close to Home: Minority Firms Reach Into the Community for Their Clients 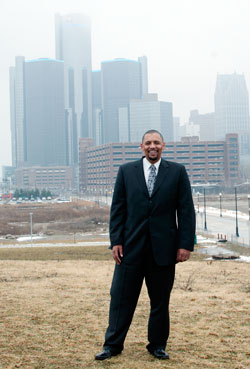 Christopher Quinn II markets to his hometown of Detroit. Photo by James Griffioen.

Last fall, Christopher W. Quinn II offered a free consultation to 10,000 subscribers of the Michigan Chronicle, an African-American newspaper, as a way of advertising his Detroit-based solo practice specializing in business and real estate law, and criminal defense.

Dale Minami of Minami Tamaki in San Francisco sent 250 CDs of the Japanese-American jazz band Hiroshima to clients and former clients as a holiday gift last year. The firm of 15 lawyers also distributed pedestrian-safety fliers in English and Japanese through organizations in Japantown as one way to stay connected to the Asian-Americans who make up 50 percent of his firm’s client base. Minami, who handles personal injury cases, came up with the idea after he had his 10th case representing an injured pedestrian.

And Mercedes M. Sellek, a partner at Abadin Cook in Miami, is part of a women’s email referral network called Ellesquire, set up informally during an event hosted by the National Hispanic Bar Association. In addition to monthly social functions, the 35 women send group messages whenever they seek an expert in a certain practice area.

When it comes to marketing, minority and female attorneys use some combination of old fashioned word-of-mouth, traditional face-to-face networking and the Internet to get the word out about their firms. But those interviewed about their practices emphasized that keeping close ties within their ethnic community and among friends and family members is the most effective way to get business.

“Good, old-fashioned relationship building” is how Cheryl Dancey Balough, a Chicago attorney who serves on the executive committee of the Chicago Bar Association’s Alliance for Women, summarizes the approach. But Balough doesn’t stop there. The former marketing executive who now co-owns an intellectual property and small-business law firm with her husband, Richard Balough, also constantly updates her website and uses search engine optimization, which draws high numbers of visitors to the firm site and leads to business.

“We’re very targeted in our approach,” she says.

Still, the old-fashioned touch is useful whether lawyers are seeking a captive audience from their own ethnic group, which requires some cultural awareness and sensitivity, or reaching out to a majority-culture clientele.

“It’s the concentric-circles theory,” says Minami, who has been practicing for 40 years and was one of the founding lawyers of the Asian American Bar Association of the Greater Bay Area. “We’ve done a really rough anecdotal survey of where we get our cases and it’s really through family, friends, former clients, folks who have referred you cases and people you just know.”

Quinn, who has been practicing for five years, says a personal touch drives his marketing endeavors. He places advertisements for the law offices of Quinn & Associates in restaurants and bars he frequents. He updates his Facebook and Twitter accounts whenever he’s entering a courthouse and he also posts his court wins.

“It’s really important to maximize your inner circle, the people you’re closest to,” Quinn says, “because from there they work as marketing agents for you.”

Sellek, a first-generation Cuban-American, says that her certified minority-owned firm’s lawyers do not use social media websites because their clients prefer that they not. “We’re relying on our community roots,” she says, “because we all grew up here.”