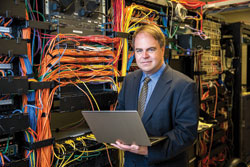 Alan Winchester: “For firms without robust IT departments, [cloud-based e-discovery] grants them the experts to manage the technology operations and security.” Photo by Adam Lerner.

Smaller law firms may be able to save a significant amount of money by ‘renting’ e-discovery applications in the cloud rather than bringing a full-fledged hardware and software solution in-house.

“Only a few years ago, e-discovery in the cloud wasn’t even available,” said Gareth Evans, an Irvine, Calif.-based partner at Gibson, Dunn & Crutcher, adding that these days, even the smallest law firms have a wide variety of e-discovery firms they can source.

Evans spoke as part of a panel at LegalTech New York 2014 in February.

Panelist Alan Winchester, a partner at the New York City firm Harris Beach, agreed: “For firms without robust IT departments, it grants them the experts to manage the technology operations and security.”

While renting e-discovery services a sliver at a time may cause some firms to worry about the security of their data offsite, the panelists advised that with a good contract, those concerns can be minimized.

They also ticked off a number of benefits associated with going to the cloud for e-discovery services, including:

• No need for software updating: Updates to cloud software tend to evolve over time, with users easily absorbing smaller, steadier changes over a much longer time span.

• Best practices are continually updated. E-discovery cloud vendors learn to avoid the pitfalls with software much more quickly, given that they are working with multiple law firms at once. Essentially, the mistakes and misunderstandings that can happen with an e-discovery software package tend to happen at a much faster rate.

• No need for yearlong rollouts. With e-discovery in the cloud, all the hardware and software installation logistics are sidestepped. Instead, firms can focus entirely on training staff and bringing them up to speed.

• The return on investment can be very attractive. Smaller law firms may go months or even years before needing a robust e-discovery package. Instead of spending major dollars—and then watching helplessly as the system grows obsolete—they can go to the cloud for e-discovery on an ad hoc basis and often save handsomely.

Law firms do need to look under all the rocks before committing to the cloud, according to computer and network security expert Kai Axford, a director of strategic services for Overland Park, Kan.-based Fishnet Security.

“As a security guy, I tend to look at the idea of cloud computing from a risk perspective,” Axford says. “I have to tell you, I don’t see a lot of companies agreeing to become liable if your data gets breached on their network.”

Outsourcing your e-discovery also means you’re relying on strangers if there’s an 11th-hour turn in an important case. If you’ve got your cloud IT in-house, you can turn to those people to work crazy hours to slam-dunk the case. But you may not find that same loyalty with an outside firm.

There’s also a danger of becoming trapped with an e-discovery cloud provider. Essentially, once someone has your data, there may not be smiles all around when you inform the firm you’ve decided to go with a different provider or to bring the operation in-house.

Obviously, cloud e-discovery is tempting. But law firms do need to take a hard look at the technology both ways before taking the plunge.

This article originally appeared in the April 2014 issue of the ABA Journal with this headline: “Eye in the Sky: Cloud-based e-discovery can mean big savings.”