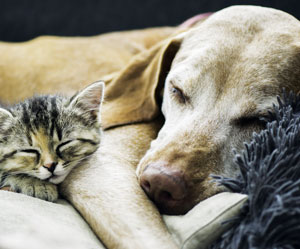 It's raining cats and dogs (and miniature ponies, guinea pigs and other creatures) at college campuses across the country, and housing administrators are grappling with the legal ins and outs of when and how these animals should be accommodated.

At issue are emotional support animals—companion animals that are said to provide therapeutic benefits to people with mental health issues. As diagnoses of anxiety, depression and other mental health problems among college students become more common, so has the prescription of these pets, sometimes called comfort animals, for their calming effect. Whether or not the animals are actually therapeutic is beside the point for schools; they’re wrestling with how to field requests by students who want to bring animals with them to live in campus housing—places not initially designed or intended to accommodate them—as well as possible legal action if they refuse.

These situations are especially complicated because schools are trying to follow a host of rules dictated by state and federal laws that don’t necessarily jibe, including the Americans with Disabilities Act, the Fair Housing Act and Title IX, says Allan Blattner, director of the Department of Housing and Residential Education at the University of North Carolina at Chapel Hill. “This is an emerging issue for us,” says Blattner, who also serves as president of the Association of College and University Housing Officers. “Residence halls are not exactly places considered to be pet friendly. We want to support the students and the safety of the animals, but also other students who may have allergies or fears.”

“For colleges, the legal landscape has become increasingly complicated,” explains Rebecca Wisch, associate editor at Michigan State University School of Law’s Animal Legal & Historical Center, an online animal law database. “There is an intersection of laws with ESAs in housing—the ADA, FHA and Section 504 [of] the Rehabilitation Act. Since colleges come under the Rehabilitation Act, plaintiffs can raise those claims of discrimination for denial of ESAs as well. If the animal functions as a service animal, then the ADA comes into play.”

A handful of recent lawsuits are likely the tip of the iceberg. In 2013, Grand Valley State University in Grand Rapids, Michigan, agreed to pay $40,000 in a settlement but admitted no wrongdoing in response to a lawsuit that accused it of violating a federal housing policy by initially denying a student’s request to live with a guinea pig. That same year, a court rejected a claim by the University of Nebraska at Kearney that its students were “transient visitors” to exclude a resident from the reasonable accommodation requirement of the FHA that would have allowed her to have a therapy dog. And a settlement was reached this January after a 2014 civil rights lawsuit was brought by the U.S. Department of Justice against Kent State University, alleging the school discriminated against students with psychological disabilities. Through a consent decree, Kent State agreed to pay $145,000 as well as adopt a housing policy that would allow emotional support animals.

“Unfortunately, I think more litigation is on the horizon for universities,” Blattner says. “Universities are typically not quick to change their policies, plus there are all the discrepancies between state and federal laws. My colleagues and I want to do the right thing, but there’s not a clear path to do that. Still, each new ruling makes our jobs a little more clear.”

And while dogs and guinea pigs may present some challenges, things get more complicated when requests are for accommodations for more exotic animals. “Colleges get requests to accommodate miniature ponies, ferrets—you name it,” Blattner says. “Whatever animal is designated therapeutic by the student’s mental health practitioner.”

Outrageous and questionable requests are an increasing concern, says Jane Jarrow, an educational disabilities consultant who teaches an online course for educators about ESAs called “Who Let the Dogs In?” She’s created a watch list of practitioners who charge small fees for approval letters easily downloaded from the internet or provided after a quick Skype session.

“Maybe there will come a time when institutions make a conscious choice to become pet friendly,” she says. “That is not the case now—and people who scam the system to get something now that might be appropriate later should be held accountable in the same way that people who engage in clearly illegal or inappropriate actions should be held accountable.”

Blattner says he’s surprised universities haven’t yet heard from animal rights groups. “We have to balance the comfort of our students with the well-being of these animals. It’s not an easy thing to do.”

This article originally appeared in the July 2016 issue of the ABA Journal with this headline: “Who Let the Dogs, Cats and Ponies In? Colleges see an uptick in requests for emotional support animals on campus.”