To Colorado, marijuana is a business—to the federal government, it’s a criminal conspiracy 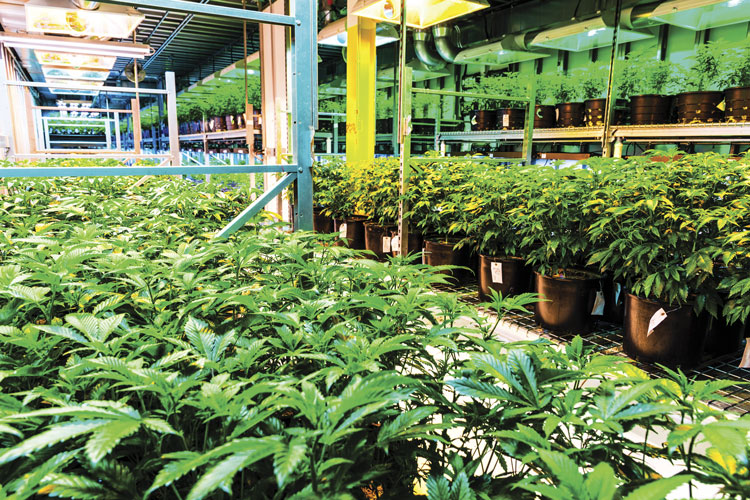 Phillis and Michael Reilly don’t like marijuana. Unfortunately for them, they live in Colorado.

The Reillys own 105 acres of mostly undeveloped land in Pueblo County, and they go there on weekends to ride horses with their children. In 2014, a group of marijuana entrepreneurs bought more than 40 acres of adjacent land, where they built a farm that serves medical and recreational marijuana markets in Colorado.

That upset the Reillys, who are members of a small, obscure antidrug nonprofit called the Safe Streets Alliance. They say the farm hurts the value of their land by producing a very strong marijuana smell and, because of the large quantity of valuable drugs, potentially attracting thieves.

Normally, that kind of complaint would create, at most, a nuisance case in state court. But the Reillys, with the help of the Safe Streets Alliance, took it further by making it a federal case. Marijuana remains illegal under the federal Controlled Substances Act, and almost every violation of the CSA is an automatic violation of the Racketeer Influenced and Corrupt Organizations Act, which is intended to fight organized crime.

So the Reillys and the Safe Streets Alliance sued the farm—and every business or government agency with any relationship to it—under RICO and won an early victory. In June, the 10th U.S. Circuit Court of Appeals at Denver said the property value complaints were sufficient to survive a motion to dismiss.

And that, observers say, could disrupt the young marijuana industry—in Colorado and the other 31 U.S. jurisdictions that have legalized medical or recreational marijuana. A Denver district court will decide whether the RICO claims have merit. But just having to defend them could drive people out of the industry.

Sam Kamin, a professor at the University of Denver Sturm College of Law, thinks that’s the real intent. He says this kind of lawsuit is “asymmetric warfare.”

“The [lawsuits] may or may not succeed, but they have the opportunity to inflict great costs along the way,” says Kamin, who studies marijuana law.

That’s not just speculation. A different RICO suit the alliance filed in 2015 ended after the targeted marijuana business dropped its plans to set up shop in the disputed location and other defendants settled. And a case in Oregon—filed six days after the 10th Circuit’s June ruling—names 44 defendants, including some who have only tenuous connections to the farm.

Under federal law, the decriminalized marijuana industry is in a slightly precarious position. Congress has prevented the Department of Justice from interfering with state-legal medical marijuana, but it left the DOJ free to enforce federal law against state-legal recreational marijuana businesses.

Although RICO was written to fight organized crime, it’s not unusual to see it applied elsewhere. Retired law professor G. Robert Blakey helped draft the statute and several of its state equivalents in the 1970s. He says the U.S. Supreme Court has rejected attempts to narrow RICO’s reach at least twice.

“What you have to read is the statute,” says Blakey, chair emeritus at the University of Notre Dame Law School. “It all applies to you, if you are a person and you do whatever the statute prohibits.”

So the 10th Circuit wasn’t breaking new ground when it let the Reillys’ claims go forward. (The Safe Streets Alliance did not appeal.) For standing reasons, the court rejected a pre-emption challenge to marijuana legalization laws in Colorado, as well as some RICO claims it said were based on personal injuries not permitted under the statute.

But RICO permits recovery for damage to property, and the 10th Circuit ruled that the Reillys had adequately pleaded property damage. The couple had argued that a large quantity of marijuana next door could attract theft. The court found it plausible that a marijuana business openly committing federal crimes next door reduces the value of the Reillys’ land, though it didn’t specify how.

It also agreed that the strong marijuana smell from the farm—which the court described as “foul odors,” “noxious emissions” and a “stench”—creates a nuisance that could plausibly discourage potential buyers.

That claim has been disputed by fans of marijuana. On the blog of the National Organization for the Reform of Marijuana Laws, many commenters said they find the smell pleasant; and one said: “I am perplexed that anyone would object to the odor of cannabis plants.”

This article appeared in the November 2017 issue of the ABA Journal with the headline “Noxious Neighbors? To Colorado, marijuana is a business—to the federal government, it’s a criminal conspiracy."