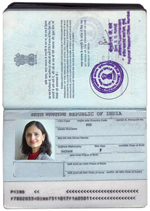 So much for the Honeymoon. Rati Sud had barely stepped off the plane after a 17-hour flight from India when her new husband allegedly punched her and pushed her off the bed for refusing his demands for sex.

It was all downhill from there.

Over the next several months, she later testified, Sud’s husband deprived her of food and sleep. He made her look him in the eyes when she spoke and account for her whereabouts every half hour they were apart. He belittled and degraded her in public. She also never knew when he would snap and slap her, punch her or slam her head into a window.

Sud was trapped—literally and figuratively. Hers was an arranged marriage. She had immigrated to the United States after her marriage in 2005 on an H4 visa. The visa made her ineligible to work, unable to get a Social Securi­ty number and completely dependent on her abusive husband.

Sud thought she had little choice but to endure the domestic violence if she wanted to stay in the United States. But she learned that she was eligible for a little-known visa available to otherwise undocumented immigrant crime victims called a U visa. The visa blocks the deportation of people like Sud if they cooperate with law enforcement.

But the wheels of justice turn very slowly in the United States, Sud learned. Although the law creating the visa was passed in 2000, the implementing regulations were not published until 2007, and applications were piling up, further delaying the process. According to the U.S. Citizenship and Immigra­tion Services, some 14,000 U visa applications were pending before it as of last December. A spokeswoman for the agency attributed the delay to the complicated nature of the process. “A lot of different issues had to be resolved,” she said.

A triage system was implemented to process the most urgent cases first, and staff was increased to handle applications in a more timely manner. Now that those issues have been addressed, the government is moving to help out Sud and others like her. Sud, who divorced her husband in 2007, received her U visa in May after a three-year wait.

As of Oct. 1, the start of the new fiscal year, more than 4,500 U visas had been issued. About 6,600 others are pending, with requests for supplemental information from applicants. Another 6,400 applications are still being processed.

Sud, now living with family in Maryland, has a job and says she is living a healthy, happy life. “Every cloud has a silver lining,” she says. “Mine had a very big one.”