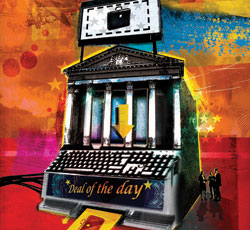 You’ve seen them online at Groupon or LivingSocial: A business charges a small fee for discounted services or products—such as restaurants, movie tickets or spa treatments—as a lure to attract customers. Such creative deal-of-the-day or group-coupon marketing programs have been all the rage.

But more lawyers are also taking advantage of these deal-of-the-day methods. As a result, several states have questioned the ethics pitfalls of using such services.

The American Bar Association’s Standing Committee on Ethics and Professional Responsibility has weighed in on the issue with an extensive opinion, ABA Formal Opinion 465 (PDF), titled “Lawyers’ Use of Deal-of-the-Day Marketing Programs.”

“Coupon deals and prepaid deals are growing,” says ethics expert Peter Joy, who teaches at Washington University School of Law in St. Louis. “Solo practitioners and small law firms are turning to these types of arrangements to generate new business.”

“Many people with moderate incomes do not seek the legal assistance they need in part because they hear about the high costs of lawyers and are afraid even to check on the cost,” Joy adds. “This type of advertising is one way for lawyers to communicate affordable legal services. In addition, the legal market has become increasingly competitive, and lawyers are looking to every form of communication—including social media—to advertise and generate new business.”

The committee was prompted to address these issues because the different state bar ethics opinions “did not seem to agree” with each other, says Lisa E. Chang, an Atlanta-based attorney and former member of the ethics committee who worked on the opinion. “After digging in, the committee realized the opinions about lawyer deals on social media perhaps were not talking about the same thing.” The ABA’s opinion cites ethics opinions from Alabama, Arizona, Indiana, Maryland, New York, North Carolina, Pennsylvania and South Carolina.

The opinion says lawyers may use such programs, but that “a lawyer must exercise great care to ensure that both the offer and any resulting representation comply with all obligations under the Model Rules, including avoiding false or misleading statements and conflicts of interest, providing competent and diligent representation, and appropriately handling all money received.”

The opinion addresses the fundamental duty of competency by stressing that lawyers should offer these deals only in areas of law in which they are well-versed. “A lawyer who is offering deals should limit the type of services and practice area(s) covered in the offer to those in which the lawyer is competent so that individuals can make in-formed decisions,” the opinion reads. “A lawyer offering deals should also specify any limitations on the types of matters the lawyer handles.”

Ethics expert Stephanie Kimbro, a Raleigh, N.C.-based attorney, stresses that the biggest ethics pitfall might be ensuring the duty of competency. “Because these daily deal sites were not designed specifically for use by lawyers and don’t have to follow our lawyer advertising rules, I think it will be important for lawyers to keep up to date on the changes that the service implements in terms of their user agreement and how the lawyer’s profile and coupons or other data are used on the site and portrayed to the consumer,” she explains. “Just because the tech looks safe and in compliance one day doesn’t mean it won’t be updated in a month or two.”

The ABA also warns lawyers to consider the number of deals sold this way. “Businesses have been harmed by overselling deals and then struggling to meet the ensuing demand,” the opinion states. “For a lawyer, setting too high a cap on the number of deals sold could lead to a violation of the Model Rules if the result is excessive work that the lawyer cannot handle promptly, competently and diligently.”

Another section of the opinion addresses false or misleading advertising, which Model Rule 7.1 clearly prohibits. “Lawyers who choose to use deal-of-the-day marketing programs must supervise the statements made to ensure their accuracy and ensure that the substantive content does not include misleading or incomplete offers that run afoul of the restrictions contained in the Model Rules.” The ads also should clearly define the scope of services offered and explain to clients whether court costs and expenses are included in the deal.

“If a lawyer does not define the scope of service offered in one of these deals, there is the potential for false or misleading advertising,” Chang says. Joy agrees: “The biggest pitfall with these types of arrangements is communicating clearly with potential clients about what they can expect and for the lawyer to be absolutely truthful. For example, a lawyer cannot say that he or she is discounting a normal rate of $200 an hour to $150 an hour unless the lawyer normally does charge $200 an hour.”

Lawyers more easily comply with ethics rules by using coupon deals rather than prepaid deals, according to the opinion. “If a prepaid deal promises some legal services, such as a will or estate plan, for a certain sum, the lawyer has to deliver at the agreed-upon price,” says Joy.

The problem arises when the client’s needs may exceed what the lawyer anticipated. The temptation will be to charge the client more or deliver less than what the client needs.

Chang adds that “a primary value of the opinion is that it provides a road map for attorneys to identify the issues … to consider when they utilize coupon or prepaid deals.”

“This is a developing area, and the ABA needs to be out in front of these issues,” Joy says. “State and local bar associations that have not addressed the issue of coupons and prepaid deals will find this opinion very useful.”

This article originally appeared in the January 2014 issue of the ABA Journal with this headline: “The Real ‘Deal of the Day’: Committee calls for caution as more lawyers use group-coupon or prepaid marketing.”