How to write powerful closers 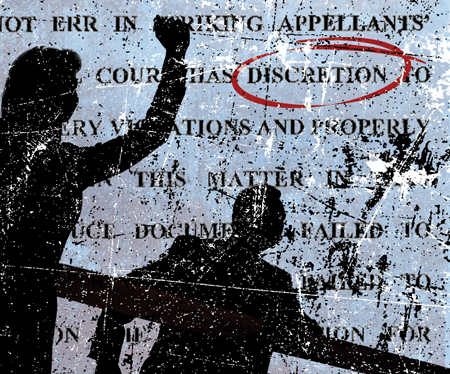 The bane of so-called persuasive legal writing is that openers are typically slow and muddled (as we’ve seen over the past two columns), and closers are rote and perfunctory.

One way of describing the problem is that most briefs and motions consist almost entirely of undifferentiated “middle”—lacking any proper opener or closer. If the opener says anything at all, it’s likely to be “for all the following reasons.” And the closer is likely to say “for all the foregoing reasons.” At many law schools, in fact, it’s dogmatically taught in moot-court programs that a conclusion must contain nothing but a one-sentence prayer: “For the reasons hereinabove stated, Jones requests that the judgment be affirmed.”

This benighted doctrine contradicts everything that professional writers and rhetoricians have ever said—from the time of Aristotle to the present day. Only with an extremely short brief, say of two pages, might a cursory closer be justified.

We should remember that there’s no such thing as “good legal writing” that’s different from good writing. They’re very much the same. When we think of ourselves as doing something essentially different from what other (non-legal) writers are doing, we start justifying all sorts of anomalous, ineffective habits. The fact is that we legal writers have a lot to learn from professional nonfiction writers—people who write in hopes that others will pay money for the privilege of reading what they’ve written. If we think of ourselves as having a captive audience of judges and law clerks who are paid readers, who must read what we write to do their jobs, then we can excuse all sorts of mediocre literary conventions. In fact, many lawyers do just that.

TEDIUM IS THE ENEMY

Let’s focus here on how to end a good piece of persuasive writing. It’s a tough mission: You’re trying (as at all points) to keep your reader’s interest high, to capsulize your points freshly, to lead the reader to conclude that what you’re asking for is best, and to spur your reader to do what you’re asking.

Repeating sentences that you’ve already written is sure to bore; going on too long will diffuse your points; sounding unreasonable will make the reader unlikely to side with you; and tedium induces only sleep. These things are all your enemies.

Burdening your reader is also unwise. You do that by saying, essentially: “Go back and reread the whole brief again. Or, if you skipped straight to this conclusion, go back and do your job! I’m not giving you an easy way out.” So the generic conclusion is a poor strategy as well.

What I recommend is a pithy summary that contains at least two catchy (but not catchpenny) words that you haven’t used anywhere else in your brief or motion. Keep it understated. But know that this is the place, if there is one, to begin injecting a little emotion. (Avoid that on page one, which should be coolly logical.) This is also the place to make a policy argument that might not have fit well in the body of the brief.

The point is to find some way of making your points a little differently at the end. Rack your brain to think of the approach. I like to write the conclusion in a separate sitting, without looking at the introduction or the body of what I’ve already written, but trying to find a slightly different angle. Just as a photographer finds that moving a step or two one way or the other changes the view significantly, you can try doing that with some original thinking.

THE POWER OF REWRITING

Having taught this method recently at a law firm in Los Angeles, I gave a homework assignment to the lawyers: They had two hours to find a humdrum closer and to write instead a powerful one that might rivet the judge’s mind in a short paragraph or two. Participants were to introduce at least two new words into the conclusion to be sure that their final words would resonate.

Here’s how Jason Kim rewrote that closer: “The safety of Ms. Johnson’s infant daughter is at risk because the trial court awarded custody to a proven domestic abuser. The science establishes that her daughter may suffer irreversible emotional and physical harm if Mr. Findlay is allowed continued custody. This court has the sound discretion to expedite appeals involving a child’s safety. We urge the court to use that discretion and to protect Ms. Johnson’s daughter from the very real threat of future harm.”

In explaining his revision, Jason said that the biggest challenge was finding two words he hadn’t used elsewhere in the brief. He settled on the words science and irreversible—the first because it conveyed the idea that the threat to the child’s safety wasn’t up for discussion (the authorities had been marshaled and cited), the second because the studies Jason cited in the brief showed the harm to be long-term and life-threatening.

Another example also began as a mere pro forma statement, appearing on page 19 of an emergency motion for conditional release: “Mr. Lopez respectfully requests that this court order his immediate release on bail pending the resolution of his habeas petition.”

Sam Eisenberg rewrote the closer so that it wouldn’t be just boilerplate. He wanted to land some punches without making the tone inflammatory. Here’s what he wrote—and, by the way, this didn’t resemble any passage anywhere else in the motion: “In the 12 days since Lopez’s arrest, the government has failed to provide this court with a fact-based, constitutional reason for either his arrest or his continued detention. Lopez has presented evidence rebutting each rationale the government has offered. The record shows that Lopez’s arrest violated the Fourth Amendment. The government’s threat to terminate his employment authorization based on mere innuendo also violates due process. The government’s arguments here, which belie its repeated public statements that the benefits and protections of the DACA program remain in place, have engendered fear among the over 860,000 government-vetted DACA recipients who are in the same position as Lopez. This court has the power to conditionally release Lopez pending the resolution of his habeas petition. It should do so to protect his constitutional rights and his personal safety.”

Sam told me that it was challenging to summarize the many arguments and standards at issue in that case while still keeping the closer short. Initially, he thought it would be impossible. (That’s a normal reaction to any rhetorical challenge: At first, the material seems intractable; then you have a breakthrough.) In the end, just the short time he spent focusing on the conclusion helped him determine what points had and hadn’t been made in the brief, decide which points were the strongest, and ensure that he’d told a complete story.

Although the two examples I’ve given are pretty dramatic, the principle holds as well with drier matters such as commercial litigation. Remember: At first, it’ll seem unattainable, and then (if you persist) you’ll find an approach that works. Naturally, you’ll want to test it on others before filing. Don’t be afraid of a colleague’s criticism. It’ll help you refine your work.

Coming full circle with this particular column is no mean feat. Let me try by prompting you to act. Try this experiment. Pick up a major newsmagazine and select three meaty articles—at random. Scrutinize just the openers and closers. I’ll bet you’ll find that, more often than not, a unifying thread from the opener gets woven into the closer in a way that’s intellectually satisfying. There’s a real lesson there.

Bryan A. Garner (@BryanAGarner), the president of LawProse Inc. of Dallas, is the author, most recently,

of The Law of Judicial Precedent (with 12 appellate judge co-authors) and Garner’s Modern English Usage (available as a phone and tablet app also). He has been editor-in-chief of Black’s Law Dictionary for the past four unabridged editions.