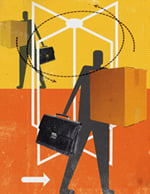 Joining a law firm no longer implies the long-term commitment it once did.

More than a third of survey respondents just three years out of law school said they had changed jobs at least once, according to a 2004 report titled After the JD: First Results of a National Study of Legal Careers by the American Bar Foundation and the Foundation for Law Career Research and Education at the National Association for Law Placement. By their seventh year in practice, 53 percent of the respondents had changed practice settings. And those numbers were reported before the current recession made jobs at law firms even more transient.

All this moving around by lawyers raises some tricky ethics issues, especially regarding conflicts of interest. The primary difficulty is reconciling the general ethics prohibition against disclosing client information with the practical reality that one of the best ways to avoid trouble when a lawyer moves to a new firm is to conduct a conflicts check.

A conflicts check typically involves examining computerized lists of clients and cases to determine whether the moving lawyer has ever represented parties with interests adverse to those of the new firm’s clients, and normally the disclosure of that information occurs before the lawyer is formally hired by the new firm.

But doesn’t a conflicts check itself violate the ethics rules that are intended to protect the confidentiality of client information? After all, Rule 1.6(a) of the ABA Model Rules of Professional Conduct states that “a lawyer shall not reveal information relating to the representation of a client unless the client gives informed consent, the disclosure is impliedly authorized in order to carry out the representation or the disclosure is permitted by Paragraph (b),” which sets forth a very limited list of exceptions to the prohibition against disclosure. Moreover, Comment 3 to Model Rule 1.6 states that the confidentiality rule “applies not only to matters communicated in confidence by the client but also to all information relating to the representation, whatever its source.” (The Model Rules are the basis for lawyer ethics codes in every state except California.)

An opinion issued recently by the ABA Standing Committee on Ethics and Professional Responsibility acknowledges the dilemma. “Some commentators have expressed concern that the Model Rules do not specifically permit disclosure of the information required for conflicts analysis,” notes the committee in Formal Opinion 09-455 (Oct. 8) (PDF).

Nevertheless, the ethics committee concludes that lawyers should be permitted to disclose the basic information needed for conflicts analysis. Citing a statement in Paragraph 14 of the Scope provision of the Model Rules—that they are meant to be “rules of reason” —the committee maintains that interpreting Rule 1.6 to prohibit any disclosure of such information would actually prejudice clients by failing to avoid conflicts of interest while precluding lawyers moving between firms from complying with the conflicts rules.

“Disclosure of conflicts information otherwise protected by Rule 1.6 should be considered permissible as necessary to comply with the rules,” subject to certain limitations, states the committee in its opinion. Among the restrictions that should be imposed as part of the conflicts check process are limiting disclosure to what is reasonably necessary, carefully managing the timing of disclosure, and limiting disclosure only to those who need to know. In addition, disclosing conflicts information must not violate the attorney-client privilege or otherwise prejudice a client or former client.

The committee also raises the possibility of using an independent or intermediary lawyer to receive and analyze conflicts information in confidence. The intermediary then may advise both the moving lawyer and the new firm, without disclosing any information to the other, regarding any conflicts of interest that may have been detected.

The legal job market may resemble a revolving door these days, but careful attention to potential conflicts issues will help keep it from jamming on lawyers seeking to make a move.