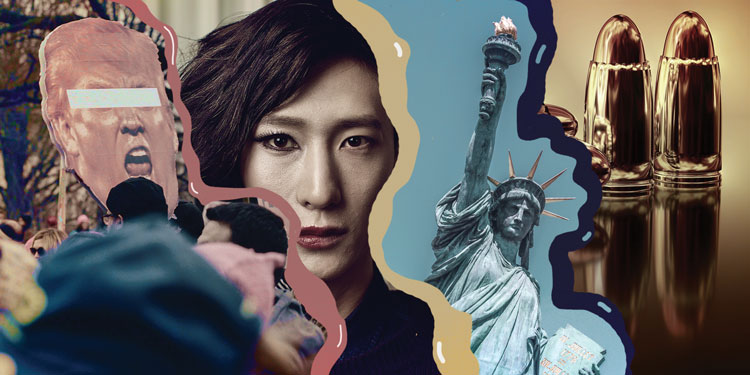 The U.S. Supreme Court will tackle some pretty big issues in its next term, including cases on LGBT rights, immigration and its first major case on gun rights in nearly a decade. And that’s with only about half of its docket filled for the term that begins Oct. 7.

“The court has on its agenda a set of really high-profile cases,” says Adam Winkler, a law professor at the University of California at Los Angeles. “The reason is that the court stayed out of the political thicket last term.”

Most legal observers agree that the justices worked hard to block or push down the road several contentious cases from last term’s docket, except for two big issues that it pretty much had to decide: political gerrymandering and the citizenship question on the U.S. census.

“I think they are only able to keep these big blockbuster cases off the docket for a short period of time,” says Leah Litman, an assistant professor at the University of Michigan Law School and a co-host of the podcast Strict Scrutiny.

One set of potential blockbusters will be heard Oct. 8. Two consolidated cases ask whether workplace discrimination based on sexual orientation is covered by Title VII of the Civil Rights Act of 1964, specifically its prohibition against bias “because of … sex.” The ABA filed an amicus brief supporting the employees. The third case, which will be argued separately, asks whether Title VII bars discrimination against transgender workers because of their transgender status or because of sex stereotyping.

“There is a lot at stake in these cases for LGBT people,” says James D. Esseks, the director of the American Civil Liberties Union’s Lesbian Gay Bisexual Transgender & HIV Project and co-counsel in two of the cases. “The reality is that LGBT people have been relying on protections based on sex discrimination statutes for years. The question before the court is, Are [the justices] going to take those protections away?”

“What’s at stake here is whether the courts have the ability to rewrite a federal law to align with their own personal policy preferences instead of letting Congress do this by amendment,” says Bursch, the vice president of appellate advocacy and senior counsel to the ADF.

In 2013, Stephens presented co-workers with a letter outlining her struggles with her gender dysphoria and her intention to have gender-reassignment surgery, to be preceded by presenting herself consistent with her gender identity as a woman. The funeral home owner, Thomas Rost, fired Stephens, in his words from court papers, because “he was no longer going to represent himself as a man.”

The Cincinnati-based 6th U.S. Circuit Court of Appeals held that the funeral home violated Title VII by firing Stephens because she did not conform to Rost’s sex stereotypes. The Supreme Court granted review to decide whether Title VII prohibits discrimination against transgender people based on their status as transgender or based on sex stereotyping under its 1989 landmark decision in Price Waterhouse v. Hopkins.

Also on Oct. 8, the justices will hear arguments in two related cases, Bostock v. Clayton County, Georgia and Altitude Express Inc. v. Zarda. The first involves Gerald Bostock, a county child-welfare coordinator who is gay and claims he was fired after his superiors learned he participated in a gay softball league. The second involves Donald Zarda, who was gay and worked as a skydiving instructor and who claimed he was fired after sharing his sexual orientation with a female client to put her at ease. Zarda has since died, but his case is being carried on by his estate.

Two federal appeals courts split on those cases regarding whether sexual orientation bias is a form of sex discrimination covered by Title VII. The New York City-based 2nd Circuit ruled that it was in the Zarda case, while the Atlanta-based 11th Circuit ruled in the Bostock case that it was bound by circuit precedent rejecting such a claim.

These will be the first LGBT rights cases to come before the court since the 2018 retirement of Justice Anthony M. Kennedy, the author of all the Supreme Court’s decisions expanding gay rights.

“The possible ramifications of these cases are extensive,” Esseks says.

The future of DACA

The court will take up another set of controversial cases, this time involving the efforts of President Donald J. Trump’s administration to terminate the Deferred Action for Childhood Arrivals program.

That program, begun under President Barack Obama in 2012, provides relief from deportation to as many as 800,000 undocumented young people who came to the United States before age 16.

In 2017, the Trump administration issued a memorandum rescinding the program, reasoning that it was likely unlawful under a key federal immigration statute. The decision was quickly challenged in multiple lawsuits by states, universities, immigration advocates and civil rights groups.

Among other court rulings, the San Francisco-based 9th Circuit blocked the termination of DACA on the grounds that it was arbitrary and capricious under the Administrative Procedure Act.

The Supreme Court, after turning away the administration’s request to take up appeals of the issue last term, granted review in late June and set three cases for consolidated arguments Nov. 12. Those cases are Department of Homeland Security v. Regents of the University of California, Trump v. NAACP and McAleenan v. Vidal.

“The Supreme Court is taking up a case that could radically change hundreds of thousands of people’s lives,” says Litman, who is co-counsel to several DACA recipients challenging the Trump administration’s effort. “They could have the ability to work legally in the United States just yanked away from them.”

Christopher J. Hajec, the litigation director of the Immigration Reform Law Institute, which filed an amicus brief defending the Trump administration’s effort, says the longtime stalemate in Congress over federal immigration policy means a decision by the court upholding the cancellation of the program would be “a big deal, because it would end DACA without much possibility of a legislative replacement.”

Bracing for a gunfight

In January, the high court granted review of a major gun rights case: New York State Rifle & Pistol Association Inc. v. City of New York, about whether the city’s ban on transporting a licensed, locked and unloaded handgun to a home or shooting range outside city limits is consistent with the Second Amendment.

However, whether the justices will end up hearing arguments and deciding the new case was put in doubt over the summer.

In July, New York City filed papers with the high court suggesting the case was moot because the city had amended the challenged regulation to allow gun owners to transport their firearms outside the city, and New York state had amended a relevant state law to ensure that licensed gun owners may transport their weapons. “There is no longer a case or controversy because the changes in state and municipal law give [challengers] all they seek,” the New York City brief argues. The challengers filed court papers arguing the case is not moot and should still be heard by the justices. At press deadline, the court had not responded to the city’s request.

“It does seem like the court is ready to jump back into Second Amendment controversies,” says Winkler, who believes the difference may be the retirement of Kennedy, who was considered by some a wavering supporter of gun rights despite his majority votes in two landmark Second Amendment cases. “I think the court took this case to make a strong statement about the Second Amendment.”

There is a range of other potentially significant cases on the court’s docket. The justices will consider whether state constitutional prohibitions on aid to religious groups clash with the federal free exercise of religion rights of potential religious school beneficiaries of a state tax credit for private school tuition. The court will weigh two provocative criminal issues involving the states’ abilities to limit the insanity defense and allow nonunanimous jury verdicts. And as the commonwealth of Puerto Rico is roiled by political and social strife, the court will consider the constitutionality of appointments to a federal financial oversight board for the island.

At a July forum in Washington, D.C., Neil S. Siegel, a Duke University law professor and former law clerk to Justice Ruth Bader Ginsburg, asked Ginsburg about the perception that the high court had delayed some big cases and pushed some to the new term.

Ginsburg replied that the court likes to let issues percolate in lower courts when possible, an explanation that applies to some but not all of the big issues the justices dragged their feet on last term.

“I can say just one thing about next term,” Ginsburg said. “It is safe to predict that we will have a fair share of closely watched cases.”

This article ran in the September-October 2019 issue of the ABA Journal with the headline “Contentious Cases: The court will take on big issues that have been percolating for a while.”