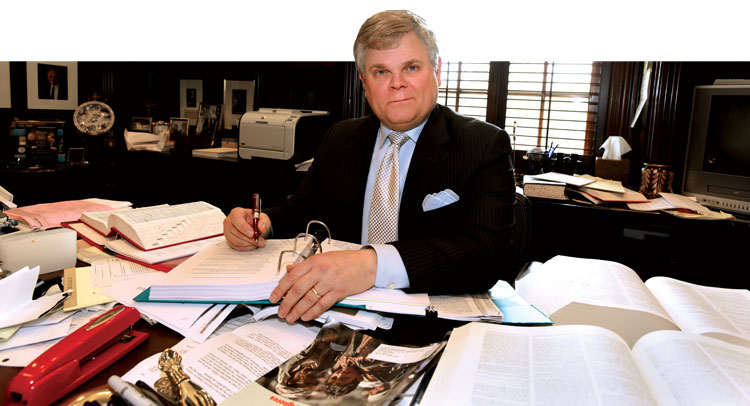 Bryan Garner: “What I’d like to explore in this column is the curiosity of ‘busts’–the prevalence of contractual provisions, sometimes perpetuated in deal after deal, that make no literal sense at all.” Photo by Winn Fuqua Photography

Transactional drafting is a fascinating field of study—and of practice. There are rigors on the one hand and lunacies on the other. The rigors involve accurately achieving the contracting parties’ desired result, preferably in a form they can comprehend. The lunacies involve using pastiche forms riddled with wildly inconsistent ways of expressing simple duties, absurd archaisms whose purpose few lawyers can explain, and repellent typographic practices that still today make many if not most contracts grotesque to read.

What I’d like to explore in this column is the curiosity of “busts”—the prevalence of contractual provisions, sometimes perpetuated in deal after deal, that make no literal sense at all. That they exist at all is something of a marvel. After all, you’d think that transactional lawyers would adopt a protocol of reading and rereading each contract that goes out the door. Given that critical thinking and close reading are prized habits for lawyers, contradictory or outright nonsensical provisions should be exceedingly rare. Alas, they’re not.

Most experienced lawyers can recall anecdotes of contractual monstrosities. One involves a malpractice claim against a law firm: A mortgage had somehow been prepared in the early 1980s with a crucial line dropped. The sentence made no sense. The firm had prepared dozens if not hundreds of mortgages with the same language missing, resulting in an incomplete sentence that made little sense—and the sense it did seem to make resulted in a disposition that no sane drafter could have wanted. It seems that a typist had simply skipped a line and continued typing. Nobody caught the error—until a problem erupted in the early 2000s.

By that time, the faulty contract had long since become entrenched as the “firm form.” A secretarial error from a generation before had become permanently ensconced in the form.

That’s one of the pratfalls that forms, or precedents, encourage: a blind reliance on what’s “worked” before. Forms often lull drafters into a false sense of security. If it worked last time, it’s surely reliable. “Don’t touch a word of it,” I’ve heard drafters say. “It’s time-tested, and most of the provisions have probably been litigated.”

This, too, is lunacy. As David Mellinkoff demonstrated in his classic book The Language of the Law (1963), litigated forms typically have glaring problems in them. That’s usually why they fomented the litigation in the first place. Yet for most of the 20th century, American legal publishers collected “litigated forms” as if they were prized: The ambiguities within them had been adjudicated and settled. Yet if, say, the Arizona Supreme Court decides a contractual ambiguity one way, the California Supreme Court may decide it differently, and the New York Court of Appeals even differently from the others. All because nobody simply redrafted the ambiguity to fix the problem. After all, if a redrafted form hasn’t been litigated, how could it be recommended over wording that had?

I once attended a lecture by an expert on mechanic’s liens. He cited a recent state supreme court’s decision in which, in a critical provision, the court held that shall meant may. (Such holdings are common, given the pervasive sloppiness with which legal drafters use the word shall.) After noting the decision, he emphatically recommended that all drafters in the state would be well advised to use shall in this provision because they know what it means there: It means may. When I asked why drafters shouldn’t simply use may, he said he had no idea what that might be held to mean. After all, it hadn’t been adjudicated.

This mindset leads to all kinds of perversions in drafting.

But then there are simple lapses in attentive reading. Lawyers often send me “busts” they encounter. Just last week I received an e-mail quoting this provision from a loan document: “On January 1 of each year during the term of the Loan, Borrower shall furnish and supply Lender each of the Lender’s monthly bank statements for the preceding twelve (12) months.”

Of course, the second instance of Lender should be Borrower.

Typos of that kind—actually swapping the parties—are most common in contracts that contain correlative designations ending in -ee and -or: employer/employee, licensor/licensee, mortgagor/mortgagee, etc. Using both in a given legal instrument should be forbidden. It begs for errors of this kind. Yet many intellectual property lawyers prepare licensing agreements with licensor/licensee.

The problems are threefold: (1) whenever such a document is retyped, clerical errors are likely to occur; (2) the sameness of the party designations leads to cognitive difficulties for all readers—including the drafters themselves—because the only visual difference is the two-character suffix at the end; and (3) clients tend to resent such documents not just for their unreadability, but also for their appearing to be forms that the lawyer took little care in adapting.

“I’m paying you this fee for a form you took off your server?” the client is likely to think if not say. A simple search-and-replace maneuver makes the entire document look tailor-made. When you can, you ought to use the parties’ actual names. Bad: Vendor/Vendee. Better: Seller/Buyer. Best: Williams/Johnson. And if you use the parties’ names, you yourself will read the document with greater comprehension and attentiveness. Try it.