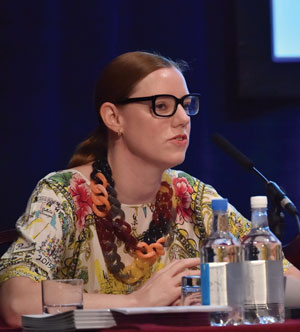 Ursula Wynhoven spoke of how the rule of law encourages investment in a country’s future and fosters accountability, equality and human rights. Photograph by Professional Images.

That global corporations can—and should—play an important role in promoting the rule of law around the world was the consensus of a panel of attorneys, barristers and academics gathered for a seminar at the ABA London Sessions.

The “Global Corporations and the Rule of Law” program was sponsored by the ABA Section of International Law.

The panel, moderated by Isabella Bunn of the University of Oxford, consisted of Catherine Young, executive director of the Oxford Analytica Foundation in Oxford; Ursula Wynhoven, general counsel and chief of governance and social sustainability at the United Nations Global Compact; Ian McDougall, executive vice president and general counsel of LexisNexis Legal & Professional Global Leadership; Kirsty Brimelow, a barrister at Doughty Street Chambers; David Rivkin, a partner at Debevoise & Plimpton based in New York City and London; and professor Robert McCorquodale, director of the British Institute of International and Comparative Law.

“Why should businesses promote the rule of law?” asked McDougall, whose division of LexisNexis partnered with the Atlantic Council to create the Global Rule of Law Business Principles in 2013. “It’s the right thing to do. Moreover, there’s a direct connection to economics. The stats are amazingly clear—there’s a strong correlation between countries that have a strong rule of law and GDP growth.”

The panelists spoke at length about the U.N. Global Compact’s Business for the Rule of Law Framework, which is scheduled to be unveiled this summer, according to Wynhoven.

“Ian [McDougall] had the initial idea to bring this to the U.N., and it became a key priority,” Wynhoven said. “When the rule of law is present and strong, individuals and organizations can invest in the future and adopt a long-term approach while promoting accountability, certainty, equality and human rights.”

Human rights were a major theme throughout the discussion. As several audience members pointed out, “rule of law” can mean anything and open the door to all kinds of abuses and totalitarian behavior. As such, the panelists were careful to emphasize that they believed in using the rule of law to promote human rights in accordance with established international conventions.

“There are companies that have fantastic environmental, anti-corruption and anti-human trafficking policies,” McDougall said. “Without rule of law, they’re just pieces of paper.”

Rivkin shared an anecdote of an energy CEO who calculated that noncompliance or delays as a result of human rights violations and externalities related to them (like labor strikes) cost him $1 billion a year.

“Through our central role in drafting and negotiating contracts, lawyers can play a critical role in helping companies increase their leverage in encouraging other parties to adopt or preserve certain human rights,” he said.

Brimelow, meanwhile, acknowledged that a company’s reputation can make up a substantial percentage of its total value.

“Recent research suggests that 38 percent of the stock market value of the FTSE 100 [the British equivalent to the Dow Jones] companies, which is nearly 911 billion pounds, can be attributed to the reputation of that business,” Brimelow said. “Those are huge figures, and corporations are waking up to the damaging effect in cash terms of what happens when someone on Twitter posts a photo of a mess made by an oil extractor or something like that.”

Of course, human rights go beyond dollars and cents. After McCorquodale pointed out the indelible link between the Magna Carta and business interests—he said the barons who forced King John to seal it were businessmen looking for stability and protection to continue making their living—he cautioned against equating human rights with corporate social responsibility.

This article originally appeared in the August 2015 issue of the ABA Journal with this headline: “Corporations have a role (and a gain) in promoting the rule of law.”