Courts attempt to balance innovation with access in remote proceedings 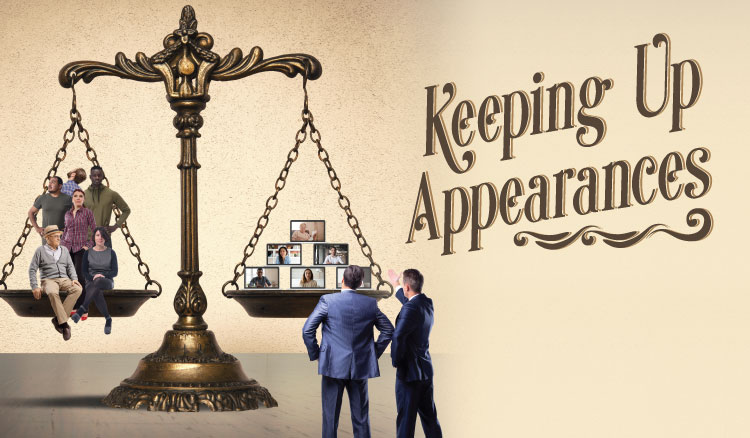 Editor’s Note: For nearly a year, legal professionals have been grappling with the implications of delayed justice while trying to balance the safety of court employees, jurists, lawyers and clients as the COVID-19 pandemic continues to ravage the United States. With thousands of trials delayed since the pandemic began last March, judges are tasked with prioritizing which cases to handle first and deciding whether to try cases in person. Courts nationwide are embracing remote technology, using video and audio platforms to conduct hearings and trials. These adaptations expand access to court proceedings; they also deepen the divide for those who lack proper internet access. Meanwhile, states are actively debating whether courts can open safely and summon citizens to sit on juries. The ABA Journal explores these challenges in this and Go-Live Debate: Judges differ on when it’s safe to hold in-person jury trials.

As a lawyer sparred with Justice Elena Kagan during livestreamed arguments at the U.S. Supreme Court in May, something burbled and slurped in the background.

It’s unlikely the public will ever know for sure. What’s more likely is that virtual hearings, and all of their anomalies and awkward moments, are here to stay.

Before the coronavirus pandemic, the judiciary was slow to innovate and resistant to virtual proceedings. Now courts are using every tool at their disposal, balancing safety with the need to keep the wheels of justice spinning. In New York state, as of Nov. 1, there were 1,157,918 pending local civil actions; and as of Oct. 4, there were 101,140 pending local criminal actions, according to data shared by court system spokesman Lucian Chalfen. In the San Diego court system, the second-largest in California, there was a backlog of 54,000 civil cases and 20,000 criminal cases, the San Diego Union-Tribune reported in September. Courts across the country are dealing with their own bottlenecks.

Although a newfound reliance on technology could ease courts’ caseloads and logjams, it also has the potential to usher in a new era of digital justice that widens access to more Americans. 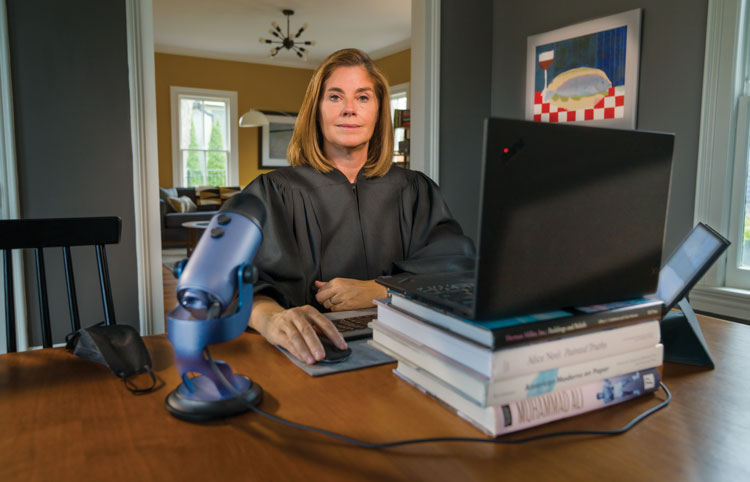 “This pandemic was not the disruption any of us wanted,” Michigan Supreme Court Chief Justice Bridget Mary McCormack told Congress in June. (Read more about McCormack, an ABA Journal Legal Rebel, in “Chief Influencer,” page 34.) “But it might be the disruption we needed to transform the judiciary into a more accessible, transparent, efficient and customer-friendly branch of government.”

Douglas Keith of the Brennan Center for Justice at the New York University School of Law welcomes innovation. He cautions, however, that because the country has grappled with racial injustice and inequality, the courts will need to weigh efficiency against the constitutional right to open court proceedings, especially since judges play as big a role in the justice system as police and prosecutors.

“It is crucial now more than ever that the public continues to have access to observe these proceedings and to know what’s happening in their courtrooms,” Keith says.

Before the Supreme Court began livestreaming, people lined up for hours to watch oral arguments. Now, anyone with a cellphone, laptop, tablet or computer can listen in.

Gabe Roth is executive director of the New York City-based group Fix the Court, which advocates for transparency at the Supreme Court and livestreaming and virtual hearings in state and federal courts.

“There’s value to having an in-person trial,” Roth says. “But at the same time, you can’t just shut down the criminal justice system or the federal court system or state court system because of a pandemic. You want [to be able] to avail yourself of modern technology.” 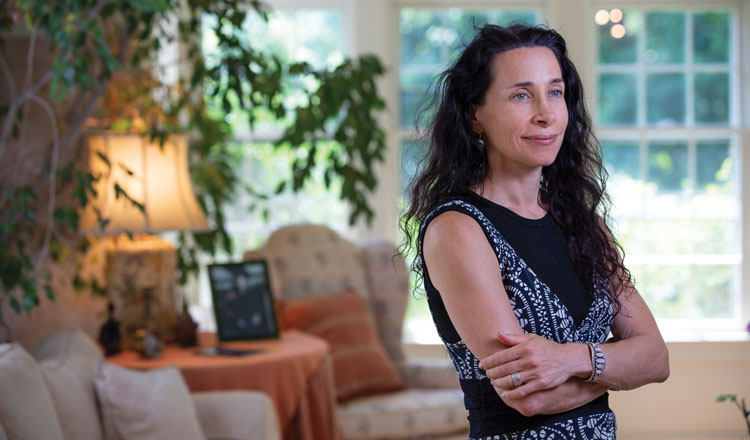 Simone Levine of Court Watch NOLA says it is vital to educate the public about how to accesss remote hearings. Photo by Steven Laschever.

Fix the Court asked the federal courts to livestream court hearings through their YouTube channels because the platform can more reliably handle traffic than call-in lines. In November, the group joined media organizations in writing to the courts asking for greater access after callers were bumped off a court hearing in Texas regarding whether 127,000 drive-in ballots should be thrown out. In December, the federal judiciary announced a two-year pilot program to livestream audio of hearings in 13 district courts.

The U.S. Supreme Court has previously ruled the public has a constitutional right to access court hearings. In 1980, the court established the public’s First Amendment right to attend a murder trial in Richmond Newspapers Inc. v. Virginia. The court also enshrined the right to watch lawyers question jurors in 1984 in Press-Enterprise Co. v. Superior Court of California.

In the years since, the fight for transparency in the court system has raged on. More recently, David Snyder of the First Amendment Coalition in San Rafael, California, confronted restrictions at a courthouse in Kern County Superior Court curtailing public access because of the COVID-19 pandemic. After the group filed the complaint, the California court announced in September it would livestream audio of its hearings.

Snyder believes video or audio livestreaming should never wholly replace in-person proceedings because body language, facial expressions and other nonverbal cues are lost or absent altogether if a hearing is in audio.

Court watchers, meanwhile, want to make sure the public and media can see and hear what’s happening during proceedings. Simone Levine, executive director of the group Court Watch NOLA in New Orleans, says funding and public education are vital so that people will know how to access virtual hearings in the Orleans Parish criminal courts.

“Court watchers have had a problem logging on to some of the Zoom proceedings,” Levine says. “Sometimes the wrong Zoom link is given. Sometimes we are thrown off the Zoom link, either intentionally or unintentionally.”

Other courts have fully embraced live hearings. In Texas, hundreds of judges livestream on Zoom through YouTube channels. The Texas Judicial Branch has a channel directory for each court on its website, and links are also on court websites.

The pandemic presents an opportunity that few could have foreseen before the coronavirus brought the justice system to its knees: a chance to modernize courts at breakneck speed.

Last year, a majority of states allowed virtual hearings. New Jersey, Connecticut, Delaware, New Mexico and Alaska mandated their use. Others, including New York, California and Texas, have urged their use while suspending conflicting rules, according to the National Center for State Courts. The technology’s rise comes after over 30 states and the District of Columbia suspended in-person proceedings for weeks or months after the March lockdown.

Scott Schlegel, a judge in Jefferson Parish, Louisiana, says it doesn’t make sense for lawyers to bill their clients for two or three hours of their time if they are coming into court for a five-minute pretrial conference. (Read more about Schlegel, an ABA Journal Legal Rebel, in “Going Digital,” page 39.) He predicts more courts will move pretrial conferences online post-pandemic.

Hearings that do not require witnesses all could work virtually, Schlegel argues, making the system “more efficient.” Jury trials are another story.

“If you’re dealing with a 12-person jury, with all those complications and the inability to see and make eye contact, and see and touch and feel the tangible objects that you need in a trial, I think that’s a problem,” Schlegel says.

In August, Pittsburgh attorney Daniel McLane of the firm Eckert Seamans participated in a two-day virtual civil bench trial in the U.S. Court for the Western District of Pennsylvania.

McLane says planning is crucial. He would like to see pretrial orders in virtual trials stipulating how exhibits should be shared among witnesses and attorneys, and protocols ensuring witnesses are seen clearly on camera.

Despite serious due process concerns in criminal cases, some courts have proceeded with online jury trials. In one of those virtual trials, jurors in a Travis County, Texas, court reached a guilty verdict in a traffic case in August.

Judge Nicholas Chu presided over the trial using Zoom on a desktop computer in his courtroom to communicate with attorneys, jurors and staff. The court did several dry runs with stand-ins and attorneys. Some jurors used cellphones to access Zoom.

Chu says next time jurors will use laptops or iPads because it is difficult to use Zoom’s gallery mode on a cellphone with multiple participants. He said hybrid remote and in-person hearings could become the norm.

“The biggest thing will probably be making sure that courts communicate clearly to people their expectations on how to participate, and making sure that if somebody says that they cannot participate because they don’t have these technological devices or high-speed internet, that the courts provide those resources,” Chu says.

In April, the federal judiciary sent a letter to Congress asking for $36.6 million in supplemental funding, in part to pay for “information technology hardware and infrastructure costs associated with expanded telework and videoconferencing.”

The U.S. House of Representatives passed an updated version of the Heroes Act in October covering $25 million of the funding. The Administrative Office of the U.S. Courts says it hopes Congress will cover the full amount in another iteration of the bill.

In a May 2019 study, the Pew Research Center found that 29% of adults with household incomes of less than $30,000 did not have a smartphone, 44% did not have home broadband services and 46% did not own a personal computer.

An April 2020 Pew study found that 53% of Americans view the internet as a must-have during the pandemic.

The need for at-home schooling further exposed the digital divide, and the justice system has to address the same gap.

“Communities that are more likely to be harmed by our justice system are less likely to have access to the high-quality technology that’s needed to use some of these tools,” Keith says.

If courts adopt a hybrid model that allows some in-person participation, judges and lawyers will have to adapt to the demands of technology.

Darrin Browder of Court Watch NOLA says months into the pandemic, he was still seeing judges struggling to turn on cameras or unmute microphones during hearings. Similarly, Judge Denise Langford Morris of the Oakland County Circuit Court in Michigan says in some civil and criminal cases, there are lawyers and clients who can’t afford broadband.

Roth of Fix the Court argues the pandemic has created an opportunity for the judiciary and courts to work with local governments and school districts to lobby for funding to close the gap. “We’re all trying to figure out how to make the best of the situation,” he says. “Now is a critical time for our court system, and hopefully we learn some important lessons from it.”

This story was originally published in the Feb/March 2021 issue of the ABA Journal under the headline: “Going Virtual: Courts attempt to balance innovation with access in remote proceedings” as part of the “Keeping Up Appearances” package along with “Go-Live Debate: Judges differ on when it’s safe to hold in-person jury trials”.