Courts are hearing new challenges to tax exemptions for religion 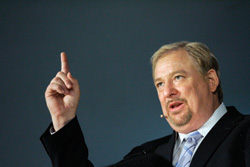 Rick Warren’s battles with the IRS may be over, but debate over the housing allowance is back in focus. AP Photo/Donna McWilliam.

Warren is the best-selling writer and leader of the evangelical Christian Saddleback Church in Orange County, Calif. As a “minister of the gospel,” under IRS rules he may receive a tax-free housing allowance from his church and apply it toward the cost of owning and maintaining a home.

Instead, Warren took the dispute to court, where the 9th U.S. Circuit Court of Appeals at San Francisco sua sponte questioned whether the clergy rental allowance was constitutional in the first place. It appointed Erwin Chemerinsky, now the dean of the University of California at Irvine School of Law, to brief the issue.

But before the court could rule, Congress quickly—and without dissent—passed the Clergy Housing Allowance Clarification Act of 2002. The bill gave Warren his exemptions, but also set the IRS “fair market rental value” rule into law. With no remaining issues left to decide, the 9th Circuit dismissed the case over Chemerinsky’s objections.

“The expressly stated purpose of the law was to moot the Warren case,” wrote Chemerinsky in a 2003 law review article arguing that the exemption was unconstitutional.

“If the government were free to grant discriminatory tax exemptions in favor of religion, then it would be free to impose discriminatory taxes against religion as well,” wrote Crabb in a decision filed Nov. 22. “Under the First Amendment, everyone is free to worship or not worship, believe or not believe, without government interference or discrimination.”

The very same day, a federal court in eastern Kentucky was considering the issue of standing in American Atheists Inc. v. Shulman, another lawsuit challenging taxation of religion. This suit, brought by three atheist groups unrelated to the Madison, Wis.-based FFRF, challenged all provisions giving favorable tax treatment to clergy, churches (a term the IRS uses for all places of worship) and religious organizations (nonchurch organizations that advance religion). The provisions are “without secular purpose and without rational explanation in law or in fact,” the groups argued.

The Wisconsin decision was enjoined pending the conclusion of appeals—the IRS appealed to the 7th Circuit at Chicago on Jan. 24—and it’s not yet clear how the Kentucky court will rule. But the Wisconsin decision has already caused an almighty fuss in religious communities.

A lot of money is at stake. Erik Stanley of the Alliance Defending Freedom, a Christian legal group preparing an amicus brief supporting the IRS, says the Wisconsin ruling could hurt “literally tens of thousands of very small churches” and their pastors, who often support themselves with second jobs. “In some [churches], the housing allowance is the only form of compensation that a pastor will have, because the church cannot afford to pay them anything else,” says Stanley, senior legal counsel for the ADF in Scottsdale, Ariz.

The Religion News Service estimated that if Crabb’s decision takes effect, clergy’s take-home salary could be reduced by 5 to 10 percent. That could be a substantial hit for people who, according to the Bureau of Labor Statistics, make an average annual wage of $47,880. (However, incomes vary widely between faiths and congregation sizes.)

Meanwhile, the U.S. Treasury would receive an extra $700 million per year, according to congressional estimates. And if the atheists’ case succeeds in nullifying all of the special tax treatment for religion, American Atheists says the federal government would collect $71 billion extra per year.

But for American Atheists, “money has nothing to do with it,” said Edwin Kagin, who was the national legal director of the Cranford, N.J.-based group until his death March 28. “There’s simply no articulable, rational reason why churches should be treated differently,” he said during an interview in January.

Tax exemptions for religion have their roots in British law, but these exemptions were enacted in the 20th century, often as a congressional reaction to IRS rules unfavorable to religion. The clergy housing allowance exemption dates to 1954, when Congress added it to a 1921 tax break for clergy who live in housing owned by their churches. The goal was to address the disadvantage to smaller religions that couldn’t afford to own property.

But the sponsor of the law, Rep. Peter Mack, D-Ill., also invoked the era’s fears of “a godless and antireligious world movement.” This, Chemerinsky wrote, showed “blatant favoritism for religion.”

The Wisconsin court agreed, saying a reasonable observer would see the housing allowance as an endorsement of religion. Under case law forbidding government from favoring religion over irreligion, the decision said, this violated the First Amendment’s establishment clause.

The case by the atheist groups also invokes the establishment clause, as well as the equal protection clause and Article VI of the Constitution itself, which says “no religious test shall ever be required as a qualification to any office or public trust under the United States.” The complaint says these were violated by IRS rules, resulting in belief-based discrimination against secular nonprofits.

In addition to the housing allowance, American Atheists takes issue with a parallel exemption for the rental value of church-owned housing. The case also challenges that churches automatically get tax-exempt status; are harder for the IRS to audit; and don’t file yearly information returns like other nonprofits. This puts atheist groups at a fundraising disadvantage, the complaint says, since atheist donors may not want to be publicly identified.

Even allies of religion have criticized the lack of transparency in church finances. After news reports raised questions about the lavish lifestyles of certain ministers, Sen. Chuck Grassley, R-Iowa, asked a group of religious and secular nonprofits to look into whether churches should make yearly IRS filings. They ultimately recommended that churches take voluntary action instead, saying requiring churches to file the form could “raise significant constitutional concerns.”

Though the atheist groups’ complaints mention abuse only in passing, a Freedom from Religion Foundation press release notes that IRS rules expressly permit clergy to “double dip” by using tax-free money to buy a home, then deducting interest on the mortgage from their taxes.

“We all pay more in taxes because they pay less,” says FFRF co-president Annie Laurie Gaylor.

Furthermore, Kagin added, having exemptions for churches and clergy requires the IRS to determine who and what qualifies.

“And therefore they have the power to decide what a religion is,” he said, “and that is precisely the type of thing the Constitution was designed to prevent.”

As far as the substance of the suit, Stanley also notes that the IRS permits housing allowances for military service members, overseas workers and others. He doesn’t believe it matters that these fall under different sections of the tax code.

“You look at it as a whole: Is religion getting some kind of special treatment that others are not getting? And that’s not the case,” he says.

But the 7th Circuit could still decide the FFRF case on standing, an issue the federal government—the actual defendant—has emphasized in district court. Among other arguments, the government suggested that even Gaylor and co-president Dan Barker could conceivably qualify as ministers under IRS rules because “minister of the gospel” has been interpreted broadly enough to include a variety of positions. It noted that certain IRS-designated ministerial functions, such as performing weddings, do not require theistic beliefs.

The Wisconsin court’s ruling said this “is difficult to take seriously,” but Stanley notes that the Supreme Court took an expansive view of religion in Vietnam-era conscientious objector cases.

Gaylor doesn’t buy it. “We are not ministers,” she says. “We are the antithesis of ministers, in fact.”

This article originally appeared in the May 2014 issue of the ABA Journal with this headline: “Almighty Fuss: Courts are hearing new challenges to tax exemptions for religion.”