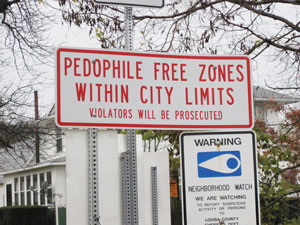 Residency restrictions eliminate so much housing that they force paroled offenders into homelessness. Creative Commons.

In 2006, California voters passed "Jessica's Law," a ballot initiative that prohibited registered sex offenders from living within 2,000 feet of a school or park. In 2011, crime analyst Julie Wartell of the San Diego County District Attorney's Office analyzed how much housing was left for those offenders. Consulting land-use files, she concluded that just 0.7 percent of multifamily parcels in the county were compliant.

That analysis came as part of a trial court’s hearing in In re Taylor, a habeas corpus case brought by four San Diego County parolees. All four planned to live with family or friends after leaving prison, but they couldn’t because the homes were not compliant with Jessica’s Law. Instead, they ended up living in the alley behind the parole office, in the bed of the (seasonally dry) San Diego River, in vehicles or in noncompliant homes. When plaintiff William Taylor ended up hospitalized, he was rearrested for failing to register the hospital’s address with police.

That’s part of why the California Supreme Court struck down the blanket application of Jessica’s Law in March’s In re Taylor (PDF). The justices noted that parole officers may impose residency restrictions on a case-by-case basis. But they unanimously agreed that universal application of the law violates offenders’ constitutional rights—and doesn’t keep children safe.

The law “has hampered efforts to monitor, supervise and rehabilitate such parolees in the interests of public safety, and as such, bears no rational relationship to advancing the state’s legitimate goal of protecting children from sexual predators,” now-retired Justice Marvin Baxter wrote.

Though the decision applied only to parolees in San Diego County, the California Department of Corrections and Rehabilitation soon extended it to parolees statewide. CDCR spokesman Luis Patino says the state attorney general’s office believes courts would apply Taylor to every county.

California is not the only such state. Later in March, a Michigan federal court struck down application of that state’s “geographic exclusion zones” to six plaintiffs, saying the law is unconstitutionally vague. And in February, the New York Court of Appeals ruled that all local sex offender residency laws are pre-empted by state law, which does not include residency restrictions.

Courts weren’t always so friendly to these challenges. The highest court to rule on residency restrictions, the 8th U.S. Circuit Court of Appeals at St. Louis, ruled in 2005’s Doe v. Miller (PDF) that Iowa’s residency restrictions did not violate offenders’ constitutional rights. That’s an important case, says professor Wayne Logan of Florida State University College of Law. Most courts considering federal challenges on the issue have followed it.

But there are signs that things are changing. Responding to compelling personal stories and mounting evidence that residency restrictions don’t work—and might even hurt public safety—courts are casting a more critical eye on these laws.

“There’s a public appetite for [sex offender laws], but there’s no evidentiary support that either registries or exclusion zones work,” says Miriam Aukerman, a lawyer for the American Civil Liberties Union of Michigan who represented the plaintiffs in the Michigan case. “And as a result, you’re seeing judges starting to rethink this.”

The facts of Taylor point to one of the biggest criticisms of residency restrictions: They often eliminate so much housing that they force ex-offenders into homelessness. A 2011 report from the California Sex Offender Management Board expressly noted that “nearly 32 percent of sex offenders on parole are homeless due to Jessica’s Law.”

This causes multiple public safety problems, says Jill Levenson, an associate professor of social work at Barry University in Miami Shores, Florida. By barring offenders from living with family members in noncompliant homes, she says, the laws reduce their chances of stable housing, stable jobs and social support, all of which are known to lower the chance of recidivism.

When offenders are homeless—or can plausibly claim to be homeless, then move into non-compliant homes—it’s also harder for police to keep track of them. That’s why the New Hampshire state police supported a bid to eliminate the state’s residency restrictions this year, and it’s one reason Palm Beach County, Florida, relaxed its restrictions in 2014.

And perhaps most damning, Levenson says the consensus among social science researchers is that residency laws don’t reduce recidivism. “We know from decades of research that most child sex abuse victims are well-known to their perpetrators,” she says. “So a person’s residential proximity … is really irrelevant.”

Those issues were part of the California Supreme Court’s rationale for finding that Jessica’s Law violates parolees’ fundamental rights under the 14th Amendment—rights to do things like establish a home, travel within the state and enjoy privacy and free association. Though parolees have limited constitutional rights, the court said, the law can’t survive even lowered scrutiny be-cause it has no rational relationship to its own goal.

Logan says the ruling bucks several trends. It’s not unusual for state high courts to strike down residency laws, he says, but they’re generally using state constitutions’ ex post facto clauses to nix retroactive application. And it is unusual for courts considering federal law to decide for plaintiffs, he says, because those courts generally follow Miller.

Professor J.J. Prescott of the University of Michigan Law School agrees that federal courts generally have been less friendly than state courts, but he notes that the Michigan decision, Doe v. Snyder (PDF), accepted vagueness arguments—which were rejected in Miller.

And, Prescott says, there’s some evidence that federal courts are compromising—not throwing out laws entirely, but voiding certain provisions. He points to a February decision from the Middle District of Alabama, McGuire v. Strange, which threw out requirements that offenders check in with two police agencies per week and get permission from two agencies before leaving the county. That judge denied other challenges to Alabama’s registration law but called it “the most comprehensive, debilitating sex offender scheme in the land.”

“The facts on the ground [are] changing, and that means the decisions are coming out differently than they otherwise would,” Prescott says. “They’re just not reflexively deciding in favor of the government, as they used to.”

Though Taylor was a victory for Californians subject to residency restrictions, it was paired with a less favorable case. People v. Mosley found that a judge may impose registration and residency requirements without violating the U.S. Supreme Court’s 2000 ruling in Apprendi v. New Jersey, which requires a jury to decide any facts that increase punishment.

Janice Bellucci, president of California Reform Sex Offender Laws and an attorney in Santa Maria, says Mosley “ducked the issue entirely” of whether residency restrictions are punitive. She’s also not entirely happy with Taylor because it doesn’t affect residency requirements for people who have finished parole. As a result, she says, “we’re going to spend a long time in court trying to clarify the meaning of Taylor.” Her organization expects to file some of those claims.

Bellucci argues that residency restrictions are tantamount to banishment. For example, she says, ex-offenders cannot legally live anywhere in the dense city of San Francisco. And in one case she handled against the Orange County city of Cypress, the only parcels open to ex-offenders were a big-box retail area and a cemetery.

This hurts not only ex-offenders but also the spouses, children and parents who can’t live with them, she says.

“It’s one thing if in fact restrictions would achieve the purported goal, but they don’t,” Bellucci says. “When you have ineffective laws that are violating people’s constitutional rights, it’s time to get rid of them.”

This article originally appeared in the July 2015 issue of the ABA Journal with this headline: “A Place to Call Home: Courts are reconsidering residency restrictions for sex offenders.”