Courts in a muddle over 4th Amendment’s community caretaking exception 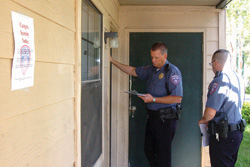 Some view it as a monstrous leviathan that could devour much of search-and-seizure protections. Others view it as simply a common-sense, rational justification for what police must do when performing emergency functions.

Either way, the community caretaking exception to the Fourth Amendment has prompted confusion among courts over whether it must be limited to vehicles, or whether it gives police an additional reason to enter homes without a warrant.

“The name ‘community caretaking exception’ is seductive because it helps convince the public that a search is more justified or proper than it really is,” says Little Rock, Ark., attorney John Wesley Hall Jr., author of the treatise Search and Seizure.

The Fourth Amendment guarantees individuals the right to be free from unreasonable searches and seizures, meaning the government may not search them or their property without a warrant backed up by probable cause.

But through the years, the U.S. Supreme Court has crafted a number of exceptions to the warrant requirement, such as plain view, exigent circumstances, hot pursuit, search incident to a lawful arrest, consent, border search, and stop and frisk.

The idea behind community caretaking is that police do not always function as law enforcement officials investigating and ferreting out wrongdoing, but sometimes may act as community caretakers designed to prevent harm in emergency situations.

“Community caretaking is the name that has come into vogue by many lower courts,” Hall says, “but courts have used this type of rationale to justify similar searches under different names, such as exigent circumstances or inventory searches.”

While the Supreme Court limited the extent of community caretaking to vehicles, state courts and the federal circuits are split over whether to expand the exception to homes.

The defendant argued the officers intended to engage in investigatory police work rather than act as community caretakers to see whether he was in need of emergency care. The Wisconsin high court disagreed with the defendant, noting that “the officer’s subjective intent does not invalidate an otherwise reasonable exercise of the community caretaker function.”

“Under the totality of the circumstances, the community caretaker exception to the warrant requirement resulted in permissible police conduct,” the Wisconsin high court wrote. “The community caretaker function was reasonably exercised by the police officers because the public interest in the search outweighed Gracia’s privacy interests.”

Meanwhile, in a New Jersey case decided in March, police received a 911 call from a landlord who had neither seen his tenant nor been able to contact him for a couple of weeks. The police entered the home without a warrant to conduct a “welfare check” on the tenant. The officers did not find the tenant, but they did find marijuana and evidence of money laundering and unlawful possession of firearms.

The defense filed a motion to suppress, contending that the warrantless search of the home violated the Fourth Amendment and the corresponding provision of the state constitution. The state countered that the search was justified because the police were acting as community caretakers when they entered the home.

The New Jersey Supreme Court sided with the defendant in State v. Vargas, finding that “the police did not have an objectively reasonable basis to believe that an emergency threatening life or limb justified the warrantless entry into Vargas’ apartment.”

But the New Jersey high court conceded that “the breadth of the community caretaking doctrine has been the subject of much discussion.”

Some courts confine community caretaking to vehicle searches. Others suggest it can justify warrantless searches of the home if there is a reasonable belief there is a particular emergency or exigency.

LITTLE TO GO ON

Part of the difficulty is that the U.S. Supreme Court has not written much about community caretaking and has referred to it sparingly. Only three times has the high court used the term: Cady v. Dombrowski (1973), South Dakota v. Opperman (1976) and Colorado v. Bertine (1987). All three decisions involved searches of automobiles.

The court first mentioned the term in Cady, in which it upheld the warrantless search of a Chicago police officer’s vehicle in Wisconsin. The officer had been involved in a one-car accident and was arrested for drunken driving. After learning he was an officer, the police conduct-ed an inventory search of the car to recover the officer’s weapon. “Local police officers,” the Supreme Court said, “unlike federal officers, frequently investigate vehicle accidents in which there is no claim of criminal liability and engage in what, for want of a better term, may be described as community caretaking functions, totally divorced from the detection, investigation or acquisition of evidence relating to the violation of a criminal statute.”

And in Opperman the court wrote that it “has traditionally drawn a distinction between automobiles and homes or offices in relation to the Fourth Amendment.”

Yet some experts believe that because the Supreme Court used the term in automobile cases exclusively, the community caretaking concept should not seep out to justify searches of homes.

“The use of Cady, which arose in the auto context to allow police entry of homes, creates obvious doctrinal strain given the court’s singling out of home interiors for particular privacy protection,” says Florida State University law professor Wayne A. Logan.

Meanwhile, the federal circuits are split on just how expansive the exception may be. In 2010, the 3rd U.S. Circuit Court of Appeals at Philadelphia wrote in Ray v. Township of Warren that “there is some confusion among the circuits as to whether the community caretaking exception set forth in Cady applies to warrantless searches of the home.”

The appeals court said that three circuits limit the concept to auto searches—the 7th (based in Chicago), 9th (San Francisco) and 10th (Denver)—while the 6th (Cincinnati) and 8th (St. Louis) sanction home searches. The 3rd Circuit agreed with the 7th, 9th and 10th but gave officers in that case qualified immunity because the court said the law was not clearly established.

Some courts have broken community caretaking searches into three separate categories: (1) emergency aid, (2) automobile impoundment or inventory-type searches and (3) a public servant exception. Certainly, the police have greater justification to act when there is a true emergency. However, Logan explains that “courts are watering down the emergency aid exception, and they are doing so by use of a doctrine that arose in a readily distinguishable context.”

“It may be noteworthy that the Supreme Court’s limited use of the term has in all three instances involved vehicles, so in that sense perhaps the community caretaking function is indeed limited to automobiles,” says University of Illinois law professor Wayne R. LaFave, the author of a six-volume text on search and seizure law frequently cited by courts across the country, including the Supreme Court.

However, LaFave points out that courts frequently “have upheld police entry of private premises to aid persons in need of assistance, to protect property, and for other purposes not involving enforcement of the criminal law.”

Ultimately, the Supreme Court may need to wade into the troubled waters of community caretaking to explain the concept it identified 40 years ago. “It would be helpful if the court were to clarify whether the community caretaking doctrine applies to home entries,” says Logan, who identified more than three-dozen circuit splits over Fourth Amendment law in an October Vanderbilt Law Review article. “This would not only resolve the split; it would provide a measure of much-needed doctrinal clarity.”