Creature Comforts: When We Need Help, There Should Be a Menagerie of Options 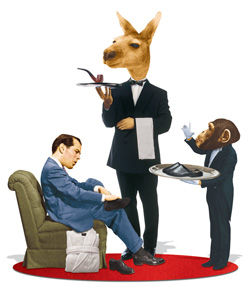 If it serves its master like a dog or comforts like a dog, why can’t it be a monkey?

Though that may sound like a riddle, it’s actually a very real and legitimate question.

For years, owners of service animals and therapy animals other than dogs have been wondering why their critter of choice is any less acceptable for providing services or comfort.

Sure, dogs tend to get the good press with that leading-the-blind thing, but isn’t it just as noble for a monkey to retrieve a remote control?

A pigtailed macaque named Kira was providing assistance and comfort to cancer patient Amanda Govannucci of North Versailles, Pa., until the state game commission seized Kira. In June, a district judge ruled in favor of the commission and fined Govannucci’s husband for possession of a monkey without a permit.

But monkeys aren’t the only type of service or therapy animal to raise the hackles of bureaucrats. In Broken Arrow, Okla., Christie Carr had volunteered at an animal shelter to help cope with her clinical depression. She soon became emotionally attached to a paralyzed young kangaroo named Irwin. Carr dressed, fed and bathed Irwin, and even had him certified as a therapy animal.

Town officials said Carr was in violation of a local ordinance against keeping exotic animals. Carr said she might leave town because she could not bear to give up her pal joey.

In May, the Broken Arrow city council voted to allow owners of exotic animals to apply for a permit if certain criteria are met. Don’t you just love a happy ending? But wait, it gets better. A required $50,000 insurance policy was out of reach for Carr, who is unemployed, but an anonymous donor picked up the tab.

And it’s more than just mammals that come to the aid of us needy humans. Reptiles and birds do their share as well—and face the same types of resistance.

Daniel Greene, who lives outside Shelton, Wash., found his pet boa constrictor wasn’t always welcome at various businesses he frequented. Greene’s snake was trained to hug him when it feels an epileptic seizure coming so he can avoid injuries, but ophidiophobes don’t like having that icky thing on their premises.

A St. Louis man prone to violent outbursts needed a way to maintain control. Jim Eggers suffers from a bipolar disorder and would often tell himself aloud to calm down. Now his African gray parrot, Sadie, handles that chore for him. When she senses that Eggers is on the verge of a psychotic episode, she says, “It’s OK, Jim. Calm down, Jim.”

Eggers takes Sadie around town with him but is sometimes not allowed to enter buses or businesses.

So who’s going to sort out this whole mess? Earlier this year, the U.S. Department of Justice declared that only specially trained dogs and miniature horses qualify as service animals under the ADA, though states are free to enact exceptions as they see fit.

So it seems that the dog is still man’s best friend and, of course, everyone loves a pony. But how about a little love for the rest of our scaly, feathered and furry friends?