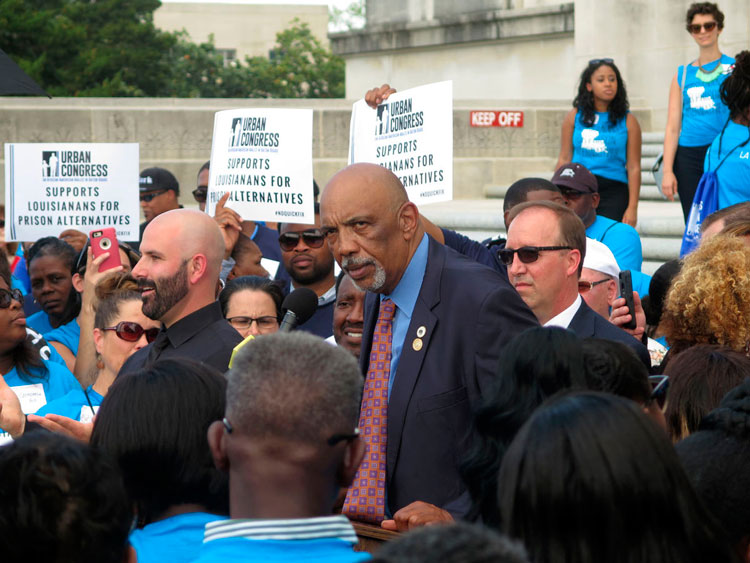 Budget concerns were part of the motivation in Louisiana, according to people involved in passing the justice reinvestment package there. Gene Mills, president of the Louisiana Family Forum and an advocate for justice reinvestment, says he personally feels he must follow the biblical command to visit prisoners—but he thought recidivism, and the associated public safety and financial costs, was a more effective argument.

“I focused on recidivism simply by virtue of the fact that it was a healthy place to start the conversation,” he says. “And it was one which most of us could agree upon.”

Elain Ellerbe, Louisiana state director for Right on Crime, adds that the business community was interested partly because there’s a shortage of skilled workers. Job training programs—which are aimed at reducing recidivism—could help.

Unlike Texas, which started its reforms in 2007, Louisiana could draw on Pew; since 2010 it has been funded by the DOJ’s Bureau of Justice Assistance to help states with justice reinvestment. Pew staff spent months in the state, conducting research and helping decision-makers interpret the data. Those people were chiefly from the Louisiana Justice Reinvestment Task Force, a creation of the legislature that included members from throughout the justice system, as well as legislators, a faith group and a community development group.

After about nine months of study and eight public meetings gathering community input, the task force made its recommendations to the legislature. It suggested expanding eligibility for alternatives to incarceration and opportunities to be released from prison, changing certain kinds of sentences, reducing parole and probation sentences, eliminating or changing certain collateral consequences of felony conviction, and funding programs in job skills training and behavioral health.

That was where the real show began, say Louisianans involved in the effort. The project had support from the governor and legislators from both parties, as well as public support. But it also met with considerable skepticism from a powerful force in Louisiana politics: the district attorneys and the sheriffs. Bruce Reilly of Voice of the Experienced, a New Orleans organization that advocates for (and is run by) formerly incarcerated people, says it became clear that “this was going to be the district attorneys’ package.”

“We were going to get probably as much as we could wrangle out of the DAs’ association,” says Reilly, a former jailhouse lawyer and Tulane Law School graduate. “There’s many a politician that will tell you straight out: ‘I’ll see what my DA and my sheriff think.’ ”

And for those groups, it was a deal-breaker to include people convicted of violent crimes, says Mills. One of those groups, the Louisiana District Attorneys’ Association, declined interview requests from the ABA Journal. Instead, executive director E. Pete Adams sent a prepared statement saying the LDAA never supported changes to penalties for violent crimes.

“Victims of violent crime deserve protection from offenders, and past victims deserve the justice that they were guaranteed at sentencing,” the statement says. “We chose to fix rather than kill the legislation, because we believed that some of the changes were in keeping with our mission to improve the justice system in Louisiana.”

In the end, that opposition led to the removal of most provisions relating to violent crimes. This disappointed many supporters. Ellerbe says her experience working with prisoners has taught her that low-risk versus high-risk is a more useful distinction than violent versus nonviolent. Reilly adds that the “violent criminal” label helped create Louisiana’s problems.

“It’s the people with the long sentences who were convicted of violent crimes that pose the huge blockade to any kind of sane budget and sane amount of people in one community to be locked up,” he says.

Another recommendation missing from the package is a major one: a proposed revamp of Louisiana’s felony classification system. Many states classify crimes at uniform levels that carry uniform penalties. Louisiana does not, which makes its sentencing inconsistent, sometimes wildly. As the task force report pointed out, Louisianans can be imprisoned 20 times longer for possessing a stolen smartphone than for stealing it in the first place.

The task force had proposed a class system, and the legislature introduced a bill to create it, but the district attorneys objected. Adams says in his prepared statement that it was designed to reduce sentences wholesale and “a solution in search of a problem.” So the legislature voted to create a task force to study the issue—in which Adams said his group would participate—and make recommendations during its 2018 legislative session.

Those unresolved issues are why advocates think the 2017 bill package is just the beginning of justice reform in Louisiana.

“It’s going to take a while to undo the damage that has been done,” says Graybill of the SPLC. “But the package of reforms that passed this spring is a good, strong first step.”

Harrell says everyone involved knew it would take multiple years; Edwards said as much when he signed the package. And for precisely that reason, Harrell doesn’t anticipate as much pushback as he sees in other states.

“The leaders who pushed forward this agenda and others who came along have expressed across the board their commitment to continuing this,” he says. “The momentum is tremendous in the state of Louisiana.”