How lawyers can effectively cross-examine psychiatrists and psychologists 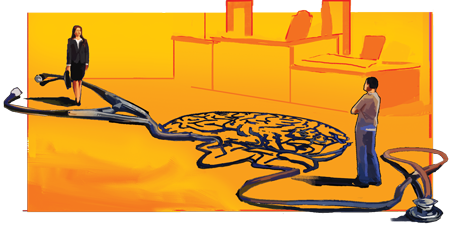 Lawyers often find themselves facing off against psychiatrists or psychologists during litigation. Whether it’s a personal injury or medical malpractice case, a hearing to determine fitness to stand trial or part of a sentencing hearing, courts nationwide are ringing with the testimony of these experts.

They are among the toughest witnesses to challenge because their testimony can have elements of hearsay as well as subjectivity. That’s because patients’ medical complaints to mental health professionals are subjective, and the diagnosis built on those complaints often is similarly subjective. Even if the testimony is based on data from tests mental health experts administer, few lawyers have the depth of knowledge about the field to match wits with psychiatrists or psychologists.

That’s a fact attorney William Chamblee knows all too well. He admits that when he began his career about 30 years ago, he was intimidated to cross-examine psychiatrists and psychologists. All it took to wipe out that fear was a baptism by fire.

“I crossed Dr. Phil [McGraw] as an expert in a med-mal case in the late 1980s in a little town out in West Texas,” says Chamblee, a founding partner of Chamblee Ryan in Dallas. “He hadn’t yet been an expert for Oprah Winfrey in the beef case in Amarillo. But he was often hired by plaintiffs lawyers to be an expert witness in litigation. I’d done some crosses before his, but he was the hardest one.”

Chamblee credits his win in that case in part to preparation and a strong cross-examination. “I’d read many of his previous depositions, and I knew if I didn’t get control of him during cross, I wouldn’t be successful,” Chamblee says. “A psychologist or psychiatrist is usually a more difficult cross than other types of experts—especially one with a strong personality.”

However, there are strategies to erode—even destroy—the validity of such witnesses, according to two people who counsel lawyers on how to effectively cross-examine mental health professionals.

Bruce Leckart, a Los Angeles-based forensic psychologist and professor emeritus of psychology at San Diego State University, has developed a set of rules for cross-examining mental health professionals. One rule is to never ask them about the patient directly but instead confine questions to their report. Another is to always determine whether they have taken a complete history of the patient’s symptoms and complaints to support the diagnosis.

Dorothy C. Sims of Ocala, Florida, focuses her practice almost entirely on cross-examining expert witnesses. Sims was a member of the three-lawyer defense team for Casey Anthony, who was acquitted in 2011 of the murder of her 2-year-old daughter, Caylee. Sims says psychiatrists’ and psychologists’ processes can be deeply flawed and vulnerable to attack. Your goal, she says, should be to hit early at the deposition stage, so your opponent is forced to withdraw the mental health expert—ideally after it’s permissible to name a replacement.

It’s also important to understand the differences in training and education among mental health professionals. Psychiatrists have earned a medical degree and completed a general medical internship and then a residency in psychiatry, Leckart says. Because of their medical training, they can write prescriptions, order and interpret brain scans or blood work, and perform physicals, Sims says.

You’re not likely to see one kind of professional more than the other in any particular type of case. But Sims says certain types of mistakes are common with each. In her experience, psychiatrists often administer psychological tests without the proper training.

Psychologists, while trained to administer psychological tests, can misadminister them, misinterpret them or misrepresent the results, Sims says. These experts also often rely on nonscientific psychological tests, some of which Sims says are created by the mental health experts for the insurance companies for whom they testify.

Whatever the expert’s training, Leckart and Sims say effective cross-examination will be the same. It starts with a deep dive into the expert’s background and should include submitting freedom of information requests to licensing bodies and employers, along with a search of court records.

Sims says these experts typically deny having been sued and never admit to having had malpractice claims against them, which her digging often finds to be untruthful. “We go to the website of the court where the person lives or practices and check all the lawsuits against them,” she says. “I found that one expert had been charged twice with hitting a woman.”

When you meet the expert at a deposition, you come out swinging by attacking their biases, says Martin Hoffman, a senior partner at the North Miami Beach, Florida, office of Hoffman, Larin & Agnetti.

“I like to knock that expert off that high chair where he’s the instructor at some university, and therefore the voice of reason, very quickly,” he says. “I want to know what percentage of his income derived from testifying, which you can usually get through a subpoena to a university. I also find it very effective to draw out that he charges $150 an hour to see patients, but that here he’s charging $500 an hour.”

Don Carlson, the senior founding partner of San Francisco’s Carlson, Calladine & Peterson, impeaches experts by asking about “cash therapy,” in which plaintiffs miraculously get better upon receiving a judgment. Carlson also emphasizes that they base their opinions on claims made by the patient. He points out that experts can treat patients infrequently or that a treatment was related solely to the litigation.

You also can attack someone’s credibility by attacking their processes. The Diagnostic and Statistical Manual of Mental Disorders is the American Psychiatric Association’s seminal guide on mental health disorders. Leckart says many experts don’t even match their diagnosis to the symptoms listed in the tome.

“It’s clear what the diagnostic criteria are, and the doctors always have an enormous gap between the diagnostic criteria and the data in their report—they don’t have the appropriate data to diagnose the disorder they diagnose,” he says. “One of the most frequent disorders plaintiffs allege is a major depressive disorder. DSM requires that at least five of nine symptoms be present for that diagnosis. If you compare the doctor’s report against the DSM criteria, the doctor often hasn’t provided enough information to support that diagnosis.”

You don’t have to rely on the DSM, says Carlson, who gets similar information from Neuropsychological Assessment by Muriel Lezak, which he calls a “must-review” before crossing a psychologist.

According to Leckart, many diagnoses also are built on an inadequate patient history, which lawyers can cross effectively by remembering a mnemonic that he calls FIDO-C.

“To take a complete history of a patient’s symptoms, the doctor must obtain information about the frequency of the symptoms, their intensity, their duration, their onset and their course over time,” he says.

Another part of every psychiatrist’s and psychologist’s evaluation is the mental status exam, in which an expert sits face to face with a patient and asks standard questions that elicit relatively observable responses, Leckart says. This tests memory, attention, concentration, insight, judgment and verbal skills. Experts’ reports often include only conclusions, such as: “Ms. Jones’ memory was impaired.”

“That’s not good enough,” Leckart says. “That’s a summary conclusion. Ask during the deposition or trial: ‘What techniques did you employ that led you to conclude that Ms. Jones’ memory was impaired?’ Also, you know there are no data in the report, so ask: ‘Where in your report can I find the data collected that demonstrate the impairment?’”

It’s all about asking the right questions and taking nothing at face value.

This article appeared in the July 2017 issue of the ABA Journal with the headline "Facing the Challenge: How lawyers can effectively cross-examine psychiatrists and psychologists."