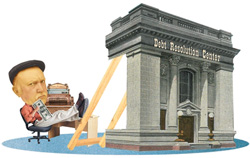 Being in arrears—whether it’s a mortgage or a credit card bill or a “loan” that comes with usurious rates and visits from a guy known as “the Hammer”—can be quite stressful. Failure to pay can result in a damaged FICO score, not to mention kneecap.

Adding to that stress is the knowledge that legitimate debts are going to be turned over to collection agencies, which are generally considered to be about as diplomatic as SWAT teams.

Debt collectors have made the leap to the 21st century in terms of how they go about plying their trade. Some of the Internet-savvy methods they’ve learned include cyberstalking their prey on Facebook and other social networking sites, as well as creating fake websites on which the debtor is named and shamed.

Some consumers are looking to courts for relief—and getting it. In March, Judge W. Douglas Baird of the Sixth Judicial Circuit of Florida ordered Mark One Financial to refrain from using Facebook or any other social networking site in pursuit of Melanie Beacham, who owed money on a car loan. The order also called for the debt collection agency to stop contacting the woman’s family and friends on Facebook, a practice used with increasing frequency by the industry.

A particularly egregious case occurred in Minnesota. Collection agency Bramacint had used caller ID “spoofing” to make it appear as if the call was coming from Tosha Sohns’ mother-in-law (not to be a stickler, but wasn’t caller ID invented to avoid taking calls from the mother-in-law?).

But the agency allegedly sunk even lower when, after gleaning personal facts from Sohns’ Facebook page, the collector said something to the effect of: “Wouldn’t it be terrible if something happened to your kids while the sheriff’s department was taking you away?”

Countless other examples could be cited here, but none of them compares to the sheer chutzpah of Unicredit America Inc. of Erie, Pa.

The company was ordered shut down in November after being accused of operating a fake courtroom, which it dubbed a “debt resolution center.” Unicredit allegedly sent employees dressed as sheriff’s deputies to debtors’ homes, the implication being that they would be taken into custody if they did not appear at a phony “court” hearing.

To lend an air of credibility to the ruse, debtors entered through an impressive oak doorway with brass hardware. Inside were a judge’s bench, witness stand and spectator seating, just like a real courtroom. The “judge” reportedly dressed in black to appear authoritative.

Pennsylvania Attorney General Tom Corbett issued a statement in which he called the bogus setup “an unconscionable attempt to use fake court proceedings to deceive, mislead or frighten consumers into making payments or surrendering valuables.”

The Fair Debt Collection Practices Act was heard groaning from (allegedly) being broken so badly.