Did the EPA go too far in regulating greenhouse gases? SCOTUS to decide 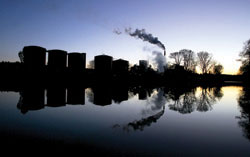 In 2007, the U.S. Supreme Court issued a landmark environmental ruling that greenhouse gases are “air pollutants” under the Clean Air Act.

In a 5-4 decision in Massachusetts v. Environmental Protection Agency, the court said the recalcitrant EPA had to regulate greenhouse gas emissions from motor vehicles if the agency determined that such gases (mostly carbon dioxide) endangered the public’s health and welfare.

Within a few years, and with a change from a Republican to a Democratic administration, the EPA issued several major actions on greenhouse gases. One will come before the justices Feb. 14 in United Air Regulatory Group v. EPA. The question is whether the EPA permissibly determined that its decision to regulate greenhouse gas emissions from vehicles triggered Clean Air Act requirements that “stationary sources”—such as power plants and factories—must now obtain permits. Those permits may require costly pollution abatement measures.

Some environmental advocates view the case as a relatively modest inquiry into the scope of the agency’s authority in an area in which the Clean Air Act is less than clear.

“This is a relatively small issue, and it’s kind of a warm-up for industry fighting the bigger rules regulating greenhouse gases that are going to come out,” says Deborah A. Sivas, director of the Environmental Law Clinic at Stanford Law School.

But that’s not how big business and its allies view the matter.

“This case is about the [EPA]’s determination to regulate greenhouse gas emissions under the Clean Air Act no matter how much the agency had to distort and even rewrite statutory provisions to do so,” says the brief of the U.S. Chamber of Commerce, one of many parties challenging the agency’s actions.

Shannon L. Goessling, the executive director and chief legal counsel of the foundation, says environmentalists and the Democrat-led EPA “want to pursue a regulatory agenda that they can’t get past Congress. You cannot circumvent Congress and do by executive fiat that which Congress does not approve.”

The high court’s 2007 Massachusetts ruling stemmed from a decision by the EPA under President George W. Bush not to regulate greenhouse gas emissions from new vehicles. Certain states challenged that, and the Supreme Court overturned the agency’s argument. The court held that greenhouse gases come within the EPA’s regulatory authority, in light of the Clean Air Act’s “sweeping definition of ‘air pollutant.’ ”

The EPA under President Barack Obama began making a series of regulatory findings and rules that led to the new case. The first was its 2009 “endangerment finding,” in which the agency found that global warming was due to the observed increase in man-made greenhouse gas concentrations.

The agency found that U.S. motor vehicles were responsible for producing nearly one-quarter of all greenhouse gas emissions in this country. In a 2010 joint regulation with the U.S. Department of Transportation, the EPA issued its “tailpipe rule,” which regulates greenhouse gas emissions and sets fuel economy standards for new vehicles. The joint rule had the backing of the U.S. auto industry, which preferred a federal standard over potential varying state regulations.

The EPA’s decision to regulate vehicle emissions then triggered permit rules under the Clean Air Act that are intended to “prevent significant deterioration” of air quality. Those rules, known as the PSD program, apply to stationary sources—typically, a power plant—that emit “any air pollutant” above a threshold set in the statute.

The EPA decided in a separate 2010 rule that when the tailpipe measure took effect in early 2011, the requirements under the PSD program and another provision of the Clean Air Act automatically applied to stationary sources emitting greenhouse gases in quantities above the statutory threshold.

This posed a problem, though, because the threshold for the PSD program is 100 or 250 tons per year (depending on the type of facility) of any particular pollutant. Because greenhouse gases, particularly carbon dioxide, are emitted in much higher volumes than other pollutants, the EPA’s rules threatened to sweep in many more stationary sources that emitted greenhouse gases—hospitals, schools, apartment buildings and other facilities.

“Adding some 6.1 million permit applications to the 14,700 that permitting authorities now handle would completely overwhelm” them, the agency said at the time. It planned to phase in the permit requirements by focusing on the largest emitters of greenhouse gases. While the rule excluded smaller emissions sources for six years, the EPA made no guarantees that it wouldn’t seek to impose the permit requirements on them at a later date.

Various states and industry groups challenged all the post-Massachusetts EPA actions in the U.S. Court of Appeals for the District of Columbia Circuit. A panel of that court upheld the endangerment finding and tailpipe rules, and it held that the challengers lacked standing with respect to the other regulations. The full D.C. Circuit denied rehearing en banc.

The justices granted review to the question of whether the EPA properly found that its decision to regulate vehicle emissions triggered the permit requirements for stationary sources.

Meanwhile, Texas and 12 other states argue that Massachusetts v. EPA should be overruled if it compels the EPA to regulate greenhouse gas emissions from stationary sources.

Eric Groten, a partner in the environmental law section of Vinson & Elkins in Austin, Texas, says the EPA seems to believe “that it had to destroy the Clean Air Act in order to save it.”

“Whatever the right result is here, it cannot be what EPA did because it concedes it had to rewrite important portions of the statute,” adds Groten, who represents the Coalition for Responsible Regulation, an industry group that was part of the challenge to the EPA rules in the D.C. Circuit and that filed a brief on the petitioners’ side in the Supreme Court.

In an early-stage brief, U.S. Solicitor General Donald B. Verrilli Jr. argued the D.C. Circuit had correctly held that the EPA’s interpretation of the key Clean Air Act provisions was “compelled” by the text of the statute and by the Supreme Court’s Massachusetts decision.

“Because provisions of the PSD program apply to any air pollutant regulated by the EPA, and because greenhouse gases indisputably are such pollutants, applying that program’s permit requirements to stationary sources of greenhouse gases is fully consistent with Congress’ intent,” Verrilli said in the brief.

David Doniger, policy director for the climate and clean air program of the New York City-based Natural Resources Defense Council—an environmental group that backs the EPA—says the agency “shouldn’t be faulted for being candid” with its “absurd results” analysis.

“What EPA did with the tailoring rule is to come up with a way to catch the biggest sources” of greenhouse gas emissions for permitting, Doniger says. “There’s not a single hospital, school, apartment building or hot dog stand that’s been forced to do anything.”

Meredith Wilensky, the associate director of the Center for Climate Change Law at Columbia University law school, notes that the PSD permit requirement is not the EPA’s only avenue for regulating greenhouse gases.

As part of President Obama’s Climate Action Plan, announced in June, the EPA recently issued proposed regulations on greenhouse gas emissions from new power plants. Those proposed rules aren’t part of the case before the court, though they are likely to be challenged in court when they are finalized, says Wilensky, whose policy center is not involved in this case.

This article originally appeared in the February 2014 issue of the ABA Journal with this headline: “Clearing the Clean Air Act: Justices to look at whether the EPA went too far in regulating greenhouse gases.”