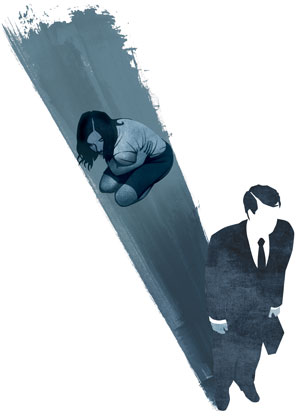 One in three women and one in four men in the United States above the age of 18 have been subjected to acts of physical violence by an intimate partner, according to the National Coalition Against Domestic Violence, and some experts describe the problem as a national epidemic. To mark National Domestic Violence Awareness Month in October, President Barack Obama issued a presidential proclamation calling such acts "an affront to our basic dignity and humanity."

Unfortunately, the legal profession has not been immune to domestic violence incidents, as the case reporters are littered with examples of attorneys who have faced professional discipline after engaging in such acts.

In Oklahoma, for instance, a lawyer represented a woman in divorce proceedings. Although the attorney and client were both married, they began what the court termed a “sexual dating relationship.” Later, the attorney head-butted the woman in the face and put his hands on her neck. He pleaded nolo contendere to criminal charges and later faced professional disciplinary proceedings.

In imposing a suspension, the Oklahoma Supreme Court wrote in its 2014 decision in State ex. rel. Oklahoma Bar Association v. Zannotti: “As incidents of domestic and intimate partner abuse rise and become the focus of legislation and public attention, it becomes more incumbent on this court to protect the public by sending a message to other lawyers that this misconduct is considered a serious breach of a lawyer’s ethical duty and will not be tolerated.”

The court determined that the attorney violated Rule 8.4(b) of the Oklahoma Rules of Professional Conduct, which provides that it is ethical misconduct for an attorney to “commit a criminal act that reflects adversely on the lawyer’s honesty, trustworthiness or fitness as a lawyer in other respects.” (The Oklahoma rule closely tracks Rule 8.4 in the ABA Model Rules of Professional Conduct.)

In March 2015, the Iowa Supreme Court imposed a suspension on an attorney who entered into an intimate relationship with a client and later assaulted her. The attorney struck the woman in the face multiple times as she tried to take an anti-anxiety pill. The attorney later pleaded guilty to assault causing bodily injury.

The court wrote in Iowa Supreme Court Attorney Disciplinary Board v. Blessum that “we have no difficulty concluding that conviction for assault causing bodily injury reflects adversely on his fitness as a lawyer.”

“I think what we are seeing is that there is more reporting of domestic violence and more prosecution of domestic violence cases,” says Leslie C. Levin, who teaches professional responsibility at the University of Connecticut School of Law in Hartford. “Once lawyers are convicted of a crime, that information often must be reported to disciplinary authorities,” she says. ”Many states have rules that determine how disciplinary authorities must proceed, depending on the nature or seriousness of the crime.” “The number of reported cases of domestic violence has risen over the last 30 years, and that is due to greater awareness that domestic violence is a legal issue as well as a social issue,” says Peter Joy, who teaches ethics at the Washington University School of Law in St. Louis.

“The [number of] reported cases involving lawyers has also risen, and that has contributed to an upward trend in attorney disciplinary cases involving domestic violence,” Joy says. “Bar authorities and courts agree that discipline should be imposed on attorneys for this nonprofessional misconduct, but there has not been a uniform approach to the appropriate discipline. Some form of suspension is the usual discipline, but the length of the suspension often varies. In general, there does seem to be a trend toward increasing the punishment.”

Joy says that “significant punishment usually reflects on the severity of the wrong committed, and by levying longer suspensions—including in some cases indefinite suspensions—bar disciplinary authorities and courts are taking the position that domestic violence is a serious offense. In cases where the survivors of the domestic violence are also former clients, there can be issues of the lawyer beginning the intimate relationship while there was still a client-lawyer relationship, which is also prohibited under ethics rules.”

Suspension may be appropriate, particularly for attorneys who violate other ethics rules as well, such as engaging in intimate relationships with clients. But what about one whose physical outburst involves a family member behind closed doors? In other words, what connection or nexus is required between the physical violence incident and the practice of law?

“So, for example, some argue that if the lawyer’s crime involved dishonesty, the lawyer should be sanctioned because the lawyer is not likely to practice law in a trustworthy fashion. Alternatively, if the lawyer fell asleep while driving and killed a pedestrian, even though he may be convicted of negligent homicide, this conduct arguably has no nexus to his fitness to practice law.”

It is generally appropriate for an attorney who has pleaded guilty to domestic violence charges to face some form of professional discipline, says Keith A. Swisher of Scottsdale, Arizona, who often represents lawyers in ethics matters. “Criminal convictions, especially felonies, typically lead to fast-tracked discipline, although states, of course, vary in their definitions of applicable crimes and their process for automatic or expedited discipline,” Swisher says.

“In addition to disciplinary authorities’ typical treatment of criminal convictions,” he says, “domestic violence connects to the practice of law in several ways, including that the victims have periodically been former or current clients, and that the violent behavior poses risks to future clients and opposing counsel, among others.

Looking at the larger context, Joy says, “Punishment for non-professional misconduct also is thought to preserve the reputation of the legal profession and enhance public confidence in the legal profession. Basically, this means to be a great lawyer the lawyer not only has to do a good job for clients but be someone who does not violate the law in his or her nonprofessional life. It is the same with judges.”

This article originally appeared in the November 2015 issue of the ABA Journal with this headline: “Seeking Cures for an Epidemic: Disciplinary actions against lawyers who commit acts of domestic violence appear to be on the rise.”