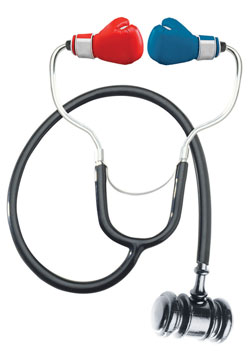 The nation’s highest court is taking up the major challenge to the federal health care law this spring, as well as blockbuster cases on immigration and political redistricting. So it is hard to fathom that more than four years ago, Time magazine asked this question on its cover: “Does the Supreme Court still matter?”

“The court turns its attention to ever smaller cases related to ever narrower points of law,” the magazine said in the October 2007 story, which suggested that Chief Justice John G. Roberts Jr., then in his third term, was comfortable with “a steady shrinking of the judicial role in public policy and a handing over of issues to the states.”

That hardly seems to hold up for the current term, when the high court is grappling with profound questions about the limits of congressional power, perhaps to the most significant extent since the court weighed the constitutionality of New Deal economic programs in the 1930s.

The paramount case on the spring docket is the one involving the Patient Protection and Affordable Care Act, the 2010 legislation signed into law by President Barack Obama. The court will hear 5½ hours of oral arguments in late March on questions including the highly divisive minimum-coverage provision, also known as the individual mandate.

The amount of argument time devoted to the cases is extraordinary, though not unprecedented.

“It’s clearly exceptional,” says Jerry Goldman, research professor at the Chicago-Kent College of Law as well as creator and director of Oyez, a website with an archive of Supreme Court oral argument re cordings going back to 1955. “You have to go back to Brown v. Board of Education II to find a case argued for 2½ times the standard oral argument time, which was then two hours.”

Brown II, which dealt with the remedies stemming from the court’s landmark desegregation ruling in Brown I in 1954, was argued for 13¼ hours over four days in 1955. Other cases with exceptionally long oral arguments include South Carolina v. Katzenbach in 1966, with seven hours devoted to the Voting Rights Act of 1965, and six hours in 1966 for Miranda v. Arizona, the landmark case dealing with the rights of criminal suspects.

Since 1970, when the court reduced the standard oral argument time from two hours to one, only a handful of cases have exceeded the norm, including the campaign finance cases of Buckley v. Valeo (four hours in 1975) and McConnell v. Federal Election Commission (four hours in 2003).

One side debate for the health care case stems from public pressure to televise the proceedings. Members of Congress have been pushing the justices to open their proceedings, and the cable network C-SPAN has offered to air all 5½ hours.

In 2000, when the Bush v. Gore election case was argued twice before the high court, the justices agreed to the release of same-day audio. That prompted a period when same-day audio was authorized for a handful of prominent cases. But the justices grew wary of making case-by-case determinations of what was worthy of such treatment, and in 2010 they began offering audio of all their cases at the end of each week of arguments.

As of early January there was no indication from the court that it would accede to the demands to televise the health care arguments or provide same-day audio.

When the justices finally delve into the law, they will do so in several segments. While many observers consider the individual insurance mandate the big question, the justices will start with a preliminary issue: whether a federal law known as the Anti-Injunction Act means the current challenge is premature. Under this view, the law’s individual mandate may not be challenged until individuals who refuse to buy health insurance have to pay a penalty.

The 4th U.S. Circuit Court of Appeals at Richmond, Va., threw out a challenge to the health care law on that basis. While the Supreme Court did not take up the 4th Circuit case, it did accept the Obama administration’s suggestion to consider the Anti-Injunction Act issue; the issue will be argued for one hour on March 26.

The next day, the court will hear two hours of arguments about the individual mandate. This is the heart of the case, asking whether Congress has the power under the Constitution’s commerce clause to require everyone to purchase health insurance or pay a penalty.

Two other federal appeals courts upheld the minimum-coverage provision, and both issued opinions on the law’s side by influential appellate judges appointed by Republican presidents. In the Cincinnati-based 6th Circuit, Judge Jeffrey S. Sutton (an appointee of President George W. Bush) said in a concurrence that the “national regulation of a $2.5 trillion industry, much of it financed by health insurance sold by national or regional health insurance companies, is economic in nature.”

And writing for the U.S. Court of Appeals for the District of Columbia Circuit, Senior Circuit Judge Laurence H. Silberman (an appointee of President Ronald Reagan) said in the majority opinion that neither the Constitution nor Supreme Court precedent limits Congress to regulating only individuals who are engaged in economic activity.

“The right to be free from federal regulation is not absolute and yields to the imperative that Congress be free to forge national solutions to national problems, no matter how local—or seemingly passive—their individual origins,” Silberman wrote.

On March 28, the justices will hear 90 minutes on the issue of “severability”—whether the rest of the health care law could remain in effect if the individual mandate were struck down. This issue is raised in an appeal brought by the National Federation of Independent Business, which argues that the health care law “cannot ‘function in a manner consistent with … the original legislative bargain’ once the heart of that bargain has been ripped out.”

Also on that day, the court will hear a final hour of arguments on whether the law’s expansion of the Medicaid program for insuring the poor is unconstitutional. Florida and 25 other states argue that the federal law “holds the states hostage” to expanding their Medicaid programs to dramatic new levels with no guarantee of increased federal funding.

University of Texas Professor Lucas A. Powe Jr., a leading Supreme Court historian, is one of a number of scholars who see parallels between the health care case and the 1930s Supreme Court’s handling of New Deal issues.

“The question is,” says Powe, “is this more like 1936 or 1937?” In the former year the court was in the midst of striking down New Deal programs; in the latter year, the court began upholding such programs and staved off President Franklin D. Roosevelt’s court-packing plan.

“I cannot imagine that John Roberts intends to go down in history as the chief justice who struck down one of the most significant statutes in American history,” Powe says of the health care law.

Shesol says Time’s 2007 cover story suggesting the declining influence of the Supreme Court reminds him of that New Deal era.

In 1934, on the eve of the high court’s attack on FDR’s economic recovery programs, Princeton University professor Edward S. Corwin published a book called The Twilight of the Supreme Court.

“I venture to suggest that it is the plain duty of the court to give over attempting to supervise national legislative policies,” the professor wrote.

“Corwin was a leading observer of the court,” says Shesol, whose 2010 book on that era is titled Supreme Power: Franklin Roosevelt vs. the Supreme Court. Corwin predicted in his 1934 book that it “was not at all unlikely” that the justices would uphold Roosevelt’s National Industrial Recovery Act as a valid exercise of congressional power under the commerce clause.

The very next year, the Supreme Court struck down key provisions of the recovery law in Schechter Poultry Corp. v. United States. The vote was 9-0, and it was one of many cases in which the court reined in New Deal programs, prompting Roosevelt’s court-packing plan and eventually the “switch in time that saved nine.”

Among the parallels between the 1930s Supreme Court and today is that conservatives will be arguing that the health care case presents “a powerful challenge to the role of the federal government as we have understood it over many decades,” Shesol says.

“What the court decides may well have profound implications for the shape of government in this generation,” he says, “and our ability or inability to address problems at the national level.”