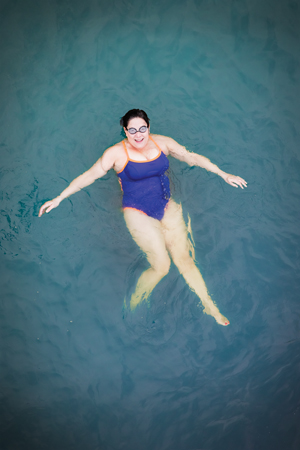 Courtney Moates Paulk doesn't just swim with sharks in the courtroom—she's in the water with them, too. An open-water marathon swimmer, Paulk earned the sport's Triple Crown in 2013 by traversing the English Channel, the Catalina Channel and the perimeter of Manhattan Island. Last year, she became one of only seven people in the world to have crossed the shark-infested waters of Cape Cod Bay, completing the swim in a record-setting 9 hours and 43 minutes. And she does it all alone, assisted only by a small crew following her in a boat to monitor her progress and toss food down to her. No wetsuit, no breaks and no respite from the busy construction law practice she maintains as chair of the litigation section of Hirschler Fleischer in Richmond, Virginia.But Paulk's accomplishments are more than personal victories. Every swim she's undertaken since 2010 has been for charity, and she's raised more than $50,000 for a variety of organizations, including local nonprofits that give swimming lessons to low-income kids and major research foundations such as the American Heart Association.

Q. Do you think swimming has benefited your practice?

A. Definitely. It really helps with organization and discipline. When I can get up at 5 a.m. and get to the pool before going into the office, I feel much more focused. I think it’s also helped me market myself. That’s not why I do it by any stretch of the imagination, but people do think it’s cool. People think you’re tough, and in my construction law practice, I feel that it helps me clear the hurdle of being a woman, which may or may not exist with some people.

Q. Have you ever been concerned about being injured in the water?

A. I did get bitten by a seal once in the Catalina Channel. There was a seal swimming next to me; then he or she just started nibbling on the back of my foot.

Q. What’s the most challenging swim you’ve ever done?

A. Last October, I did 24 miles in 24 hours. It was in a pool, and I swam a mile at the top of every hour, from 9 a.m. to 9 a.m. the next day. It was a fundraiser for the Greater Richmond Aquatics Partnership. I’ve never been so happy to finish anything in my entire life.

Q. Is there ever a point in a long swim when you want to quit?

A. There are definitely dark places. Like when I’m puking my guts out, which happens, or when I’m getting hit in the head by wave after wave. I just try to figure out: “How can I take my mind off of this?” You have to shift your focus to something else.

Q. I don’t think I could get past the throwing up.

A. The first time it happens, it’s a little scary and kind of gross. But then it just becomes something that happens, and usually I feel much better afterward. It is what it is.

Q. Do you ever think about work when you’re swimming?

A. I do not. It’s a mystery to me, because my mind is always going, but I just think about swimming.

Q. Do you have any special routines to protect yourself against all that chlorine and salt?

A. In the pool, I wear a cap, and that helps. Also, if you wet your hair with regular shower water before you get into the pool, your hair follicles fill up with the regular water, so when the chlorinated water gets under your cap, it doesn’t soak into your hair as much. The salt mostly impacts your tongue and mouth. If I am in salt water and swimming for more than a couple hours, my tongue and lips swell up. After about 24 hours, the sides of my tongue start to peel off. When I do my feeds, I have my boat crew throw me a line with a bottle of watered-down mouthwash that I can rinse with and a little bit of Vaseline that I can put on my lips and gums.

Q. How do you raise money with your swimming?

A. Usually, whoever you’re raising money for gives you a webpage to help keep track of donations. To raise the money, I send out emails, and I post on Facebook and on my blog.

Q. What’s your next aquatic adventure?

A. I am going to Cork, Ireland, this summer to do a long-distance swim camp. For 2018, I’ve booked a double English Channel swim—England to France and back again—so that’s part of why I want to do Cork, to get more experience in cold water over a number of days.

Q. You recently returned from Jamaica. Was that for a swim?

A. No, that was for my husband! He said, “Can we just take a vacation where I am not throwing bottles at you from a boat?”

This article originally appeared in the June 2015 issue of the ABA Journal with this headline: “Swimming with Sharks: This Virginia lawyer raises money for charity by swimming across long, cold and challenging stretches of water—and sets records at the same time.”