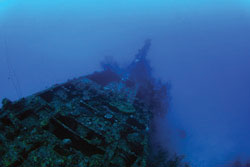 In the early morning hours of Feb. 17, 1944, American forces launched Operation Hailstone, a three-day air and sea assault on the Imperial Japanese Navy’s South Pacific home base, the tiny island of Truk. When the smoke cleared, Truk Lagoon had become one of the largest ship graveyards in the world, setting into motion the Allied victories that would lead to the end of World War II in the Pacific theater.

Fast-forward to spring 2013. Chicago litigator Bob Franco, a partner at Franco & Moroney, and his daughter Nina traveled more than 7,000 miles to descend into the clear, calm waters of this Micronesian state to see firsthand the legendary wreckage that attracts divers from around the world. (Truk is also known as Chuuk, its official name since 1986.)

No matter the destination, Franco has his preparation down cold. He always brings his own gear—about 80 pounds of it—and enough mobile devices to reach the office whether he’s in the middle of an ocean or the Arabian Desert (which he has done from both places). Although he trusts his staff to handle virtually everything while he’s away, he still prepares for any situation.

“I set up my communications like a Navy jet. There’s always a contingency plan,” he says. In his go bag: a laptop; external batteries; universal power adapters; a U.S. cellphone serviced by AT&T a U.K. cellphone serviced by T-Mobile; a waterproof, shockproof satellite phone; and a waterproof satchel to keep it all safe. Often, the only time he’s truly unreachable is when he’s underwater.

This dive trip was different from others because of its historical focus. Franco and his daughter were part of a group organized and led by Harold Bach, co-owner and course director at Professional Dive Training & Travel. The eight-day excursion included not only the means to see the wreckage, but also enough instruction to fully understand the experience.

“Every morning our group assembled after breakfast, and they’d tell us about the first boat that we’d be diving. For example, with the San Francisco Maru—sunk by Americans—they’d tell you about the cargo, how it fit into the Japanese war planning effort, and how it went down,” he says. “You got a sense of the Japanese side of the war and also learned about the base, how big it was and what happened to the local population.”

He and Nina explored cargo holds filled with provisions like beer bottles and bullets, and medical rooms so pristine that he could make out the markings on the glass lightbulbs. But the dive wasn’t entirely benign: In addition to the normal hazards of diving to depths of up to 175 feet, there was also a risk posed by hazardous chemicals like cordite leaching out of unexploded munitions. Franco says divers were warned never to remove their regulators, a common practice when encountering an underwater air pocket. “Because of the acids and that cordite, you’d have some bad results,” he says.

Franco was struck not only by the size of the lagoon, but also by the immensity of the ships. “You’d get to the bottom and realize it’s not the bottom of the ocean—it’s the top of a ship,” he says. They were surrounded by water and, at the same time, totally immersed in history.

• Time out of the office: Two weeks

• Time-off tip: Make time differences work for you. During the day on a dive trip, Franco is often underwater—meaning he’s unreachable—or on a dive platform, where it’s too harsh and unstable to bring a phone. Depending on his destination, however, it often doesn’t matter: “By the time I get back to my room, it’s daytime in Chicago,” he says, where it’s business as usual.

• Important to bring: A satellite phone. “Clients don’t really care if you’re on the road. They just want a quick response and to get things done,” Franco says. Traveling to remote locations makes keeping in touch difficult, but not impossible.

“Many places will say they have the Internet, but they don’t,” he warns. The best bet is a satellite phone. “I can’t download or look at anything on the Web, but I can get emails and text,” he says. Franco rents his, which is easy and economical to do via myriad online services. Another perk of the satellite phone, he says: “I become the most popular guy on the boat.”

• Easy to leave: A camera. Franco often travels with camera buffs, and he simply gets a copy of their photos.