By Kathryn A. Thompson 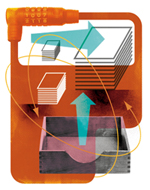 Globalization and technology are changing the practice of law in the United States and around the world in unprecedented ways. The ABA Commission on Ethics 20/20 is at the forefront of the association’s efforts to stay ahead of those changes.

When Carolyn B. Lamm, a partner at White & Case in Washington, D.C., appointed the commission at the beginning of her term as ABA president in 2009, she asked that it investigate ways to enable U.S. practitioners to compete with legal providers in other countries while continuing to protect the public and the core values of the profession.

That daunting mission has given the commission plenty of issues to consider. Among them is outsourcing legal work and support services. While outsourcing has become a relatively common practice among U.S. law firms, there are still many questions about its proper scope and regulation. The Ethics 20/20 Commission is expected to release its conclusions and recommendations on outsourcing in 2011.

In the meantime, however, practitioners engaged in outsourcing must do so in accordance with current ethics rules and opinions. A key consideration is whether a lawyer must disclose to a client that some work on a case is being outsourced and whether the client must consent to the outsourcing.

“There is nothing unethical about a lawyer outsourcing legal and nonlegal services, provided the outsourcing lawyer renders legal services to the client with the ‘legal knowledge, skill, thoroughness and preparation reasonably necessary for the representation,’ as required by Rule 1.1” of the ABA Model Rules of Professional Conduct, stated the association’s Standing Committee on Ethics and Professional Responsibility in Formal Opinion 08-451 (issued Aug. 5, 2008).

In its opinion, the ethics committee referred to a variety of outsourcing functions, ranging from administrative and support services such as photocopying, document management and computer maintenance to legal services such as research, preparing legal briefs and drafting patent applications.

“There is no unique blueprint for the provision of competent legal services,” the opinion notes. “Rule 1.1 does not require that tasks be accomplished in any special way. The rule requires only that the lawyer who is responsible to the client satisfies her obligation to render legal services competently.”

Other rules come into play depending on the nature of the outsourcing, the opinion points out. When a law firm outsources administrative functions, it must meet the requirements of Model Rules 1.6 (Confidentiality of Information) and 5.3 (Responsibilities Regarding Nonlawyer Assistants) because the providers generally are nonlawyers with access to confidential client information outside the lawyer’s direct control and supervision. When actual legal services are being outsourced, lawyers at the firm are obligated under Model Rule 5.1 (Responsibilities of Partners, Managers and Supervisory Lawyers) to ensure that lawyers under their supervision protect the confidentiality of client information and otherwise adhere to professional conduct rules. (The Model Rules are the direct basis for lawyer ethics codes in every state except California.)

ABA Model Rule 1.6 generally prohibits a lawyer from revealing information relating to the representation of a client unless the client gives informed consent or the disclosure “is impliedly authorized in order to carry out the representation.” (Rule 1.6 also allows disclosure when a lawyer reasonably believes it is necessary to prevent death, bodily harm or serious financial injury, or to prepare a legal claim or defense in a controversy arising out of the representation.)

Ethics authorities disagree about whether lawyers are “impliedly authorized” under Rule 1.6 to employ outside service providers who will have access to confidential client information. Those jurisdictions concluding that there is no implied authorization require that a lawyer first obtain the client’s informed consent before sharing information about the client’s case with outside service providers.

In reaching that conclusion, the committee distinguished Formal Opinion 88-356 (Dec. 16, 1988), where it held that a client ordinarily is not entitled to disclosure that its legal work is being performed by a temporary lawyer. The committee noted that the earlier opinion “was predicated on the assumption that the relationship between the firm and the temporary lawyer involved a high degree of supervision and control, so that the temporary lawyer would be tantamount to an employee, subject to discipline or even firing for misconduct. That ordinarily will not be the case in an outsourcing relationship.”

Ethics opinions issued at the state level have been mixed on the question of whether implied authorization is adequate when legal work or support services are outsourced.

Ohio is one jurisdiction that has adopted the holding of ABA Ethics Opinion 08-415 with respect to client consent. In Advisory Ethics Opinion 2009-06 (Aug. 14, 2009), the Ohio Supreme Court’s Board of Commissioners on Grievances and Discipline cited the ABA opinion in concluding that Ohio’s corresponding versions of Rules 1.2 (Scope of Representation and Allocation of Authority Between Client and Lawyer), 1.4 (Communication) and 1.6 all require a lawyer to obtain a client’s informed consent before outsourcing legal or support services to lawyers or nonlawyers.

The contention that outsourcing is impliedly authorized under Rule 1.6 “fails to pass ethical muster,” the Ohio opinion states. “Client confidentiality is a hallmark of the attorney-client relationship. When a client engages the services of a law firm there is justifiable expectation that confidences remain within the law firm.”

The one exception to the informed consent requirement, states the Ohio opinion, is when a firm temporarily engages the services of a nonlawyer to work on a legal matter under the close supervision and control of a lawyer in the firm. “Under such circumstances, the nonlawyer functions as an employee within the law firm under the same conditions of supervision as an employee,” the opinion notes.

Rules 1.2 and 1.4 provide further support for requiring informed consent from a client before outsourcing legal support services to nonlawyers, according to the Ohio opinion.

The North Carolina State Bar similarly concludes that a lawyer has an ethics obligation to obtain a client’s written informed consent to outsourcing legal support services. In most cases, states 2007 Formal Ethics Opinion 12 (April 25, 2008), “the reasonable expectation of the client is that the lawyer retained by the client, using the resources within the lawyer’s firm, will perform the requested legal services.”

At least two other states, however, have concluded that lawyers have implied authorization under Rule 1.6 to make confidential client information accessible to outside providers of legal support services.

In Advisory Ethics Opinion 2003-03 (undated) (PDF), the Vermont Bar Association’s Committee on Professional Responsibility concluded that a lawyer may use an outside computer consultant to retrieve electronic files that contain confidential client information, but that the lawyer “will actively manage the nonlawyer to protect the confidentiality of the client’s information.”

The Committee on Professional Ethics of the Massachusetts Bar Association reached a similar conclusion in its Opinion 05-04 (March 3, 2005). The opinion states that prior client consent is not necessary pursuant to Rule 1.6 when a lawyer provides a third-party software vendor with access to client information stored on the firm’s computer to support and maintain a computer software application. “We believe that it is ‘well-known among the general population’ that computer systems are an integral and essential tool of the modern-day legal profession, and that those computer systems, and the software that they operate, must be made available to technicians and other trained support personnel more often than we desire for the purpose of keeping them running,” the opinion states. “It would be impractical and unrealistic to expect a lawyer to delete or ‘scrub’ all confidential client information from his or her computer before allowing it to be serviced.”

While ethics opinions differ on the issue of client consent to outsourcing legal work or support services, it is prudent for a lawyer to disclose the nature of any outsourcing relationship to the client at the outset of the representation if confidential client information is at stake. The lawyer should inform the client of the risks of disclosure and give the client the opportunity to opt out of the representation before any issues arise under Model Rule 1.6.

Kathryn A. Thompson is a research counsel for ETHICSearch, a service of the ABA Center for Professional Responsibility. This article is based on a forthcoming book on ethics and technology to be published by the center.