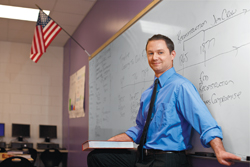 Dennis Kass was a high school debate coach while attending law school. When his students found out that he was studying law, Kass says, they often asked him for advice.

The experience led Kass, then a third-year at DePaul University College of Law, to create a career path for himself where he could be both a teacher and a legal aid lawyer. In 2009 he found a job at Little Village Lawndale High School in Chicago that, on top of making him a social studies teacher, also allowed him to start a legal clinic.

“I work full time as a teacher and spend about 30 hours a week doing pro bono,” says Kass, who graduated from law school in 2006. The clinics, which operate as part of the Chicago Law & Education Foundation that Kass helped create, provide pro bono legal services to about 1,000 individuals each year. The clinics are financed by a $3,000 grant from the Crossroads Fund, a Chicago foundation that supports progressive groups.

Kass would like to get more funding to expand the program. But for now he is using newly minted, unemployed lawyers to help man the school-based clinics.

The school sites refer people to legal aid groups or lawyers who will handle the matter pro bono. Much of the work, Kass says, involves criminal, immigration or family law matters.

Kass also involves the students in the clinics. After training, the students help handle client intake. “In addition to stern lecturing, I asked them to sign a confidentiality agreement,” Kass says of his young volunteers. “So they understand they’re not supposed to share information.”