By By Philip N. Meyer 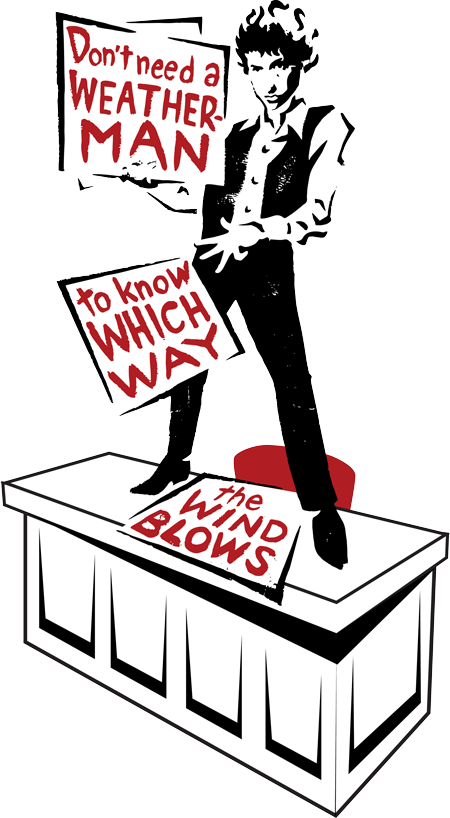 “There were a lot of better singers and better musicians around these places, but there wasn’t anybody close in nature to what I was doing. ... I knew the inner substance of the thing. I could connect the pieces.”  –Bob Dylan, Chronicles, Volume 1

Before Bob Dylan won the Nobel Prize in literature, he had a profound influence upon lawyers and judges, especially mid- to late-career baby boomers like myself. Academic symposia, numerous articles and even some careers were built upon Dylan’s work and its intersections with the law.

Perhaps more important, as Adam Liptak observed in the New York Times, Dylan is, by far, the most-cited songwriter or popular artist in American judicial opinions. And these citations are not merely add-ons or throwaways providing appellate judges and Supreme Court justices with the opportunity to display stylistic flair or pop culture literacy. Indeed, just the opposite: Dylan’s lyrics are intrinsic to the judicial reasoning in appellate opinions.

That is, Dylan’s lyrics provide propositional authority and embody understandings of shared fundamental legal or cultural truths. For example, Chief Justice John G. Roberts Jr.’s conceptual notion of standing, and more specifically a lack of it, is captured in Dylan’s all-purpose aphorism: “When you ain’t got nothin’, you got nothin’ to lose” (dissenting in Sprint Communications Co. v. APCC Services Inc., 2008). And Justice Antonin Scalia, who was ever the literalist, skimmed the title off an early Dylan song without attribution, mocking the majority’s ducking an issue by rationalizing about the rapidly changing nature of technology: “The-times-they-are-a-changing is a feeble excuse for disregard of [a legal] duty” (City of Ontario v. Quon, 2010).

As professor Alex B. Long observed in a Fordham Law Review symposium in 2011 devoted to the narrative jurisprudence of Dylan, his lyrics have been lifted innumerable times in appellate court opinions, and their complex meanings and open-ended imagery have been spun in seemingly endless directions.

For example, another of Dylan’s famous aphorisms about the power of intuition to predict the obvious—“You don’t need a weatherman to know which way the wind blows”—has been recurrently cited like a judicial mantra. Dylan’s lyrics have morphed from popular culture into our text-based legal culture in a way no other contemporary popular artist ever has. So when a judge needs to breathe life into an opinion, it is often Dylan’s words that rise to the surface, drawn up from the vast trove of his lyrics, an unofficial judicial default mode of sorts.

Bob Dylan, the outsider-storytelling troubadour, by the metrics of judicial citations and by the substance of how his lyrics are used, is our most influential pop cultural voice. Rephrasing it idiomatically, as I pretend that Dylan might do, he is located just a little north of Shakespeare on some unofficial judicial map, and perhaps just a dab south of the Bible.

But I don’t come close to doing “justice” to Dylan in the way that Dylan alone can do. Or as he puts it, “there’s no success like failure, and that failure’s no success at all.”

Dylan’s songs adhere to our collective lawyer-imaginations in a way that so many marvelous poet-troubadours of the ’60s—including Leonard Cohen and Townes Van Zandt, Joni Mitchell and Neil Young, or even, a few years later, Bruce Springsteen—do not. Likewise, Dylan’s lyrics stick in ways that other profoundly important songsters (from Woody Guthrie to Hank Williams to the rockers of the ’50s and ’60s to, of course, the endless river of eloquent bluesmen drifting across the face of American music) don’t, can’t and never will.

Why have so many judges, academics and, yes, lawyers of my generation glommed on to Dylan’s earlier songs? Some of the reasons are obvious. Music was the dominant art form of the mid- to late-1960s when baby boomer lawyers were coming of age. And Dylan’s songs were dominant then in a different way than other songsters and pop artists. Even in our current culture of celebrity, Dylan is more of a deity than a celebrity. Although Dylan—drifter-outlaw-outsider—was offended and troubled when hung with the cross of being the voice of his generation, he was nevertheless always the messenger of the complex meanings embedded deep within the consciousness of his times. As Dave Van Ronk observed in Martin Scorsese’s documentary No Direction Home, Dylan tapped deeply into the collective unconscious of the times.

Dylan was also incredibly productive, writing songs at a superhuman clip. Where Cohen, another sometimes prophetic poet-troubadour, took months or years to compose songs, Dylan’s work was completed in minutes. Like Robert Johnson returning from the crossroads, Dylan seemed demonically possessed. Or, as Allen Ginsberg put it, borrowing from Buddhists and other Beats, “First thought, best thought.”

Dylan’s songs and stories held our experiences and transformed our imaginations. While others wrote songs about finding and losing love, Dylan’s emotional and intellectual palette was infinitely varied. His songs provided an intersection of all the eclectic streams, rivers and tributaries of American music.

With an impossible confidence and strength, his gravelly and authoritative, yet imperfect, voice went anywhere and everywhere. There were no apparent boundaries: from journalistic story songs to aspirational folk ballads; from songs with sweetly stolen melodies to spiritual meditations and mystical religious incantations; from reconfigured endless blues to flat-out badass, yet always-lyrical rockers.

And—of special relevance to aspiring lawyers—so much of Dylan’s material was ultimately about justice. About the limitations of law. About justice and injustice in society and inside of ourselves.

From the first aspirational songs of youthful hope and longing (“Blowin’ in the Wind”) to the journalistic story songs (“The Lonesome Death of Hattie Carroll,” “Hurricane”) and then on to the dreamscapes infested with dark images of American injustice (“Blind Willie McTell”), Dylan discovered a personal and idiomatic language that spoke intimately to so many of us. He knew what he was doing, too, although he was often purposely evasive whenever he spoke about the magic of his art. In Quintilian’s words, “To avoid all display of art in itself requires consummate art.” Or, as Dylan observed idiomatically, he simply “knew the inner substance of the thing and could connect the pieces.”

Lawyers love Dylan, I think, because his voice and his story songs speak so directly to parts of ourselves that are typically discounted in our professional lives—especially in lawyers’ careful, meticulous professional language, and in our text-based grammatically correct forms of written expression. He reminds us that the creative, the musical and the intuitive are not lost inside of us in our practices.

What do I mean exactly? In law, the written and especially the printed word is given primacy over oral performance and expression; it is implicitly a higher form of expression. As communications theorist Walter Ong observed, the literate eye (and the lawyer’s “I”), especially when evaluating printed text, is perhaps the singular discriminating and judging function. We direct the focus of the eye, and our analytical attention, when we read text. Lawyers are trained to focus their critical abilities upon printed words, regardless of whether the text is telling a story or presenting a legal argument. We read to command and employ texts purposefully; we seldom if ever sacrifice our disbelief to narrative or poetry. We adjust reading speeds, jump over what is unimportant or irrelevant, make implicit and unstated critical assessments about what is and what is not on the page.

Sounds speak directly to us in ways that the written word can never do. We cannot close our ears. We are drawn into songs by their melodies and rhythms. Songs sung by sirens seduce us. Songs sung by storytelling troubadours call up associational experiences and emotions. It is the musical soundtrack of the movie that tells us how to feel about the images on screen, suggesting how to connect the scenes into story.

Dylan provides his own soundtrack to the imagery and idiom of his own complex movies; both his voice and the voices of the instruments tell us how to feel about the images he projects onto the screen of our imaginations.

But Dylan’s poetic genius goes beyond this. Listen to Patti Smith’s performance of “A Hard Rain’s a-Gonna Fall” at Dylan’s Nobel Prize ceremony (on YouTube)—a prophetic warning now recast in our own times. Recall Percy Shelley’s famous dictum: Poets are not merely authors of language and composers of music; they are institutors of laws and “the unacknowledged legislators of the world.”

Through poetry and song, Dylan reopens parts of ourselves, legislating the world in ways that are often discounted because of the focused analytical and strategic judgmental work that most lawyers are typically trained and paid to do.

Thank you, Bob, for reminding us that other parts of our soul are central to our work as well.

This article originally appeared in the April 2017 issue of the ABA Journal with this headline: “Decision Dylan: Our most-cited songwriter in judicial rulings brings complex poetry to court opinions.”