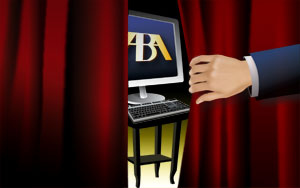 In this increasingly digital age, an organization is known and measured largely by the online face it presents through the glow of computer screens.

With that reality in mind, the ABA has been engaged during the past several months in an intensive effort to redesign and retool its website.

The first phase of that effort will be unveiled in February, when a new ABA home page goes online, along with streamlined content and better tools for navigating through the site.

The goals of the project are to fill the ABA site with more content relevant to practicing lawyers, to make it easier to find that information, and to give the website a better look and feel.

The home page, for instance, will be built around a regularly updated editorial calendar linked to current events, new products and services for members.

The website even will have a new URL: americanbar.org. (That address will redirect visitors to the existing website until the new design goes live.)

Though many visitors to the ABA website are from outside the legal profession, the first priority is to “maximize the site as a member benefit,” says Clifford, principal partner at Clifford Law Offices in Chicago. “It has to be responsive to members.” Currently, the ABA site averages more than 568,000 visits a month.

Improving the website is an important aspect of the ABA’s larger effort to enhance the value of membership for lawyers. A year ago, the House of Delegates cut annual dues for sole practitioners by up to 50 percent; and it reduced dues paid by government lawyers, judges and legal services lawyers by up to 25 percent. Annual dues for these members, including solos, now top out at $225. In addition, the association is looking at ways to improve its CLE offerings and bolster its publishing program.

“Today, lots of people interact with entities through their websites,” says Patricia Lee Refo, a partner at Snell & Wilmer in Phoenix who chairs the Standing Committee on Membership. “Clearly it’s important that we have a dynamic and user-friendly website to show to the lawyers of America.”

ABA President Stephen N. Zack shares that view. “Our ABA website is the front door to our association,” says Zack, who is administrative partner in the Miami office of Boies, Schiller & Flexner. “For every lawyer, fast, timely electronic access to information and services is key. The new website will help users get what they need, when they need it, in a smarter, simpler design.”

THE JOY OF STRESS

Clifford credits Zack with putting the website project on a fast track. When Zack became ABA president in August, he announced that the rollout of the redesigned site would occur in early February.

“Is it an aggressive deadline? Sure,” says Clifford. “Has it stressed out a lot of people? Yes. But is it a good thing? I think so.”

Clifford notes that visitors to americanbar.org in February will see the first phase of the website redesign rather than a finished product. The new site “is a living, breathing entity now,” he says. “This will be an ongoing process.”

And it’s a challenging process for an organization with so many moving parts. The ABA encompasses some 2,200 official entities, and some of them have tended to go their own ways in terms of website content and format.

One important aspect of the website project has been to replace that balkanized approach with more consistency. “This project has shown me the need for a more uniform approach exists,” says Clifford, a past chair of the Section of Litigation. “The stakeholders must come to grips that on some aspects we’re a nation of one rather than a federation of semi-autonomous groups.”