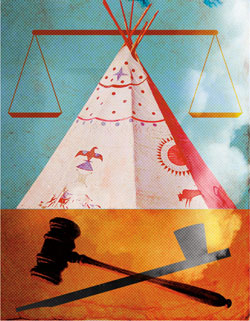 One of the notable trends in the legal ethics field over the past several years has been a gradual movement toward more uniformity in the substance and application of professional conduct rules.

There is little, if any, expectation that the states will fall into complete lockstep on how they apply ethics principles for lawyers and judges, or how they structure their disciplinary systems. But the ABA’s Model Rules of Professional Conduct and Model Code of Judicial Conduct have served as starting points for efforts to bring more uniformity to the field. The Model Rules, for instance, have been adopted in some form by every state except California.

But in Indian country — the lands occupied by more than 600 tribes recognized by the U.S. government as sovereign entities — that trend hasn’t caught on. And experts say it is unlikely that there will be much uniformity any time soon in the way that tribal courts address ethics and discipline issues for lawyers and judges.

“Tribes are all over the place on this,” says B.J. Jones, director of the Tribal Judicial Institute in the Northern Plains Indian Law Center at the University of North Dakota in Grand Forks. “A lot of them do use the ABA Model Rules,” says Jones, who serves as chief judge for the Sisseton-Wahpeton Oyate and chief justice for the Turtle Mountain Band of Chippewa Indians, and is admitted to practice in a number of tribal courts. But, he says, “It’s hard to gauge what the most prevailing form of discipline is.”

The somewhat random pattern of ethics rules for lawyers and judges in Indian country reflects the nature of general rules and procedures in tribal courts, says W. Gregory Guedel, who chairs the Native American Concerns Committee in the ABA Section of Individual Rights and Responsibilities, and other practitioners in the field.

“The thing that makes it both interesting, complex and a little maddening at times is that every tribe’s system is different,” says Guedel, chairs the Native American Legal Services Group at Foster Pepper in Seattle. “Some tribes have extremely well-developed legal codes and court procedures that are as intricate and broad as any non-tribal system. Other jurisdictions have just adopted the federal code or whatever is available because they won’t have the resources.”

Tribal jurisdictions vary greatly, says Paul Stenzel, an attorney in Shorewood, Wis., outside Milwaukee, who represents a number of tribes. “Some are handling a complete range of topics and cases that you would see in a state court, almost, with the exception of major felonies,” he says. “Smaller ones are doing very narrow dockets, maybe only hunting and fishing violations, maybe only adoptions or family law. And there’s everything in between.”

Increasingly, there are good reasons for tribal courts to firm up conduct codes for lawyers and judges, and to identify ethics issues on which a more uniform approach might be beneficial.

Some of that impetus should come from passage of the Tribal Law and Order Act of 2010 (PDF), which President Barack Obama signed into law on July 29. The act gives tribal courts and police more authority to deal with crimes committed in Indian country, and promises more federal money to help bolster tribal justice systems.

“The act gave a lot of people the thought that, ‘Let’s not stop there. Let’s continue and see what else we need to do,’ ” says Guedel. “There’s a lot of discussion in general about it.”

Economic considerations are another reason for tribal courts to take a harder look at their ethics rules for lawyers and judges. As some tribes have gained wealth — often in the form of casino revenue — their financial operations have become more complex and their commercial dealings with outside entities have grown.

“Private businesses are very afraid of the notion of a tribal court,” Guedel says. “Tribes have recognized that impression and have been trying to say, ‘This is a legitimate system. This is not just a kangaroo court.’ The adoption of the model codes in wide usage, which people understand inside and outside the tribal context, would be helpful in that regard. You would have a level playing field. A business that’s considering doing business with a particular tribe would say, ‘At least we’ve got an understandable way to resolve our differences.’ “

And there have been steps in that direction.

Last year, George A. Kuhlman, lead senior counsel and ethics counsel in the ABA Center for Professional Responsibility, met informally with court representatives from tribes in Wisconsin to discuss the process of developing ethics rules for lawyers and judges. But Kuhlman emphasizes that the center’s primary role is to provide information and assistance to jurisdictions looking at their own rules, rather than to actively push for adoption of provisions in the ABA’s model conduct codes for lawyers and judges. Kuhlman says his message is, “If the ABA’s rules would be useful for you, ask me if I can explain anything.”

The center’s sample code takes into account certain characteristics of tribal courts that don’t factor into the model code. Tribal courts, for instance, are more likely to have non-attorney judges. In addition, close-knit relationships within a tribe might require different types of rules regarding acceptance of gifts by judges and their family members — although cultural taboos against refusing gifts also must be taken into account. Mediation techniques might be more persistently followed in some settings, such as Navajo peace-making courts.

Whether to prohibit ex parte communications with judges could raise particularly difficult issues in close-knit Indian communities where judges are looked to as community pillars in the broader sense, says Jones. Judicial conduct rules, including the ABA model code, generally prohibit ex parte communications. “A lot of tribes don’t strictly adhere to those rules,” says Jones. “The tribal judge is more than an arbitrator of disputes. You’ve got to be actively involved in the community.”

An important element of the sample code is that it is designed to encourage tribal courts to tweak it as much as they want, says Christine Folsom-Smith, a program attorney at the National Tribal Judicial Center.

“You never want your tribal courts to come in and do what a lot of them do, and take a code and just substitute whatever the state [name] is with the tribe’s name,” she says. “It’s not necessarily going to capture the intricacies of the cultural relationships. We just try to get the information out there so people can have a look at it. We try not to tell people what to do here.”

Folsom-Smith says that, by and large, tribal judges have reacted positively to the sample code. “They like having that certainty that a code of ethics lends, especially if they happen to be the presiding judge,” she says. “They like to have a document they can turn to if things are not working properly. But they also want it to reflect what their values are, from their community.”

Others in the field agree that tribal courts should seek to develop legal ethics rules that reflect priorities of their communities.

“The biggest concern will always be, ‘Does this proposed set of rules infringe on the tribe’s sovereignty?” says Guedel. “That is what they protect first and foremost in any regard with their legal system. They don’t want to open the door to people being able to say, ‘You don’t have the ability to do this anymore. We can come in and do this and that.’ “

Robert O. Saunooke, an attorney in Cherokee, N.C., who chairs the Tribal Courts Council of the ABA’s Judicial Division, says an all-or-nothing approach to the ABA Model Rules of Professional Conduct and Model Code of Judicial Conduct would never work in Indian country.

“The problem would come in trying to cookie-cutter a set of rules that could be adopted by 620 tribes,” he says. “But there’s some uniformity that would be beneficial-continuities to pleadings and procedures that would give confidence to off-reservation and on-reservation litigants.”

The end results should help tribes create credible legal systems, says Guedel. “Helping tribes create a judicial system that’s recognized as legitimate and where people can expect fairness and professional conduct will be very beneficial to tribes, and I think they recognize that,” he says.