End of Round Two: Progress in Raising Awareness About Funding Crisis in State Courts 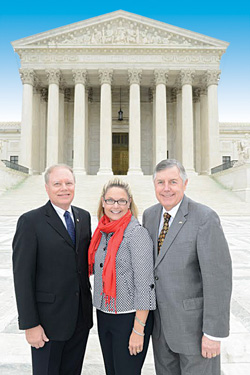 Two years after the ABA joined with other groups to put the funding crisis facing state court systems into sharp focus, a solution still is a long way off.

Nevertheless, there are important signs that the court funding issue is starting to get the attention necessary to produce solutions, says Wm. T. (Bill) Robinson III, the association’s outgoing president.

At the start of his term in August 2011, says Robinson, “I made it clear that the year wouldn’t be about me or any individuals, but the crisis of underfunding for the courts, an issue that will take years to address. We knew that going in.”

Robinson’s term as ABA president officially will end at the close of the association’s 2012 annual meeting, which is being held in Chicago Aug. 2-7. Robinson will be succeeded by Laurel G. Bellows, managing partner at the Bellows Law Group in Chicago.

The court funding crisis is yet another byproduct of the Great Recession that hit the United States in late 2007. But while the recession technically has ended, courts continue to feel the pinch as their budgets are trimmed—and in some cases hacked—by cash-strapped legislatures trying to make ends meet. According to the National Center for State Courts, 47 states have experienced funding reductions since 2010, and most states already allocate less than 2 percent of their budgets for the courts. The cuts have resulted in widespread service reductions by the courts, including reduced operating hours in some jurisdictions.

It was in 2010 that then-ABA President Stephen N. Zack put the court funding issue on the association’s front burner when he created the Task Force on Preservation of the Justice System. Zack is administrative partner in the Miami office of Boies, Schiller & Flexner. At the end of Zack’s term last August, the association’s policymaking House of Delegates adopted a resolution supporting several strategies for building support for measures to ensure adequate funding for the courts.

If anything, Robinson, the member-in-charge of the Florence, Ky., office of Frost Brown Todd, has upped the ante even further. Barely a month after he took office, Robinson’s legal alma mater, the University of Kentucky in Lexington, sponsored a symposium in his honor that focused on the financial crisis facing the courts. Speakers at the symposium emphasized the importance of building coalitions in support of the courts.

“The issue merits a long-term commitment by the association,” says Robinson. “We rang a bell to get attention. We have gradually achieved more media attention on this issue. We’re simply laying the foundation for efforts in the coming years.”

Bill Robinson (fourth from left) with other attendees at last year’s court funding symposium at the University of Kentucky. ©Lisa Helfert

MONEY IS THE MEASURE

Raising awareness of the issue is a vital step, Robinson says. “The courts are essential to constitutional democracy, which we know is the key to freedom in this country,” he says. “But some of our fellow citizens don’t recognize what our courts do and what our courts mean to freedom in our country. So it’s our job to reach out and increase that understanding. This is not a lawyer issue, not a judge issue—it’s a public issue of significant policy proportions.”

Robinson notes that he is aware of no editorials published by major newspapers or other publications that oppose efforts to bolster funding for the courts. “That’s encouraging,” he says.

Robinson is also encouraged that Bellows, along with James R. Silkenat, who becomes ABA president in 2013, and William C. Hubbard, who is running unopposed to become president in 2014, have made a commitment to continue focusing on the court funding issue. (Silkenat is a partner at Sullivan & Worcester in New York City, and Hubbard is a partner at Nelson Mullins Riley & Scarborough in Columbia, S.C.)

Funding the Legal Services Corp. at adequate levels is another priority that Robinson has emphasized during the past year. Current funding from Congress for the LSC, which supports local offices around the country providing civil legal services for the poor, stands at $348 million. The ABA is urging Congress to fund the LSC at $402 million for federal fiscal year 2013, the same amount requested by President Barack Obama. But many legislators, especially in the House of Representatives, have balked at those numbers.

Robinson, who says more than half of people applying for LSC-funded legal services are being turned away, acknowledges that “there are government cuts everywhere. But many legislators don’t appreciate the importance of the role of justice for the quality of life in this country.” Robinson and bar leaders from all 50 states who gathered in April for ABA Day in Washington urged members of Congress to increase funding for the LSC.

Ultimately, says Robinson, the success of the ABA—along with groups including the U.S. Chamber of Commerce, the National Center for State Courts, and state and local bar associations—to advocate for the courts will be measured on the basis of two factors: a reversal of the trend toward cutting funding for the courts, and actions by state legislatures to increase court budgets.

“More money for the courts is really the only issue that counts,” Robinson says. “There is really no other way to measure progress on the issue other than that.”