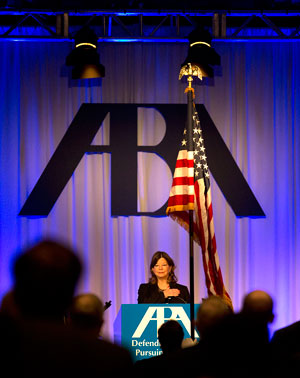 Association members salute the national colors during the opening ceremonies of the House of Delegates. Photos By Earnie Grafton.

Efforts to strengthen the ethics rule sanctioning discrimination and harassment as related to the practice of law received criticism in one area during a public hearing at the 2016 ABA Midyear Meeting in San Diego—that the measure was not broad enough.

The ABA Standing Committee on Ethics and Professional Responsibility wants to add provisions that would make it misconduct for lawyers to knowingly discriminate or engage in harassment in conduct related to the practice of law.

The panel’s work received generally positive reviews from about a dozen speakers who testified. But nearly every speaker, including ABA President Paulette Brown, urged the committee to make further changes in its proposal to give it even broader effect.

The committee, which has primary responsibility for revising and interpreting the ABA Model Rules of Professional Conduct, issued its draft proposal to amend Model Rule 8.4 on Dec. 22. The committee accepted written comments through March 11, and it plans to submit a final proposal for consideration at the ABA Annual Meeting in San Francisco this August.

Model Rule 8.4 addresses bias or prejudice in a comment to the black-letter rule that states: “A lawyer who, in the course of representing a client, knowingly manifests by words or conduct, bias or prejudice based upon race, sex, religion, national origin, disability, age, sexual orientation or socioeconomic status,” is in violation “when such actions are prejudicial to the administration of justice.”

But the language raised concerns for several ABA entities because comments may not be enforced in the same way as black-letter rules, and because the language is not broad enough to adequately address discriminatory behavior by lawyers in the context of law practice.

“By addressing this issue in a comment, however, the compromise did not make manifestations of bias or prejudice such as discrimination or harassment a separate and direct violation of the Model Rules,” states the committee’s memorandum accompanying its proposed amendments. The committee’s proposal “moves beyond the comment to craft a distinct rule within the black letter of the Model Rules of Professional Conduct prohibiting lawyers from engaging in harassment and knowing discrimination in conduct related to the practice of law” against people on the basis of race, sex, religion, national origin, ethnicity, disability, age, sexual orientation, gender identity, marital status or socioeconomic status. A revised comment states that the prohibition would apply “to conduct related to a lawyer’s practice of law, including the operation and management of a law firm or practice.”

The ethics committee’s review of Model Rule 8.4 was prompted by a letter it received in May 2014 from the ABA’s Goal III commissions: the Commission on Women in the Profession; the Center for Racial and Ethnic Diversity; the Commission on Disability Rights; and the Commission on Sexual Orientation and Gender Identity. (Goal III states the ABA’s commitment to eliminating bias and enhancing diversity.) In the letter those commissions urged the committee to consider amending the Model Rules to address issues of harassment and discrimination more effectively.

It was primarily representatives of those commissions whom the ethics committee heard from at the public hearing, and the consensus message was that the committee should give amended Rule 8.4 even more and sharper teeth. 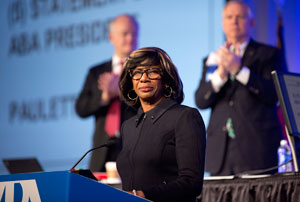 But one problem with the proposed amendments, she said, is that applying the prohibition to lawyers who “knowingly” discriminate may undercut its application in many cases. “Some have objected to the inclusion of ‘knowingly,’ ” she said, “and I’m troubled by its inclusion in the rule.”

Brown also urged the committee to add gender expression to the list of attributes that would be protected under the rule.

Other speakers who echoed Brown’s concerns also said the proposed amendments fail to define the practice of law in a way that would encompass incidents in the context of nonprofessional activities at law firms, such as receptions, dinners and informal social events.

These are the types of events where much of the harassment of or discrimination against female lawyers occurs, several speakers said.

“The impediments to women of bringing discrimination claims against their firms to court are great,” said Wendi S. Lazar, a partner at Outten & Golden in New York City who testified on behalf of the women’s commission. For that reason, she said, expanding the application of Model Rule 8.4 to social settings “is absolutely critical and crucial to retaining women in the profession.”

In closing comments, ethics committee chair and Arizona State University law professor Myles V. Lynk said, “The comments will inform us as we give further consideration to the proposed language. This was something that wasn’t on our radar. But it clearly needs to be on our radar—and on the radar of the entire association.”

Later, the ABA’s House of Delegates easily adopted a resolution encouraging programs on diversity and inclusion in the legal profession as part of mandatory or minimum continuing legal education requirements. Resolution 107 asks licensing and regulatory authorities that require MCLE to make diversity and inclusion programs a separate credit, but without increasing the total number of hours required.

Lorelei Laird contributed to this report.

This article originally appeared in the April 2016 issue of the ABA Journal with this headline: “Bolstering the Bias Rule: Ethics proposal needs more teeth, speakers say.”