Everything on the Table: LSC Looks to ABA to Help Meet Legal Needs of the Poor 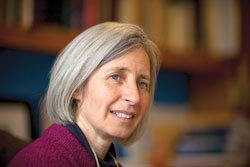 Martha Minow: “There is a mismatch between the existing pool of people with legal training and the large group of people who need legal services. Photo courtesy of Harvard Law School.

The cutbacks in federal funding for the Legal Services Corp. in fiscal 2012 that were adopted by Congress in November are likely to deal a heavy blow to efforts to meet the civil legal needs of the nation’s poor.

The action by Congress continued a disheartening trend for the LSC, which distributes federal grants to 136 independent nonprofit legal aid programs with more than 900 offices throughout the United States and its territories. Congressional funding for these grants has been on a steady decline for several years. On Nov. 17, Congress slashed funding for the LSC by $56 million, or about 15 percent. That puts the corporation’s 2012 budget at $348 million, with $322.4 million slated to fund grants to local programs. The LSC’s 2011 budget was $404.2 million. Federal funding for the LSC peaked at nearly $771 million in the early 1980s.

The ABA and other LSC advocates say the new cuts in federal funding come at a time when the nation’s legal services delivery system already is unable to meet the needs of Americans living near the poverty line. Studies indicate that some 80 percent of those needs are unmet.

“Funding provided through the Legal Services Corp. is the only way millions of Americans can bring their civil cases—child support and custody decisions, foreclosures and veterans’ benefit disputes, for example—to court,” said ABA President Wm. T. (Bill) Robinson III in a statement issued shortly after Congress acted on Nov. 17.

“Congress must weigh the need to shrink our nation’s burgeoning bud get deficit against the fundamental need of low-income citizens to access our justice system,” said Robin son, the member in charge of the Florence, Ky., office of Frost Brown Todd. He pledged that the ABA “will work diligently with Congress to seek restoration of the lost and desperately needed funding in a future budget year.”

The LSC already was preoccupied with the bleak outlook for legal services delivery to the poor even before Congress imposed the funding cuts. And when the LSC’s board of directors met in October at the ABA’s Chicago headquarters, some of its members indicated that the corporation will look to the ABA to help explore new strategies for meeting the legal needs of the poor.

“The LSC and the ABA have a rich history and a very strong relationship,” said James J. Sandman, the corporation’s president, “but increased collaboration with everybody involved in the pursuit of access to justice is critically important now. We have to leverage all of the resources we have.”

LSC board members touched on a number of possibilities during an open discussion with several ABA representatives, although none of them amounted to formal requests for action by the ABA. Among the topics addressed were widespread access to enhanced technology, more collaboration between legal service providers to reduce duplicated efforts and maximize resources, and the role of law students in providing pro bono services.

Finding a way to maximize pro bono services by lawyers should be a key part of these efforts, said Harvard Law School Dean Martha L. Minow, who is vice chair of the LSC board.

“There is a mismatch between the existing pool of people with legal training and the large group of people who need legal services,” Minow said. “We are missing both the funding mechanism to support lawyers who want to provide the services for low-income people and the organizing platform for those who want to do so on a volunteer basis.”

One possible action board members suggested at the meeting was to increase participation by law students in pro bono activities that go beyond the boundaries of clinic programs already offered at most schools.

ABA representatives agreed that such an approach has promise for students as well as clients. “Legal aid work can provide valuable work experience for law students and recent graduates,” said Robert E. Stein of Washington, D.C., who chairs the ABA Standing Committee on Legal Aid and Indigent Defendants.

“Legal aid lawyers do everything, when people in large law firms may only do one piece of a case,” Stein said. “For a lawyer who wants a more complete experience, legal aid work is really a very good way to do that.”

LOOKING AT ALL AVENUES

While most of the ideas floated at the meeting picked up on efforts already under way, one notion has the potential to raise sensitive issues for the entire regulatory structure for lawyers in the United States. That is the question of whether nonlawyers should be allowed to help bridge the gap between legal services needs and the current ability of the legal profession to meet them. Ethics rules developed by the ABA and the states reflect a strong commitment to the idea that legal services should be provided by licensed attorneys.

“Nonlawyers have an important role to play in the delivery of services to poor people,” Sandman said. “We could serve more people more effectively if nonlawyers had greater freedom to undertake tasks that really do not require a lawyer’s training.”

The reaction of the ABA contingent was cautious. “This is an issue that is far broader than legal services and legal aid for the poor,” Stein said. “It’s a more general question that the ABA should address, and should be examined as part of a more general approach to how lawyers should work with nonlawyers.”

The LSC board’s Pro Bono Task Force is expected to issue its first report in the spring. Minow, who chairs the task force, said the report will explore all avenues of best practices and innovations that could help boost civil legal assistance by private lawyers to low-income Americans.

“I don’t have an agenda,” she said. “We just have a problem. The existing structures don’t work. This is a time of urgency.”

Meanwhile, U.S. Attorney General Eric Holder added further impetus to the push for lawyers to engage in more pro bono work when he addressed the ABA’s National Pro Bono Summit in late October. Holder called on the legal profession to fight to eliminate barriers to pro bono work and look for innovative ways to provide those services.

“The obligation of pro bono service,” Holder said, “must become part of the DNA of both the legal profession and every lawyer.”