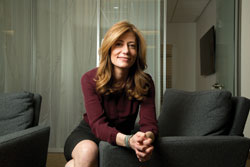 If you had the chance to reform the criminal justice system—and money was no object—what would you do? Where would you start? And how would you measure your success?

These questions aren’t part of a parlor game. They’re the actual issues that faced former New Jersey Attorney General Anne Milgram when she started her new job as the first vice president of criminal justice at the Laura and John Arnold Foundation. The foundation is a small, private philanthropic group established in 2008 by Houston hedge fund billionaire John Arnold and his lawyer wife, Laura, to promote advances in critical areas like education, medicine and law.

Milgram’s initial mission: “To look at the entire criminal justice system and identify the areas with the greatest need and the greatest opportunity for reform and structural change,” she says.

And then actually do it.

Laura Arnold knew Milgram was the right person to accomplish even more. “We wanted someone who had the exposure to enough areas of the pipeline—someone who had the gravitas, the intellect and the ability to step back and understand the best place to make changes,” Arnold says. “We look for stars, and she’s a star.”

Although Milgram already had a job—she is also an adjunct professor at New York University School of Law—she quickly decided to join the team. “Having the keys to the car to drive change, I couldn’t pass it up.”

But where to start? Milgram and her team created matrices, wrote outlines on white boards, crunched numbers, created categories and asked big questions like: “Who gets arrested? Who gets charged?” And “Who’s in jail and why?”

The results helped them home in on a defined target: the pretrial process. This stage of the justice system, Milgram says, contains two basic system errors. The first is that a large number of low-level, nonviolent offenders remain incarcerated despite the likelihood that, if released, they’d return to court when required and would not re-offend. The second is that high-risk, violent offenders are getting released.

“Although that second group of people is quite small, 5 percent, it’s big when you address the system’s responsibility to keep it fair and keep you safe.” Now a little more than two years in, Milgram and her five-person team just may be on the cusp of making that transformative change.

They’ve developed a Web-based tool called the public safety assessment to assist courts in the pretrial determination of whether a defendant stays in jail or gets released from custody.

The assessment uses nine factors to predict three things: a defendant’s likelihood of rearrest; whether the defendant, if released, will commit a violent act; and a released defendant’s probability of showing up for the next court date. The tool incorporates the analysis of more than 1.5 million cases and accurately predicts across all areas, Milgram says.

Milgram was surprised that this type of tool didn’t already exist. She estimates that only 10 percent of the jurisdictions she studied had any sort of evaluation tool in use, regardless of efficacy. The tool is currently in use statewide in Kentucky, and Milgram says agreements for two other pilot sites are in the works. She and the team are also working on a similar tool for DAs.

She’s also rolling out a user-friendly, multilingual witness identification iPad app for police officers to use with witnesses to make reporting easier. And there’s a program in beta testing that robocalls and texts defendants to notify them of upcoming court dates. (No-shows get another round of robocalls and texts as a heads-up about their just-issued arrest warrants.) And that’s just the beginning.

“These are huge issues that need to be fixed, to be changed,” Milgram says. “To have this sort of backing and the funding to do it, it’s an unbelievable gift.”

This article originally appeared in the November 2013 issue of the ABA Journal with this headline: “Prison Break: Backed by Texas billions, former New Jersey AG crafts innovative ways to ensure justice for all.”