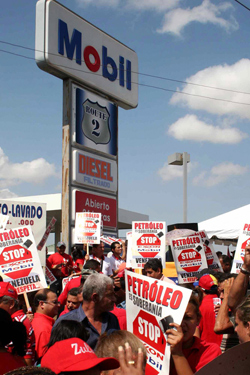 Exxon Mobil Corp. has been involved in some pretty big lawsuits. The oil giant has been regularly painted as the bad guy in connection with events like the 1989 Exxon Valdez oil spill off the Alaskan coast and states’ claims that it has stolen billions of dollars in mineral rights without proper compensation.

But now the world’s largest publicly traded company is playing the role of sympathetic victim and plaintiff. And some legal experts say that Exxon Mobil is fighting a legal war that, if it wins, could dramatically enhance and preserve the global rule of law.

The case, Exxon Mobil v. Petroleos de Venezuela SA, is being tried before a secretive international judicial tribunal that even many arbitration insiders have never heard of. If Exxon Mobil emerges victorious in its claim of more than $7 billion, it will be one of the largest single judgments ever issued through the international arbitration process.

Lawyers following the case say it could significantly affect dozens of other similar claims seeking tens of billions of dollars more, including the $4.5 billion claim ConocoPhillips also has against Venezuela.

Most important is that the case’s outcome is likely to influence decisions by hundreds of the world’s leading corporations considering whether they should invest hundreds of billions of dollars in developing countries, says Timothy Tyler, a director and professor at the University of Texas School of Law’s Center on Global Energy, International Arbitration and the Environment.

“In the world of international arbitration and global investment risk, this case is huge,” says Tyler, who has been closely monitoring the developments in the Exxon Mobil case.

These oil companies were offered dimes on the dollar for their investments. Several cash-strapped companies took the deal.

Exxon Mobil and ConocoPhillips rejected the offer and demanded full compensation. That’s when Chavez ordered the companies’ assets fully nationalized. He has since expropriated the assets of the metals, cement, food and utilities industries.

PDVSA has argued that any legal disputes over its government’s actions needed to be handled by the courts in Venezuela.

A ‘BIT’ OF PROTECTION

In 2005, before Chavez began his expropriations, Exxon quietly restructured its Venezuela assets through a Dutch holding company. So Exxon responded to Chavez by filing a claim with an international tribunal seeking full payment under a “bilateral investment treaty” signed between Venezuela and the Netherlands.

BITs are a complex network of international treaties in which each sovereign promises to protect the other sovereign’s investors from bad or illegal acts by that government, including expropriation without compensation.

“The BITs also provide for arbitration outside the host state, to prevent hometown justice,” Tyler says. “The network is vast. A 2008 tally counted almost 2,700 BITs.”

On June 10, 2010, the International Centre for Settlement of Investment Disputes, an arbitration panel aligned with the World Bank, ruled that it had jurisdiction over the dispute and rejected Venezuela’s complaint that Exxon Mobil abused the treaty system by restructuring its holdings in the Netherlands.

Andrea Bjorklund, a law professor at the University of California at Davis and an expert on international arbitration, says while one arbitration finding is not binding on other pending matters, the Exxon Mobil case will likely influence dozens of others against Venezuela.

“There is something we call ‘de facto precedent,’ ” says Bjorklund. “There is no way that other arbitrators on other panels won’t look at what the ICSID did in the Exxon decision on jurisdiction.”

The three-judge arbitration panel is now considering the issue of damages.

“Every country has a sovereign right to do what it wants with its own land, including nationalizing private assets,” Ali says. “But there are also legal consequences for taking those actions.” Ali compares it to a city or state needing to seize and condemn private property in order to build an airport or highway, but having the responsibility to compensate those property owners for the loss of their land.

Ali says the Exxon Mobil case will proceed much like a typical trial. The same arbitration panel that handled the jurisdiction issues will now decide liability and damages. Both sides will file thousands of pages of documents, witness statements and expert testimony. That will be followed by actual hearings, which are likely to include cross-examination of witnesses and oral arguments. A decision is not expected until late this year or next.

The biggest question, according to Bjorklund, is whether Venezuela will pay the $7 billion if ordered to do so.

“Venezuela has expressed doubts about the legitimacy of the ICSID’s jurisdiction, but I think the fact that Venezuela has participated in the process so far indicates that they are reluctantly planning to abide by the decision,” Bjorklund says. “If they don’t pay voluntarily, the ICSID convention states that all 140 nations treat the award as a final judgment.”

Bjorklund says assets not used specifically for government purposes could be seized to satisfy the judgment.

“On the down side, as of 2008, there were 48 cases against Argentina based on that country’s measures in response to its 2001 economic crisis. Awards in the hundreds of millions of dollars are outstanding,” says Loftis. “But Argentina has steadfastly refused to pay. On the other hand, the Czech government paid $355 million—the equivalent of that country’s annual public health budget—when it lost an arbitration over a TV license brought by U.S. cosmetics heir Ronald Lauder.

Loftis says the developing nations that refuse to abide by international arbitration decisions will be viewed as high risk, causing outside investment to possibly dry up and go away. And these are the nations where the people would benefit most from such investments.

“If years of arbitration yield judgments suitable only for framing, foreign investor protection will be set back years,” Loftis says. “The cost of investing in a country is affected by political risk. Less political risk, lower investment costs. A key measure of a state’s political risk is its track record of payment.”