F. Lee Bailey loses his quest to practice law again after past misdeeds 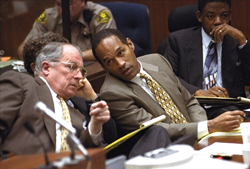 F. Lee Bailey has enjoyed one of the most successful—and sensational—careers in modern American criminal law. In 1961, less than a year out of law school, Bailey became lead attorney for Sam Sheppard, an Ohio doctor convicted in 1954 of murdering his wife. A lengthy appeals process culminated in Bailey's successful argument before the U.S. Supreme Court in 1966 that Sheppard had been denied due process at trial. A new trial resulted in a not-guilty verdict.

From there, Bailey went on to represent defendants in some of the most notorious criminal cases of the past 50 years. As a member of the defense team for O.J. Simpson in his trial for the murder of his ex-wife and her friend Ronald Goldman, Bailey's devastating cross-examination of Los Angeles police officer Mark Fuhrman was credited with being a crucial factor behind Simpson's acquittal.

But one of Bailey's cases also led to his downfall. He was disbarred in Florida, and in the state and federal courts of Massachusetts. Earlier this year, Bailey's effort to gain admission to practice law in Maine was rejected by that state's high court.

REMORSE IS IN THE RECORD

Bailey, still active at 81, spends time tending to various business affairs from his office in Yarmouth, a small town on the Maine coast just north of Portland. He yearns to practice law again, but he recognizes that's unlikely to happen.

"I was very disappointed, but I'm afraid I saw it coming," Bailey said during an interview with the ABA Journal after the Maine Supreme Judicial Court issued its ruling on April 10. "After 60 years as an attorney, I've learned how to read people and read their expressions, particularly from looking at their eyes. The only thing I could have done further would be to admit some form of guilt which I don't think I was guilty of. My remorse for what I did is in the record."

Bailey suggested that a career spent representing defendants in a long string of high-profile cases may have undermined his efforts to return to law practice. "I think it hurt in Florida, Massachusetts and in Maine," he said. "There has been a strong wave of judicial resentment against me for my role in the O.J. Simpson trial—tearing up a racist cop. I am convinced that it has had a major impact on me."

Ruling in F. Lee Bailey v. Board of Bar Examiners (PDF), the Maine Supreme Judicial Court indicated that Bailey's view of the process was a key factor in its decision to reject his petition for a license to practice. By suggesting there was a "conspiracy to deprive him of his constitutional rights, Bailey minimizes the wrongfulness and seriousness of the misconduct for which he was disbarred," wrote Justice Jon D. Levy in his majority opinion.

Bailey's problems began in 1994, while proceedings in the Simpson case were still going on, when he took on the defense of Claude Duboc against charges of drug smuggling and money laundering. In a plea bargain negotiated by Bailey, Duboc agreed to plead guilty to the charges and transfer all his assets, including more than 600,000 shares in a company called BioChem Pharma, to the federal government. But Bailey retained control over the stock and used the proceeds after selling some shares for his own purposes. When he was unable to turn the stock over to the government, he was sent to prison for contempt and held for 44 days until he was finally able to turn over the stock.

In 2001, the Florida Supreme Court ordered that Bailey be disbarred in the state for his misconduct in representing Duboc, with eligibility to seek reinstatement after five years, on grounds of misappropriating and commingling client funds with personal assets; ex parte communication with a judge; self-dealing; conflict of interest; and false testimony under oath. That ruling led to reciprocal disbarment by the state and federal courts of Massachusetts.

Bailey moved to Maine in 2010. Two years later, he passed the state's bar exam and applied for a license. In a hearing before the Maine Board of Bar Examiners, 22 witnesses testified on his behalf, including a Massachusetts judge (and former law partner) and several lawyers. But the board ruled 5-4 against him, determining that he did not show by clear and convincing evidence that he had the necessary good fitness and character to practice law.

"The board found, among other things, that Bailey did not recognize the wrongfulness and seriousness of his prior misconduct that led to his disbarment, that he continued to dispute the Florida Supreme Court's findings regarding his misconduct, and that he continued to challenge the legitimacy of the judicial process that resulted in his disbarment," stated the Maine Supreme Judicial Court in its later ruling.

Bailey's appeal to the Maine court initially was heard by a single justice, Donald G. Alexander, who overturned the board's ruling after concluding that Bailey did possess the requisite good character and fitness necessary for admission to practice. The board then appealed to the full court, which ruled against Bailey 4-2 (Alexander did not participate).

The majority acknowledged that the array of character witnesses marshaled by Bailey for his board hearing "demonstrates the high regard in which Bailey is held by many of his professional peers, friends and business associates, and underscores his advanced skills as a legal advocate." The majority found, however, that "considered as a whole, the record evidence was insufficient to prove ... that Bailey recognizes the wrongfulness and seriousness of his misconduct."

In a dissent, Chief Justice Leigh I. Saufley and Justice Robert W. Clifford contended that the majority should have deferred to the findings of Justice Alexander regarding Bailey's credibility, since he was the only member of the court to hear direct testimony. In making credibility determinations of its own, the majority failed to apply proper standards of judicial review, the dissenters stated.

"The dissent has an excellent point," says Peter A. Joy, a professor who teaches ethics at Washington University School of Law in St. Louis. "The guiding principle of appellate review is to give deference to a lower court or agency, and unless testimony is inherently incredible, an appellate court should not substitute its judgment for the fact finder's judgment." The Maine court's application of the "clear and convincing standard" is consistent with rulings on disbarment cases by courts in most other states, says Keith Swisher, a professor at Arizona Summit Law School in Phoenix.

Stephen Gillers, a professor at New York University School of Law, says, "What the state is asking is: 'Why should we take a chance on you after what you have done?' "

For Bailey, the quest to practice law again is likely over: "As James Bond said, 'Never say never again,' but I don't have much enthusiasm to do so in the near future. I think I'll just let it ride. I might write a book about this whole experience."

• Read the decision of the Maine Supreme Judicial Court in Bailey v. Board of Bar Examiners (PDF).


This article originally appeared in the December 2014 issue of the ABA Journal with this headline: "A Long Fall: In a futile effort to practice law again, F. Lee Bailey loses his last big case."