Musicians Chafe at Politicians' Misappropriations of Their Work 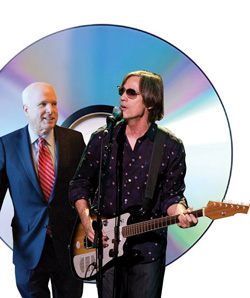 The 2010 midterm election may be a distant memory for most, but not for former Florida Governor Charlie Crist.

The erstwhile U.S. Senate candidate has found himself embroiled in litigation with Talking Heads’ front man David Byrne after the group’s song “Road to Nowhere” was used in a Crist campaign video posted on YouTube. Crist blamed an outside consultant and denied intentionally infringing on the group’s copyright.

Crist’s legal problems are not unique.

In 1984, Bruce Springsteen made headlines when he objected to President Ronald Reagan’s use of his hit “Born in the U.S.A.” as an anthem for his re-election campaign. The rock icon accused Reagan of subverting the true meaning of the song and playing it at rallies without his consent.

Those were the good old days, when an artist’s biggest campaign concern was a candidate using their tunes to pump up the crowd (permitted with a blanket performance license) But times, they are a-changing, and the proliferation of viral videos, YouTube, and Facebook has opened a Pandora’s box of copyright problems for politicians seeking pop-culture cred.

“For a few hundred dollars worth of equipment you can create a video, put it on the internet, and it creates a lot of potential for trouble,” says Ben Sheffner, a Los Angeles attorney who writes the blog “Copyrights and Campaigns”.

Sheffner is talking from experience. He spent a significant part of his career working on political campaigns, including serving as special counsel for Senator John McCain’s presidential bid. During that time, Jackson Browne sued McCain over the use of his hit “Running on Empty” in a campaign video produced by the Ohio Republican Party. Browne’s 2008 complaint claimed copyright infringement for unlicensed use of the song. McCain disavowed knowledge of the infringement, but settled the case in 2009, and issued an apology. Interestingly, Browne wasn’t the first to take exception to the senator’s liberal use of copyrighted music. Artists including John Mellencamp, Van Halen and Orleans also complained about McCain’s camp co-opting their tunes without their consent.

The complaints, both verbal and legal, aren’t without political overtones. Most of the artists are self-proclaimed Democrats; nearly all of the defendants are Republicans. But musicians say it’s not just about the politics - that the unauthorized use of their music constitutes a taking that can affect their bottom line.

“What’s often lost in these discussions is, the artist has a First Amendment right not to associate themselves with a politician with whom they disagree,” says Jacqueline Charlesworth, a copyright attorney with Pryor Cashman in New York. “Artists get paid very well for the use of their songs… and can be negatively impacted if anyone can take a song and slap it on an ad.”

Charlesworth handled Don Henley’s April 2009 lawsuit against Charles DeVore, a Republican candidate for the U.S. Senate seat in California. DeVore posted two songs by the Eagle’s founding member on the Internet - “The Boys of Summer” and “All She Wants to Do is Dance” with re-written lyrics spoofing President Barack Obama, US Senator Barbara Boxer and Congresswoman Nancy Pelosi.

In June 2010, the Central District of California granted summary judgment in favor of Henley on his copyright claim, finding DeVore’s purpose was commercial, and didn’t meet the fair use exception. But the judge decided DeVore hadn’t violated the Lanham Act, because the public couldn’t reasonably believe Henley himself performed the spoofed songs. Henley v. DeVore also ended in a confidential settlement, but not before the candidate used the lawsuit to gain even more publicity.

“Campaigns are solely focused on winning and they’re not going to spend a lot of time consulting with copyright attorneys,” Sheffner says. “They’re going to create a video, throw it on the internet, and deal with the copyright consequences later.”