Family and the Far East 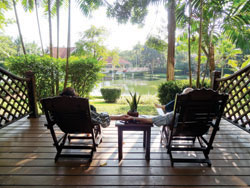 Jewel Kolling Basse had been to China before—to her father’s former village in Guangdong province and to the big cities, too, on professional tours related to her complex civil litigation practice as a San Francisco-based senior partner at Gordon & Rees, as well as to her years as an assistant district attorney in the city.

When daughter Brooke earned an anthropology degree from UCLA in May 2011, however, Basse and her husband, Ariel, decided it was time she experienced China, too. “We wanted to show her the places where we had been that we knew she’d enjoy,” Basse says, plus a few other cities, including Siem Reap in Cambodia, Bangkok and Tokyo.

They began in China with a six-day flurry of sightseeing. In Shanghai they took in the famed Bund waterfront area, visited restored city landmarks like the Fairmont Peace Hotel and whiled away an entire day at the Shanghai Museum. They even took Brooke to a little-known gem they knew would thrill the newly minted anthropologist: a spectacular scale model of urban Shanghai sprawling across the third floor of the Shanghai Urban Planning Exhibition Center. In Xian, Brooke reacted to the Terra Cotta Warriors the way her parents expected—with OMG after OMG.

Although the multicity itinerary followed the pace of a 20-something, Basse made sure she and her husband experienced enough parental pampering to come home rested and recharged. Luxury hotels like the Park Hyatt Shanghai were key to this strategy.

“I have worked very hard throughout my career, and litigation is very stressful,” Basse says. “I feel I deserve to travel in comfort.”

A well-crafted plan also helped, and Basse brought in expert Tony Zhao of China International Forest Travel Service to secure every detail well in advance. Zhao has planned all of her China trips, she says, and has become a friend. “He selects guides in every city, recommends hotels and even gets me the best rates,” she says. On this trip, Basse asked Zhao to secure younger, hipper English-speaking guides for Brooke, which he did with an added perk: The guide he arranged in Xian was able to get the entire family VIP access to Emperor Qin Shi Huang’s ceramic statues, allowing them a ground-level view of the warriors and horses.

Two days in Hong Kong was followed by two days in Siem Reap, where the family toured the epic Angkor Wat compound and trekked to jungle temples. A necessary luxury: overnights at the five-star Sofitel Angkor Phokeethra Golf & Spa Resort.

Unfortunately, the Basses couldn’t plan the weather. Flooding throughout Thailand forced them to forgo the four days they’d planned there. Luckily, they were able to put together an 11th-hour trip to Tokyo with a layover in Bangkok. Not surprisingly, they managed to squeeze in an extensive city tour, stops at several religious sites including the Reclining Buddha, a leisurely dinner with friends and a hotel catnap—all between the afternoon hours and 4 a.m., call time for the Tokyo flight.

There, Basse says, they did everything but eat sushi. They hit Tokyo Tower for the panoramic view, sealed prayers at the Meiji Shrine and strolled through the manicured grounds of the Imperial Palace East Gardens. Shifting from high culture to consumerism, they power-shopped from the trendy Harajuku district to the grand department stores Isetan and Mitsukoshi.

Everywhere they went, Basse was blown away by the cleanliness and formality of the city. Even the taxi drivers were in uniforms with white gloves, she marvels.

It was a fabulous ending to a trip so spectacular that it dominated the Basse family newsletter, contributing significantly to the sentiment shared in its closing paragraph: “We are so grateful for the many blessings bestowed on our family.”

• Time out of the office: Three weeks

• Time-off tip: Learn to let go. On every trip, Basse brings her iPhone to keep up with calls and email, but she’s careful not to overdo it: “I have a great team, and I trust them.” Early in her career, when she was an ADA, she says, she ruined a romantic trip to Hawaii by fretting over a case slated to be her first felony jury trial. “I spent the entire vacation in my villa thinking of ways I could get a conviction,” she recalls. “When I got home, my supervisor said, ‘We need to dismiss the case.’ ”

• Important to bring: Small bills for tipping. This goes along with respecting the service people you encounter, from the baggage handlers to tour guides and wait staff (except in Japan, where tipping can be an insult).

• Traveling tip: Pack light. Basse never checks a bag; instead, she power-packs with a travel wardrobe that can last for weeks and fits into a carry-on. In the daytime, she favors basic pants and tops in black and white with colorful cardigans for warmth and pizzazz (Tory Burch is a favorite). She wears her walking shoes on the plane and packs only lightweight ballet flats. For evenings out, she brings evening pants and a matching top—she has several sets made from stretch material by Jean Paul Gaultier—to wear with the flats. A pashmina doubles as an in-flight blanket. Wear and repeat is her mantra.