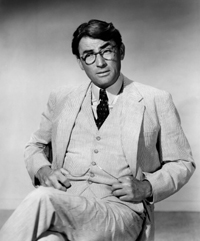 Since the moment he was introduced 50 years ago in Harper Lee’s novel, To Kill a Mockingbird, Atticus Finch has represented both an image lawyers crave and a standard that intimidates them.

In honor of that half century of service, we have decided to enshrine him in (perhaps consign him to) his own sanctum sanctorum—as a legal deity too lofty to allow comparison to a Denny Crane or a Patty Hewes. Instead, we’ve asked a few well-known writers and critics to share their thoughts on the gift to lawyers that is Atticus Finch.

I think a lot about Atticus Finch, but mostly due to the contrast to contemporary portrayals of lawyers. Atticus comes from an era when Americans were still willing to think of lawyers as paragons, as Atticus surely is. He is a single father who skillfully raises his kids, and a courageous lawyer willing to represent an innocent African-American accused of an inflammatory crime in a small Southern town in the days of Jim Crow. He is even the best shot in the county and, at least so far as his daughter reports, entirely chaste. Probably because Americans now have so much more interaction with the law and lawyers, they are no longer willing to see lawyers as dramatically more principled than the rest of us, and today’s legal fiction reflects that.

Scott Turow is a novelist and a practicing lawyer. His most recent novel is Innocent.

Network executives typically demand that lawyers be heroic defenders of innocent or ennobled clients. In most episodes, the champions of justice prevail. But legal victories are easy to come by in film and television. It’s a rigged operation. Much harder to find, and to create, are lead characters whose convictions are tempered by their human failings and their vulnerabilities. For me, Atticus Finch is one such powerful role model because his courtroom crusade shares equal weight with his role of father and protector. To Scout, he is not Dad but merely Atticus. A man. He is not always able to protect her just as he is not able to save his client from the angry mob. Atticus is imperfect in both worlds, stumbling at times, humbled by his own inadequacies, yet ultimately triumphant because we, his audience, appreciate his devotion in the face of great obstacles.

These are character elements to which TV writers, and most viewers, are drawn. The best of these episodes aspire to replicate what Harper Lee and Horton Foote brought to life in Atticus and what every lawyer practicing today should aspire to in their own sphere of practice—humanity.

Kessler is a writer-producer who has worked on The Practice, Rome, The Unit and The Good Wife.

By any conventional measurement, Atticus Finch was actually a terrible lawyer. He took on an absolutely unwinnable case that he, in fact, knew he couldn’t win. He received no fee for representing Tom Robinson, and ended up paying for the privilege of a lost and uncompensated cause by accepting the scorn of his community and only narrowly escaping a lynch mob. His children were mercilessly taunted at school, yet one of the reasons why he took the case was purportedly for their benefit—he said that he couldn’t parent them if he didn’t represent Tom Robinson. Huh? Some people just don’t take good notes in law school. Or just maybe Atticus operated in a parallel legal universe where the gravitational pull came not from the celestial stacks of a law library but from the moral sphere. Doing what was right was more important than what was merely legally correct. Anyone who passes the bar can file a complaint and go through the motions of a practicing lawyer. But not everyone believes that being a lawyer and being a righteous person shouldn’t be so different, after all.

Thane Rosenbaum is the John Whelan Distinguished Lecturer in Law at Fordham University and director of the Forum on Law, Culture & Society.

We regret to inform you that your services as a film hero will no longer be required by this organization.

While this was not an easy decision because of your long-standing tenure, a re-examination of the record fully supports your termination. You were unable to win an acquittal for your client, Mr. Robinson, despite overwhelming evidence of his innocence. While Mr. Robinson was saved from a lynch mob, this was surely not your doing; instead, it was the intervention of your children, who, ironically, you specifically instructed to stay home that evening. Aside from these professional limitations, your parental neglect in failing to shelter Jem and Scout from the hate and ignorance in your community is but another glaring shortcoming. And you no doubt would have acquiesced to the prosecution and imprisonment of a mentally challenged neighbor, one Mr. Radley, had not a law enforcement officer intervened on his behalf.

These are not the acts of a hero, Mr. Finch.

Moreover, it seems foolhardy to persist in revisiting dated injustices that have now been remedied in our open-minded, post-racial society. And in these challenging economic times, no one profits if audiences don’t feel cheerful and reassured as the final credits roll.

If these concerns were not dispositive, it has also come to our attention that you have actually inspired certain individuals to pursue legal careers.

We trust you will find continued service in the literary world, where consumers may still appreciate quaint, out-of-fashion stories and are known to be more forgiving of a hero’s personal deficiencies.

The Academy of Motion Picture Arts and Sciences

Richard Sweren is a writer and co-executive producer of the forthcoming NBC series Law & Order: Los Angeles. He spent 14 seasons as a writer with the original Law & Order series, writing or co-writing more than 60 episodes.