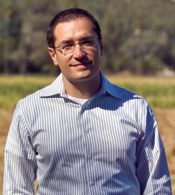 Most summers, operations manager Penny Carey says, only a few dozen teenagers apply at Kerkhoff Seed Farms for the tedious job of detaching wispy tassels from corn husks. She was astonished when 400 teenagers applied in 2007. Many were work­ing to help their parents pay bills—that’s how rocky the economy had become.

“To fill those jobs, I rely on Jacob,” Carey says.

Immigration attorney Jacob Sapochnick of San Diego has been the family farmers’ go-to guy for years. Without him, many farmers say, their crops might rot in the fields for lack of harvest laborers.

Sapochnick has a rare expertise in the labor-intensive H-2A visa process. H-2As are used by seasonal agricultural workers, who must prove that (a) they have residences in other countries they have no intention of abandoning, and that (b) they will be in the United States no longer than eight months. Sapochnick must also document that the farmers advertised for American workers before turning to H-2A labor.

His clients are clustered in the Midwest and along the West Coast.

“In the Deep South, farming is still a multigenerational occupation, so there are Americans who work in the fields,” says Sapochnick, whose wife spent much of her childhood on her grandparents’ tobacco farm near the French Alps. “But in the rest of the country, these foreign workers are critical to the survival of family farms.”

Most of his farm clients cannot afford hourly charges, so he negotiates a flat fee.

“There is this feeling of satisfaction working with farmers,” Sapochnick says. “They are the most grateful clients you can ever get.”

The H-2A workers are appreciative, too. Sapochnick recruits them via reputable labor contractors—often recommended by U.S. embassies—in Brazil, Central America, Eastern Europe and Asia. He looks for workers reared on family farms and ranches.

“Jacob found four young Brazilian H-2A workers for us one year,” Carey recalls. “The next summer, I met one of the young men. He was wearing a suit, jetting around America as a manager for a Brazilian wholesaler. Jacob brings us workers with a passion for agriculture—something very hard to find in America.”

Before the workers arrive, Sapochnick helps his farmers meet U.S. Department of Labor living standards. Farmers must provide adequate private living space and must pay the current market wage, which Sapochnick can help them calculate.

Recent changes in H-2A rules could bring more foreign workers in and affect Americans seeking such jobs. The Labor Department posted a final regulation, effective in January, stating farmers will no longer need to give American workers a first shot at jobs by advertising them.

It will also institute a new formula for calculating H-2A wages that would result in lower pay for foreign workers.

Farmworker Justice, a nonprofit group that provides agricultural workers free legal counsel, blasted the “midnight regulation,” so called because it is issued near the end of a president’s term and avoids congressional approval. In a statement, the Washington, D.C-based group said, “At a time when the jobless rate is at a 15-year high, they reduce obligations for growers to effectively recruit U.S. workers before applying to bring in guest workers for these jobs. … These midnight regulations will put farmworkers in this country back more than 60 years.”

Sapochnick maintains the regulations will streamline the process rather than harm American workers. He doubts the national recession will increase the number of Ameri­can workers willing to do the sort of field work performed by H-2A visa holders.

A graduate of California Western School of Law, Sapochnick published an e-book on NAFTA visas and writes the Visa Lawyer Blog.

He grew up in Israel speaking Eng­lish and Hebrew, learned Russian for his grandmother and is conversant in French thanks to his French-born wife.

A couple of his H-2A cases bloomed into a whole new set of immigration issues after the laborers met American women and fell in love while working on U.S. farms. But he empathizes with love at first sight: He met his future wife in Britain at a university party each of them attended on a last-minute impulse.

“I was actually headed to the library to study for the final test in contracts before the winter break,” Sapochnick remembers. “I did not pass that test, but I gained a wife and a partner for life.”