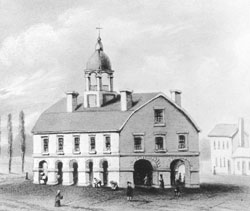 The U.S. Constitution provided only a bare outline of the judicial branch, so it was left to the first Congress to fill out the details. With the Judiciary Act of 1789, signed Sept. 24, it created 13 district courts, three circuit courts and a six-member Supreme Court (with two justices drawn from each circuit).

Three weeks later, John Jay was sworn in as chief justice and the court’s initial session was set for Feb. 1, 1790, at the Royal Exchange in New York City, the republic’s first temporary capital. Designed as an open-air market, the building had a second-floor meeting area, which the court shared with the state assembly. Before the court convened, city officials moved the market’s butchers and placed chains across the street so as to spare the court “interruption from the noise of carts.”

There was little to interrupt, however, for the session was postponed as only three justices were present. A quorum was reached the next day with John Blair’s arrival, but with no cases on the docket and no pressing business, the court soon adjourned. Its first term ended Feb. 10, with a few procedural matters decided and 26 attorneys and counselors admitted to the federal bar.