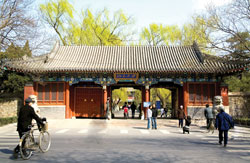 Students on campus at Peking University in Beijing, China. Photo by Imagine China via AP Images.

It looks as though the ABA Section of Legal Education and Admissions to the Bar won’t be accrediting foreign law schools anytime soon.

The council of the legal education section, which is recognized by the Department of Education as the national accrediting body for U.S. law schools, rejected the idea of accrediting foreign law schools by a 15-0 vote (with two abstentions) in August when it met in Chicago during the 2012 ABA Annual Meeting.

But the motion the council approved also acknowledged “the need to address the issue of identifying appropriate standards for licensing foreign lawyers who seek to practice in U.S. jurisdictions.”

The section, however, has no specific plans to address that issue, said Barry Currier, the ABA’s interim consultant on legal education. “That particular matter is one small piece of a bigger puzzle that will take time to work through in a satisfactory way,” he said.

Currently, only graduates of accredited U.S. law schools are entitled to take the bar exam in any state as a key step toward being admitted to practice, but many states also allow graduates of law schools outside the United States to take their bar exams within certain guidelines. In 2011, according to statistics gathered by the National Conference of Bar Examiners, 5,620 graduates of non-U.S. law schools took the bar exam in the District of Columbia and 28 states. Their total bar pass rate was 30 percent, compared to 74 percent for graduates of accredited U.S. law schools. The decision in August capped a four-year debate within the legal education section on whether to accredit foreign law schools that have based their educational programs on the American model, with its emphasis on the substance of U.S. law and professional ethics.

The issue first surfaced in 2008, when the Peking University of Transnational Law, a Chinese law school in Shenzhen that embraces the American model of legal education, announced its intention to seek ABA accreditation (but never did).

In response, the council appointed a special committee to study the issue. In 2010, the committee recommended that the section begin accrediting foreign law schools that meet its standards for U.S. schools. Doing so, the committee said, would give state supreme courts additional guidance in deciding which lawyers trained in other countries should be allowed to sit for a U.S. bar exam and help avoid a system in which the rules vary from state to state.

But the committee’s recommendation drew dozens of comments, many of them opposing the idea of accrediting foreign law schools. So the council appointed a second committee to study the matter further with extensive input from key stakeholder groups.

In Chicago, the council considered the second committee’s recommendation that the section refrain from accrediting foreign law schools. The committee maintained that doing so would divert the section’s attention and resources at a time of significant strain on its finances and personnel, and that it would require the development and implementation of appropriate procedures for monitoring compliance with the accreditation standards. Moreover, the committee said, it would be difficult to acculturate students educated at foreign law schools in the culture, values and ethics of the American legal system.

The committee based its recommendation on a survey of key stakeholder groups—including the Conference of Chief Justices, state bar examiners, bar leaders, law school deans and faculty members—which found little support for the idea of accrediting foreign law schools.

The survey results clearly left an impression on council members. Ruth V. McGregor, the retired chief justice of the Arizona Supreme Court whose term on the council ended Aug. 31, said accrediting foreign law schools would require a broad-based consensus among stakeholder groups in the United States, and “it’s clear we don’t have any such consensus.”