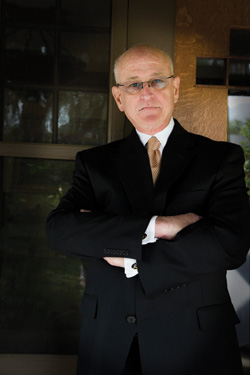 Edwin Reeser: “Amounts… demanded are increasing and might be as much as 60 percent if the firm goes underwater.” Photo by Sal Owen.

Buffeted by a weak economy and a shaky market for legal services, law firms are increasing their demands for contributions from partners—on terms, some partners complain, not always favorable to the contributor.

In some cases, partners are taking their cases to court. In October, Melanie Willems, a former London-based Chadbourne & Parke partner, demanded the return of $127,000 in contribution capital, claiming Chadbourne should have repaid her the money within weeks of her departure for the Houston office of Andrews Kurth in late September.

“We are seeing an increase in the number and the size of loans for partners’ capital contributions,” McKenney says. “In a historical context, we’ve analyzed the industry by size of firm—as in small, medium or large—and we found that regardless of size, we saw there was a consistent pattern of firms increasing their demands for contributions from equity partners.”

Among the reasons for the increase is the 2008 credit crunch, “when many firms said, ‘We’d like to be less reliant on the banks,’ so they’ve become more reliant on partners,” McKenney says. “Also, through this recent period there have been a series of technological changes. Firms have needed to spend for new financial reporting packages. Because of a lot of investment activity, many firms made the decision to seek a balanced mix of debt and equity—equity being partner capital.”

McKenney adds that there’s a “behavioral aspect, as many law firm leaders say a higher partner capital investment reinforces the notion of ownership. It’s the ‘skin in the game’ argument.”

McKenney calls the trend “a very prudent and measured response to the change in firms’ operating environment. And, by and large, it has worked for firms in a time when demand is flat.”

Edwin Reeser, an Altadena, Calif., sole practitioner, former BigLaw partner and frequent author of articles on law firm management, says it would not be uncommon for an Am Law 100 firm to seek a standard contribution of about 35 percent of that partner’s projected income for the year—say, $350,000 on a projected $1 million payout.

“So you go to the bank the firm has a relationship with,” Reeser says, “and in the $1 million example, you have to pay that back on a five-year loan, so every year you’d pay down 20 percent,” including interest.

Reeser says 35 percent may not be the ceiling. “Amounts of money demanded are increasing and might be as much as 60 percent if the firm goes underwater,” he says, “but you still have a personal loan to the bank you have to pay off.”

The return of the contribution upon leaving the firm can also become an issue. “It can be harder to get these sums back when you leave,” Reeser says. “The problem is, these firms are under serious cash flow pressure.”

Partners face a potential cash flow crisis of their own when they need to tap Peter to pay Paul. “You just left law firm A to go to law firm B,” Reeser explains, “and you can’t get your dough out of A and you need dough for B.”

Reeser says many of the firms that convert so-called ‘tier 2’ or nonequity partners into equity partners with smaller profit shares and larger salaries also adopt a three-to-five-year capital payback program when those partners leave. “Basically, the first payment is not until one year after the date of departure,” he explains. “Then … a capital payback begins for anywhere from 36 to 60 monthly installments, with no interest. That means it takes from four to six years to get your money back.”

A nonequity partner, speaking with the ABA Journal anonymously for fear of possible repercussions from the law firm, complains of being treated as a “contract partner, essentially an employee,” who was forced to contribute a percentage of salary to the firm.

“The loan you took out as the contribution was interest-bearing,” the partner says, “but the firm is not paying any interest on that loan,” which in this case has a five-year term. Under the partner’s agreement, the firm returns the capital over a four-year period, “so I had to wait 13 months to get the first installment. The bank sends me the bill for the interest—so, in effect, the firm has an interest-free loan for five years.”

The partner describes “being screwed by the firm; it shouldn’t be that way.” In a prior firm, “I got my money in under a year, paid in lump sum with interest.”

While acknowledging the terms of the loan repayment were in the contract, the partner terms it “a contract of adhesion,” that is: “Take it or leave it. That doesn’t make it right.” The partner says the same financial arrangements apply to equity partners at the firm as well. Regarding paybacks, McKenney acknowledges it’s harder for partners to get their money back.

“A decade ago law firms would return the contribution capital to partners shortly after departure,” he notes. The longer payout of three to five years, he says, “makes the departing partner really think about leaving.”

This article originally appeared in the May 2014 issue of the ABA Journal with this headline: “First In, Last Out? Firms raise partners’ contributions, delay payback.”