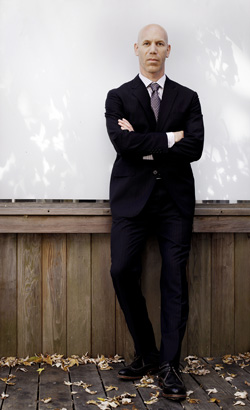 Jonathan Jaffe: “I didn’t doubt whether I should be pursuing the case. But I did doubt my own abilities.” Photo by Sal Owen.

Jonathan Jaffe has worked thousands of hours on a single case and hasn’t yet earned a cent. And he may never. But he’s certainly made a name for himself.

The 2009 University of San Francisco School of Law grad took on the behemoth Facebook in a class action over the social network’s policy allowing advertisers to promote users’ “likes” of their products with so-called sponsored stories. The company agreed—twice—to settle and change its practices. But Jaffe’s not guaranteed a payday, what with court approval (a hearing was set for Nov. 15, after this issue’s deadline) and objectors still looming as obstacles.

Still, Jaffe’s immersion course in class actions afforded him a legal education few recent grads experience. And it has whet his appetite to do work he really cares about—protecting consumers’ privacy rights.

Jaffe’s early success almost certainly stems from his unique merger of tech and legal skills. To pay his way through grad school, he taught himself computers and “fell into” data security, building high-end security systems for banks and other institutions, and made a living since 1997. The pay was “quite good,” reports Jaffe. But you know how the story ends. “It wasn’t intellectually stimulating, and I knew I was going to be a lawyer since I was a kid,” he says. “I used to watch The Paper Chase with my mom and thought it was the coolest.”

Fresh out of law school and waiting to hear whether he passed the California bar, Jaffe again turned to self-teaching—this time e-discovery. He’s now about 95 percent done writing an e-book on the subject.

When he learned he’d passed the bar, Jaffe started his own practice. “I wasn’t interested in getting a job as an associate; and I have a mortgage, a wife and two kids in private school,” he says. “So I took on a few small cases to get my feet wet and started doing e-discovery consulting. The e-book ended up getting me involved in class actions, doing e-discovery for small plaintiffs firms that have no real experience in data. Then I developed my own case.”

Formally, it’s called Fraley v. Facebook. Within 24 hours of news that Facebook had introduced sponsored stories, a friend alerted Jaffe (who’s not a Facebook user). Jaffe spent a week or so researching the law and another few weeks drafting a complaint. “I didn’t doubt whether I should be pursuing the case,” he says. “But I did doubt my own abilities. I’d never taken on a class action before.”

Jaffe, whose practice is based in Berkeley, Calif., pitched the case to the Arns Law Firm in San Francisco. “It took a while to convince them it was a good case—a real claim with a real violation and could be supported by case law,” he says.

Facebook evidently considered it real, first agreeing to settle just before a June class certification hearing. Under that proposal, the social media giant was to donate $10 million as a cy pres fee to organizations that protect consumers’ privacy. But Judge Richard Seeborg of the U.S. District Court for the Northern District of California rejected a motion for approval in August, questioning whether the cy pres payment was fair, adequate and reasonable.

By October, Facebook had offered a new settlement of $20 million, with up to $10 to be paid to each Facebook user who appeared in sponsored stories. Under the previous offer, the social media giant would pay up to an additional $10 million in attorney fees. Jaffe will get a cut of any amount recovered.

That is, of course, if the case gets court approval and makes it past objectors. Ted Frank, founder of the Center for Class Action Fairness in Washington, D.C., grudgingly gives Jaffe props for taking on Facebook, but adamantly opposed the cy pres settlement because it wasn’t “really doing anything to benefit clients.” (Frank did not respond to requests for comment on the new settlement offer.)

Credit is fine, but Jaffe is hoping something more remunerative is also in the offing.

“I’ve taken on significant personal risk in this case, and to pay the mortgage I still do data security work,” he says. “But I’m going to continue down this path. I have other cases in the works. Hopefully someday one will pay, and that’ll make my wife very happy.”