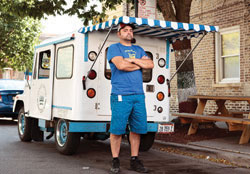 Greg Burke is suing the city of Chicago: “I don’t think they really listened to us. They just did what they wanted to do.” Photo by Saverio Truglia.

Adding to the friction, truck advocates say, is the existence of many regulations established well before the advent of today’s sophisticated gourmet trucks—many of which have culinary-trained chefs cooking on board—at a time when street food was limited to hot dogs, ice cream and pretzels.

“Cities are scrambling around,” says Richard Myrick, editor-in-chief of Mobile Cuisine, an online trade publication that tracks food-truck trends. “They look at the laws they have on their books; they’re either related to old ice cream truck ordinances or they have nothing.”

Regulations also vary widely by jurisdiction, he says, with cities such as Chicago and San Antonio seen by truck owners as overly restrictive and others, including Portland, Ore., and Austin, Texas, as more fair domains where trucks and brick-and-mortar restaurants manage to coexist harmoniously.

The truck owners, mostly fledgling entrepreneurs, typically lack funds to open full-blown restaurants, and some see truck ownership as a path to eventually opening a permanent establishment. With little money for legal battles, they have found support in the Arlington, Va.-based Institute for Justice, a libertarian public-interest law firm upholding free-market principles.

“We started seeing a lot of instances where governments were regulating food trucks not to protect consumers or to prevent traffic problems, but because a few politically connected businesses didn’t want the competition,” says Robert Frommer, the institute attorney who is handling Burke’s case.

“Governments are perfectly capable of regulating for health and safety,” he says. “But they shouldn’t be picking winners and losers.”

The institute first took up the cause on behalf of trucks in 2010 when it launched the National Street Vending Initiative, an effort to level the playing field between trucks and restaurants across the country. It filed its first suit in federal court against the city of El Paso, Texas, in 2011, challenging El Paso’s mobile vending rules, including one that prevents trucks from parking within 100 feet of permanent establishments.

Three months later El Paso eliminated the restriction. The institute also won a victory in a Georgia state court after the city of Atlanta attempted to outsource mobile vending rights to a single provider. And outside of Miami, it has a suit pending on behalf of street vendors in Hialeah, Fla., who are required to keep moving unless flagged down by a customer.

Burke’s case was filed in an Illinois court on behalf of Schnitzel King and another food truck operator, Cupcakes for Courage. Burke v. City of Chicago alleges that the 200-foot rule and other restrictions, including a required GPS tracking system on all trucks, violate the due process clause of the Illinois Constitution. It is making its way through the courts.

“Due to the ubiquity of the brick-and-mortar restaurants that serve food, the 200-foot proximity restriction prohibits plaintiffs from vending in large swaths of Chicago, including virtually the entire downtown area known as ‘the Loop,’ ” says the amended complaint, filed in March. It later adds: “The sole purpose of the proximity restriction … is to protect fixed businesses from competition by mobile vendors, including plaintiffs.”

An attorney representing Chicago in the case did not respond to a request for comment, nor did a spokeswoman for the Illinois Restaurant Association.

Dan Rosenthal, a Chicago restaurateur who owns seven downtown restaurants, says permanent establishments such as his have disproportionately higher fixed costs than mobile rivals, including taxes, build-out expenses, maintenance and utilities. They should be able to operate without the threat of encroachment.

“It’s not about food service and people getting into business and all the rest of this,” Rosenthal says. “It’s about the parity, the justice of having somebody locate a business in an area without paying the dues associated—paying fairly for the right to be in that area. That’s what it boils down to.”

Myrick and other supporters say that food truck competition improves the overall quality of food in cities where trucks operate, widening consumer choice with selections such as gourmet burgers and high-end cupcakes and pastries.

Elsewhere around the U.S., particularly in highly populated cities, food trucks have found strength to combat views similar to Rosenthal’s by banding together.

In Los Angeles, where traditional taco trucks known as “loncheros” have operated for generations, truck owners in 2010 formed the Southern California Mobile Food Vendors Association. It was an effort to contend with a wide range of confusing and sometimes protectionist ordinances in LA and Orange counties, says its CEO, Matt Geller.

Geller says his group “wanted to make sure every member understood the regulations that they were dealing with on a daily basis.” In its effort to change food-truck rules in more than 20 cities in Southern California, including Santa Monica, Burbank and Manhattan Beach, the organization has filed 13 lawsuits.

“The mobile food business is very, very tough,” says Geller, a lawyer by training. “Thankfully, we have the courts to fall back on. Our intention is always to work with cities, and we have successfully done so quite a few times.”

His group has also assisted other cities, including Columbus, Ohio, Minneapolis, New York and Philadelphia, in modeling similar organizations.

After a protracted battle between truck owners and restaurateurs, Washington appeared to compromise in June when the D.C. council passed final regulations governing trucks. The solution was to allow for designated mobile roadway vending zones, a reduction in the amount of unobstructed sidewalk space that must be adjacent to a food truck, reduced parking fees and other allowances.

“They have gotten a lot of concessions,” says Kyle Rees, communications manager for the Restaurant Association of Metropolitan Washington, about the truck owners. “Thank God it was over—I think one of the council members said this was one of the most overdone, played-out city soap operas and everybody is just tired of watching it.”

The drama, however, is certain to continue in other cities as the trend shows no sign of abating.

“Food trucks continue to grow in popularity among consumers,” said the National Restaurant Association in its 2013 industry survey. The association, which declined to comment for this story, said its 2012 National Household Survey found that 43 percent of adults polled said that they had purchased items from a food truck.

This article originally appeared in the November 2013 issue of the ABA Journal with this headline: “Beef on a Roll: Food truck vendors dig in for a piece of street turf.”