For Mail-Order Brides, Happily Ever After

Layli Miller-Muro isn’t down on love. She doesn’t hate men, and she doesn’t want to prevent them from following their hearts—even to other countries.

But she does want to make sure that foreign women who meet American husbands through online matchmaking services—self-described international marriage brokers—aren’t abused, enslaved or trapped in difficult situations. 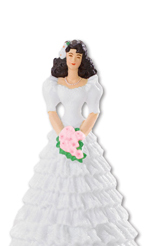 As founder and executive director of Tahirih Justice Center—a wom­en’s rights organization based just outside Washington, D.C., in Falls Church, Va.—Miller-Muro fights for the rights of mail-order brides.

Most significantly, Miller-Muro helped author the International Marriage Broker Regulation Act, which was signed into law in 2006. The act is designed to alert would-be brides to Lotharios masquerading as Romeos.

Getting legislative support for the act went off without a hitch. “Immi­grant rights and women’s rights—the left likes that,” she says. “The right likes not using the institution of marriage as a cover for abuse.”

The act compels international marriage brokers to obtain crimi­nal histories on their male clients, including any records from the Na­tional Sex Offender Public Registry, and to hand the information over to the foreign women after it is translated into their native language.

The act also limits the number of fiancee visas that Americans can petition for, and it requires that all brides-to-be receive an information packet that tells them about domestic violence resources.

The brokers objected, claiming the act was unconstitutional. But so far, the law’s been upheld—most recently by the U.S. District Court for the Northern District of Georgia in European Connections & Tours Inc. v. Gonzales, No. 1:06CV00426 (March 26, 2007). Judge Clarence Cooper supported Tahirih’s assertion that immigrant women suffer a higher rate of domestic violence than American women, and he compared the act’s background checks on American men to the background checks required of people buying handguns.

No one is sure exactly how big the mail-order bride industry is in the United States. The language of the International Marriage Broker Regulation Act estimates 8,000-12,000 men use brokers to find foreign spouses, but Tahirih puts the number much higher—around 11,000-16,500, based on the number of foreign women entering the country each year on fiancee visas sought by the 400 or so U.S.-based brokers. Miller-Muro became engaged in the struggle in 2002 after a Ukrain­ian woman named Nataliya Fox came to the center for help.

Fox had met and married an American through a Rockville, Md.-based company called Encounters International. When he started abusing her, she turned to the company for advice and was told she’d be deported if she left the relationship.

“One of the things I love about this work is being able to be the Goliath in the room,” says Miller-Muro. “Giving a woman the power of having four suits in the room behind her—it’s an incredibly empowering thing.”

Miller-Muro says it’s difficult to measure what effect the act has had. Many of the marriages that might turn abusive were entered into before IMBRA was enacted, and it’s impossible to gauge how many women declined proposals from suitors with unsuitable pasts.

But the act will make a difference, she says. That is, as long as the government fulfills its obligations under the law and keeps the brokers in line. And she’s vowed to make sure that happens.

“Now we’re working on enforcement,” she says, to make sure that even mail-order brides get a chance at happily ever after.