A Question of Education: For Some Parents, Shock Treatments Are Only Hope for Helping Their Kids 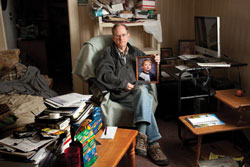 Charles Bryant’s son “D.B.” has been diagnosed with pervasive developmental disorder and intermittent explosive disorder. D.B., who just turned 18, has been “out of control” for most of his life, according to his father. He hits and kicks when he doesn’t get his way.

“If you can visualize a child in the ‘terrible twos,’ my son is still in that,” says Bryant of Saranac Lake, N.Y. “You say no to him, you’ve got a problem.”

So, in desperation, Bryant sent his son to the Judge Rotenberg Center, a residential special-education facility in Canton, Mass.

Bryant hoped his son would benefit from the use of electric shock and other forms of aversive intervention.

“He can’t get an education because of his behavior, and he’s getting older. His window of opportunity is closing,” says Bryant. “The drugs made him worse, and I know that this could help. It gets your attention, and it’s a whole lot better than all these drugs.”

The Judge Rotenberg Center has traditionally administered aversive behavioral interventions to individuals whose behavior is considered so problematic and disruptive that it impedes their education.

But in 2006 New York’s department of education banned the use of aversive interventions such as electric-shock skin therapy. The state regulations apply to New York children with disabilities, even if they are attending out-of-state schools.

The Judge Rotenberg Center is the only facility in the U.S. that uses shock treatment for children with disabilities.

The families of D.B. and six other New York students attending the out-of-state facility filed a federal lawsuit in 2010 claiming the students have been unable to receive the therapies their parents were hoping would help their severe behavioral disorders. They hope to overturn the ban against electric shock and other aversive interventions.

But to disability rights advocates and human rights organizations, the use of aversive treatment—and, more specifically, electric shock—is unnecessary and inhumane. While some studies have found certain types of aversive intervention effective, other studies say that different forms of behavioral modification, such as positive intervention, are more successful. In addition, advocates say, the idea of physically hurting a child, especially one with disabilities, crosses a moral line.

In fact, in their lawsuit, the New York parents use IDEA to argue that their children are being denied their right to a free and appropriate public education. In addition, they argue that the state’s ban violates their children’s constitutional rights because it is arbitrary and oppressive.

According to the suit, the Judge Rotenberg Center is considered a facility of last resort for children with severe behavioral disorders, including extreme aggression and self-mutilation. Founded in 1971, the center provides behavior modification treatment for 215 special-needs children and adults from seven states, generally without the use of psychotropic drugs. On its website, the center states that the shock intervention it employs is used only after other procedures have failed.

The shocks are administered with an extensive list of safeguards, the center states on its website, where it describes the electric shock treatment as a two-second shock to the surface of the skin.

“The skin-shock feels like a hard pinch but is otherwise harmless and has no side effects,” states the site.

The center describes how some children, before coming to the facility, have gouged out their eyes or attempted suicide by swallowing razor blades. “These children have been in many different institutions, psychiatric hospitals and residential schools,” says Michael P. Flammia, the lawyer for the plaintiffs in the case.

“They’ve been on medication with very serious side effects. These children engage in self-mutilation. They violently attack people. Their head hitting is so bad they’ve caused permanent damage to their brains and they’ve pulled out their own teeth. These are obviously very severe, life-threatening behaviors.”

Flammia says that the children he represents need “effective treatment not only to preserve their lives, but also to get an education.”

“It’s our position in this case that the only effective therapy that will work for them is behavior treatment with aversive interventions,” says Flammia, who specializes in education law and litigation in the Boston office of Eckert Seamans Cherin & Mellott.

But so far, the courts have not agreed. In 2010, U.S. District Judge Gary Sharpe summarily dismissed the complaint. In August the 2nd U.S. Circuit Court of Appeals at New York City affirmed.

Writing for the majority on the three-judge panel in Bryant v. New York State Education Department, Chief Circuit Judge Dennis Jacobs found that outlawing the use of aversive interventions did not prevent the children from receiving an individualized plan for their education.

“New York’s regulation prohibits only consideration of a single method of treatment without foreclosing other options,” Jacobs wrote. He added that the judiciary is “not institutionally suited to now second-guess the policy decisions made by experts charged with formulating education policy in New York.”

“We are extremely pleased with the 2nd Circuit’s decision supporting New York’s regulations, which prohibit the use of aversive interventions,” says Jonathan Burman, spokesman for the New York State Education Department. “We worked hard for this decision on behalf of New York’s children with disabilities. Children with behavior challenges are entitled to receive high-quality positive behavior interventions and support.”

In recent years, the center’s methods have come under increased scrutiny. In April, the mother of an autistic boy settled malpractice claims against the facility at the start of jury deliberations. While the amount of the settlement has not been disclosed, the trial featured video of the son’s treatment, during which he screams, as he is shocked repeatedly.

Meanwhile, Juan Méndez, the U.N. special rapporteur on torture, is investigating the center after receiving a complaint from Disability Rights International, an organization dedicated to promoting human rights and full participation in society of people with disabilities worldwide.

The U.S. Senate Committee on Health, Education, Labor & Pensions held a hearing over the summer to discuss alternatives to aversive treatment programs. And media outlets, including CNN, have focused on the Judge Rotenberg Center’s use of its skin-shock treatment device, known as the graduated electronic decelerator.

Disability rights advocates say they are encouraged that the use of aversive interventions has come under increased scrutiny. But they are concerned that the process of completely eliminating electric shock therapy for children with disabilities is taking far too long.

“There are certain actions that are ethically and morally unacceptable,” Schwartz says. “The purposeful infliction of pain on children with disabilities is one of them, just like waterboarding of suspected terrorists is now illegal under the executive order of the president.”