For the Word Lovers: A look at linguistic phenomena 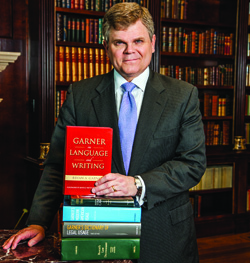 How do you feel about hard words? You may think they’re dangerous because they turn off readers. That they’re boringly ostentatious. That they’re hopelessly pretentious. Yet technical terms undoubtedly have a place—not before juries, perhaps, but in the heads of those who appreciate words that denote ideas for which there are no simpler equivalents.

Although I’m a plain-language advocate, I know as a writer on language that we have some delightfully recondite—excuse me, recherché—words to denote linguistic phenomena. If you’re a language lover and want to expand your knowledge about words, read on. But brace yourself for a bit of sesquipedality (that’s an autological word, exhibiting the very characteristic it denotes, like polysyllabic and curt). The words you’ll encounter here are for word lovers—and essentially no one else. To word lovers, a fear of sesquipedalian terms (big words, literally “a foot and a half long”) is a manifestation of logophobia. This space is for logophiles.

Have you ever wondered what it’s called when a speaker adds a superfluous syllable to the middle of a word, as by pronouncing athlete as /ATH-uh-leet/ instead of /ATH-leet/? Or Realtor as /REEL-uh-tur/ instead of /REEL-tur/? There’s a word for it: epenthesis (/ee-PEN-thuh-sis/). Just knowing this term could have a preventive (not “preventative”) effect on mispronunciations.

There are nuanced layers of technicality within the astonishingly large English vocabulary. For vowel epenthesis, as with the schwa sound that some speakers insert in athlete and Realtor, the more precise term (I kid you not) is anaptyxis. And what’s the word for the vowel itself—the one that gets thrust into the middle of a word so needlessly? We had to go to Sanskrit to import a word into English, and now it finds itself nicely ensconced in unabridged English dictionaries: the svarabhakti vowel (/swahr-uh-BAHK-tee/).

Like the Molière character who didn’t realize he’d been speaking prose all his life, you may not have known that you’ve been hearing (perhaps even pronouncing) svarabhakti vowels all your life: mostly the epenthetical schwa.

There seem to be names for every linguistic phenomenon imaginable. Former Sen. Bob Dole’s tendency to refer to himself in the third person (“Let me tell you what Bob Dole thinks,” Dole said) is known as illeism (/IL-ee-iz-uhm/). President Barack Obama’s tendency to refer to himself in the first-person plural isn’t really the royal we (we have no monarchy): It’s known as nosism (/NOHS-iz-uhm/). Well, I say these things are known; but they’re not much known, I fear.

What’s it called when an entire word gets thrust into a whole nother word? As in a whole nother? It’s called tmesis (/TMEE-sis/). Absobloomin’lutely.

What’s it called when sounds are dropped from the middle of a word or phrase? For this, we have a Greek import: syncope (/SIN-kuh-pee/), which is related to syncopation. Alert listeners’ hearts skip a beat when someone pronounces probably as “problee” (or “prolly”). And traditionalists bristle at the syncopated mispronunciation of poinsettia, which correctly has four syllables, not three. But some old instances of syncope are so well-established that it’s departures from them that are considered incorrect: extraordinary is pronounced in five syllables, not six.

If the dropped sounds or syllables are at the end of a word, it’s called apocope (/uh-POK-uh-pee/): Lots of high school seniors work on their college apps when not playing with their phone apps. The same principle is at work with shortened names like Barb, Ben, Deb and Vince. Or with sports teams like the Cards, the Mavs and the Pats.

If the omission occurs at the beginning of the word, you might expect to be coping with another -cope word. But no, that’s where the language throws a curve: It’s aphaeresis (/uh-FAIR-uh-sis/). (Those Greeks loved this stuff.) Think of names like Gene, Rita, Trisha and Xandra.

All these word-shortenings are collectively called “clippings”—a surprisingly unsesquipedalian word, given the company it keeps. Of course, Americans like their words short, sometimes lopping off the beginning and the end of a word all at once, as with flu and fridge.

When sounds get reversed instead of omitted—think of irrelevant morphing into “irrevelant”—it’s called metathesis (/muh-TATH-uh-sis/). When you flounce onto a “chaise lounge” (it should be chaise longue [/shayz-long/]), tasting a “fruit melody” (it’s a fruit medley), dressed in “jodphurs” (no, it’s jodhpurs [/JOD-purz/]), you’re metathesizing. Sounds awful, doesn’t it?

The snoots who read this column probably remember synecdoche and metonymy. Synecdoche (/si-NEK-duh-kee/) is the metaphor by which a part of something refers to the whole of it. Wearing your best threads, you drive your wheels to break bread with your own flesh and blood. And metonymy (/muh-TON-uh-mee/) is the metaphor by which something related to (but not part of) a thing becomes the name for that thing. While on the red-eye from LA to New York to see your favorite actor on Broadway, you check on Wall Street to find out whether the market is a bull or a bear. The two best metonymic terms in law? Bench and bar.

There are many other terms for word lovers to relish, from accismus (/ak-SIZ-muhs/—a feigned refusal of something ardently desired) to hypocorism (/hI-POK-uh-ris-uhm/—a pet name, Daddykins) to zeugma (“I lost my wallet and my temper”). The weirdest is probably ecthlipsis (/ek-THLIP-sis/), the suppression of one or more sounds in a word: Think of the d in Wednesday or t in often (as preferably pronounced: /OFF-uhn/). When ecthlipsis occurs, the deleted sound is called an aphthong (/AF-thong/). Please don’t say it’s all Greek to you.

One of my favorites is the Wellerism, deriving from the Dickens character Sam Weller, Mr. Pickwick’s witty servant in The Pickwick Papers. The Wellerism is a punning simile in which words are humorously attributed to someone or something. “It all comes back to me now,” as the captain said after spitting into the wind. “We are not what we seem,” as the needle said to the thread.

You can make up Wellerisms endlessly. And once you get the hang of it, you may have an aha moment: “It all makes sense to me now,” you may say, as the customer said to the cashier after asking for change in pennies. “Precisely!” as William Safire might have responded when asked how best to handle words.

If you delight in technical terms and are an aficionado of classical rhetoric, check out Farnsworth’s Classical English Rhetoric. The dean at the University of Texas law school, Ward Farnsworth is perhaps the world’s leading expert on classical figures of speech.

Farnsworth doesn’t shrink from using big words and teaching about them. The very first word in his very first chapter I’ve long considered my all-time favorite since discovering it at age 16: epizeuxis (/ep-i-ZOOK-sis/), meaning emphatic repetition of a word. Think of Hamlet’s answer to Polonius, who asked what he was reading: “Words, words, words.”

And what if it’s a phrase that gets repeated, not a single word? That’s called epimone (/ee-PIM-uh-nee/). Think of perhaps the greatest 19th-century lawyer, Daniel Webster, speaking on the Senate floor in 1833: “The cause, sir, the cause! Let the world know the cause!” Or, if you prefer, the character Tattoo in the 1970s series Fantasy Island: “The plane! The plane!”

What’s it called if words come between the words or phrases that are repeated? Conduplicatio (/kon-doo-pli-KAT-ee-oh/), Farnsworth tells us—or, if a few words intervene, diacope (/dI-AK-uh-pee/). He cites Henry Grattan’s speech before the Irish Parliament in 1793: “No lawyer could say so; because no lawyer could say so without forfeiting his character as a lawyer.”

What’s it called if a word that appears at the beginning of a sentence is repeated at its end? Epanalepsis (/EP-uh-nuh-LEP-sis/). Think of Brutus’ speech at the funeral of Julius Caesar (in Shakespeare’s revision, of course): “Hear me for my cause, and be silent that you may hear: Believe me for mine honor, and have respect to mine honor, that you may believe.”

Now you may think this is all very hoity-toity and absurdly eggheaded. Perhaps. But these kinds of rhetorical devices occur all the time in good political speeches—and bad ones. And they appear in popular culture. Think of the song from Mr. Ed, the popular 1960s TV show. The lyrics use diacope followed by epimone: “A horse is a horse, of course, of course.” Of course!

Perhaps you have no interest in the names and technical classifications. Fine, fine, fine. If so, you’ll probably never really realize that these devices exist or how they work in language. Yet if you do have an interest in these rhetorical devices, you can do no better than to read and digest Farnsworth’s guide, with its copious examples.

But be forewarned: This stuff isn’t to everyone’s taste. Don’t try it out as dinner conversation except among the most rarefied intellectuals. It’s best kept as a private, secret, closeted interest. Sad but true; true but sad.