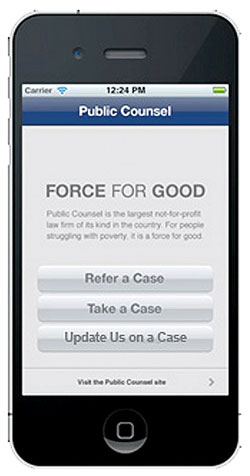 Apps have become an increasingly common marketing technique for law firms, so why not use one to create direct lines of communication between lawyers, clients and potential clients?

“We are constantly looking for the experience of other volunteers so we can serve them better,” says Hernan Vera, PCLC president and chief executive officer. “What better way to give people a way to connect with us and give us information on people who we can help and at the same time keep in touch with our existing volunteers?”

The firm wants volunteers to download the app when they accept a case so they can give the center routine updates, according to Vera. Cases can take years to resolve and the firm doesn’t want to pester volunteers for information.

“We want to be in constant communication with our volunteers to make sure they have the tools to succeed,” Vera says.

Users of the app can also browse titles of cases in need of lawyers, including defense against a bad-faith lawsuit and a charity needing representation in landlord-tenant litigation. There’s also a section that allows members of the public to refer a case to the PCLC by entering name, email address and information about the legal issue.

Because the Public Counsel Law Center didn’t start actively pushing its app until a few months ago, the number of users is modest, but a firm spokesman says it already has received some case referrals and volunteers.

The app currently is only available for iPhones and iPads, but the center expects to launch an app for Android in the near future.